Not all smoke detectors are created equal.

It’s a subject that’s received attention recently with the deaths of five people in a house fire on New Jersey Street.

A firefighting captain from Boston caught wind of the fire – and a survivor’s statement that she heard the smoke alarm going off in the home – and contacted the Journal-World to say it could be an example of what he considers a life-or-death issue that the public largely doesn’t understand. Many people, he said, get a false sense of security from their smoke detectors.

“I do not want to send a message that smoke detectors do not work,” the firefighter, Jay Fleming, wrote to the Journal-World. “But I do believe that one type … is far superior to the most common type.”

Fleming, who has a fire-safety consulting business and has spent years researching and writing about smoke detectors, is concerned with the following statistic: Studies have shown that in roughly a third of fatal fires, there’s evidence a smoke detector was working. Why so many deaths when the smoke detector sounded?

He believes it’s partly because, by far, the most common type of detector in use is the so-called “ionization” model. It’s run on a 9-volt battery, easy to install, and sells for as little as $5.99 in Lawrence. 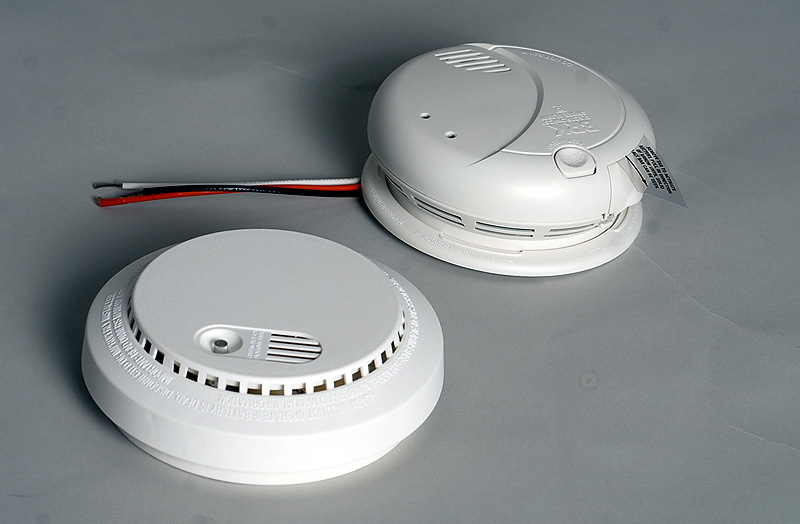 The problem is that research has found those types of detectors don’t work well at detecting “smoldering” fires- for example, one caused by a cigarette coming into contact with furniture. Smoldering fires often can take hours to develop, Fleming said, and often happen at night, when they are least likely to be detected by a human.

The other type of smoke detector is the “photoelectric” variety, which costs $20 and up. They often must be hard-wired because they require more power than the ionization-style detector, and, they’re much harder to find on the shelves of local hardware stores.

Photoelectric detectors were shown to catch smoldering fires between 12 and 30 minutes earlier than ionization models, according to a 2001 study by the National Institute of Standards and Technology.

The cause of the fire on New Jersey Street, which broke out in the middle of the night, has not been determined. Investigators said only that it started on the front porch and could have been electrical or had human causes.

Fleming said he’s not suggesting he knows what caused the fire – just that it fits the pattern of what he has seen in his readings about ionization smoke detectors.

There are two types of smoke alarms that work in different ways.

¢ Requires more energy and often is hard-wired into a home

¢ Uses a light beam to detect products of combustion

¢ Found in a 2001 study to react between 12 and 30 minutes faster to smoldering fires, compared with ionization detectors.

¢ Best suited for rooms containing “highly combustible materials” that can create flaming fires, such as flammable liquids or papers.

According to an April 2006 paper by the Public/Private Fire Safety Council, ionization types of smoke detectors were found to have “unsatisfactory” performance – available escape time less than what’s required to survive – in fires that involved 30 to 120 minutes of initial smoldering.

Fleming said research on the subject of why people die in fires despite a working smoke alarm often centers on human factors – how soundly they sleep, for example – rather than exploring the possibility that the type of smoke detectors played a role.

In the 1980s, industry standards were changed to make ionization detectors less sensitive in order to reduce false alarms.

“The photoelectric ones are the ones that typically will react whenever you have a smoldering fire,” he said. “They do well in those.”

Barr said he has photoelectric detectors in his own home but also has ionization detectors, which he says are better than not having anything at all.

Barr said he could not comment on what type of smoke detector was in the home that burned on New Jersey Street, but that typically ionization detectors are found in older homes.

Charles Glover Jr., son of Charles Glover Sr., who died in the house fire along with four of his grandchildren, said he didn’t know what kind of detectors the family had but that he suspected it was a battery-powered detector, not hard-wired.