Some schools teaching Thanksgiving with more sensitivity to American Indians

Long Beach, Calif. ? Teacher Bill Morgan walks into his third-grade class wearing a black Pilgrim hat made of construction paper and begins snatching up pencils, backpacks and glue sticks from his pupils. He tells them the items now belong to him because he “discovered” them.

The reaction is exactly what Morgan expects: The kids get angry and want their things back.

Morgan is among elementary school teachers who have ditched the traditional Thanksgiving lesson, in which children dress up like Indians and Pilgrims and act out a romanticized version of their first meetings.

He has replaced it with a more realistic look at the complex relationship between Indians and white settlers.

Morgan said he still wants his pupils at Cleveland Elementary School in San Francisco to celebrate Thanksgiving. But “what I am trying to portray is a different point of view.”

Others see Morgan and teachers like him as too extreme.

“I think that is very sad,” said Janice Shaw Crouse, a former college dean and public high school teacher and now a spokeswoman for Concerned Women for America, a conservative organization. “He is teaching his students to hate their country. That is a very distorted view of history, a distorted view of Thanksgiving.”

Even American Indians are divided on how to approach a holiday that some believe symbolizes the start of a hostile takeover of their lands.

Chuck Narcho, a member of the Maricopa and Tohono O’odham tribes who works as a substitute teacher in Los Angeles, said younger children should not be burdened with all the gory details of American history. 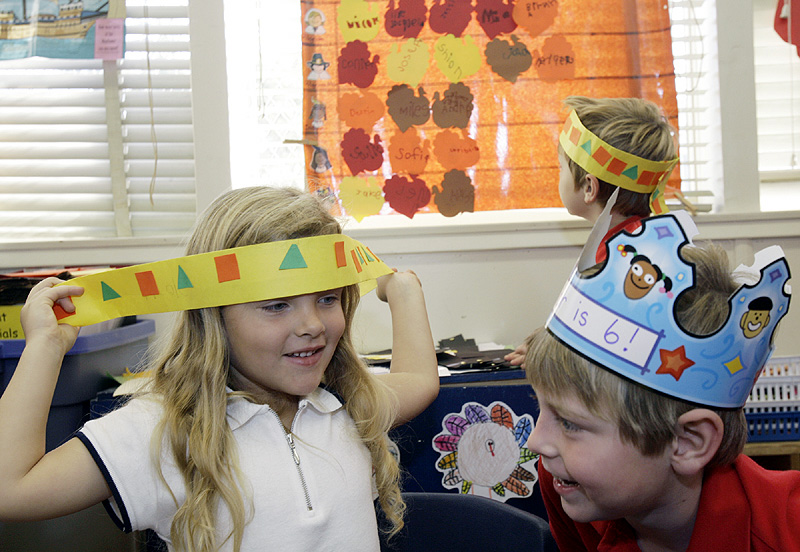 Nicole Super, 5, left, with Connor Apel, 6, right, and Andre Painter, 6, background, try on paper headbands for the annual Thanksgiving Day play put on by their kindergarten class at Kettering Elementary School in Long Beach, Calif. For years, students in this class have not been adding feathers to their American Indian headbands because they are considered sacred objects in American Indian cultures.

“If you are going to teach, you need to keep it positive,” he said. “They can learn about the truths when they grow up. Caring, sharing and giving – that is what was originally intended.”

Adam McMullin, a member of the Seminole tribe of Oklahoma and a spokesman for the National Congress of American Indians, said schoolchildren should get an accurate historical account.

“You can’t just throw an Indian costume on a child,” he said. “That stuff is not taken lightly. That’s where educators need to be very careful.”

Becky Wyatt, a teacher at Kettering Elementary School in Long Beach, decided to alter the costumes for the annual Thanksgiving play a few years ago after local Indians spoke out against students wearing feathers, which are sacred in their culture. Now children wear simple headbands.

“We have many mixed cultures in Long Beach, so we try to be sensitive,” Wyatt said. “What you teach little children is important.”

Laverne Villalobos, a member of the Omaha tribe in Nebraska who now lives in the coastal town of Pacifica near San Francisco, considers Thanksgiving a day of mourning.

She went before the school board last week and asked for a ban on Thanksgiving re-enactments and students dressing up as Indians. She also complained about November’s lunch menu that pictured a caricature of an Indian boy.

The mother of four said the traditional Thanksgiving celebrations in schools instill “a false sense of what really happened before and after the feast. It wasn’t all warm and fuzzy.”

After she complained, it was decided that pupils at her children’s school will not wear Indian costumes this year.

Morgan, a teacher for more than 35 years, said that after conducting his own research, he changed his approach to teaching about Thanksgiving. He tells teachers at his school this is a good way to nurture critical thinking, but he acknowledged not all are receptive: “It’s kind of an uphill struggle.”