New Orleans may have slipped from the front pages of newspapers, but a group of Kansas University students continues to focus on the city’s struggles.

“People have kind of forgotten about it,” KU senior Leo Mulvehill said. “But it’s still in need of help.”

Architecture students in associate professor Nils Gore’s class designed a community stage that they’ll build and transport to the city’s Seventh Ward – answering a request from residents hoping to revive the community’s spirit.

The students were at work Friday in a chilly warehouse on KU’s west campus.

“It’s not just enough to give them food and a place to stay for a little bit,” he said. “It’s more about boosting their spirits up : trying to help them get back on their feet and having them enjoy their lives again.”

The students visited New Orleans earlier this semester. They met with residents and discussed their project.

“We see incredible opportunities for our students to work with the community, to have clients, to have budgets and schedules that you just can’t get in a hypothetical project in a design studio,” said Rob Corser, assistant professor of architecture who partnered with Gore on the effort. “The students get incredible lessons. They realize that their designs need to serve important functions.” 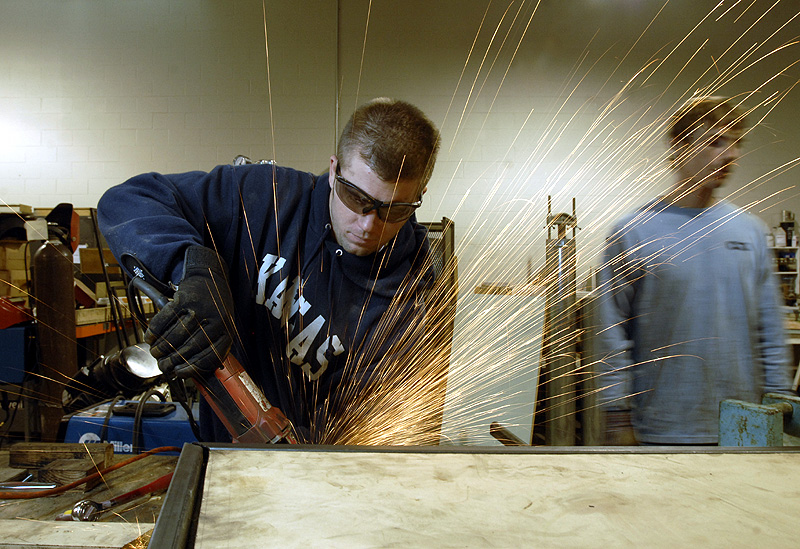 Austin Berke, Kansas University architecture student from Stilwell, grinds down a weld on a metal frame, which is part of a large collapsible community stage the class is building for the Seventh Ward in New Orleans. Students worked on the project Friday in a warehouse on KU's west campus.

A stage may seem like a superfluous gift for a city that lost so much. But that’s not so, according to New Orleans resident Dan Etheridge.

He said his community didn’t need the students to build a house.

“One house is not going to solve our problem,” he said. “We need to be thinking a lot more creatively about how to sustain neighborhood organizing.”

The KU project is the latest of many planned to assist the Seventh Ward. In the last school year, KU students designed and built community bulletin boards, a shaded structure used as a community drop-in site and a tool shed for a tool-lending library. The drop-in site and tool shed were set on an abandoned lot once filled with trash.

Residents landscaped the area and added sunflowers to clean lead out of the soil. And the residents now hope to plant herbs. They’ll call on local young people to help sell the herbs – a way to create jobs in the struggling city. 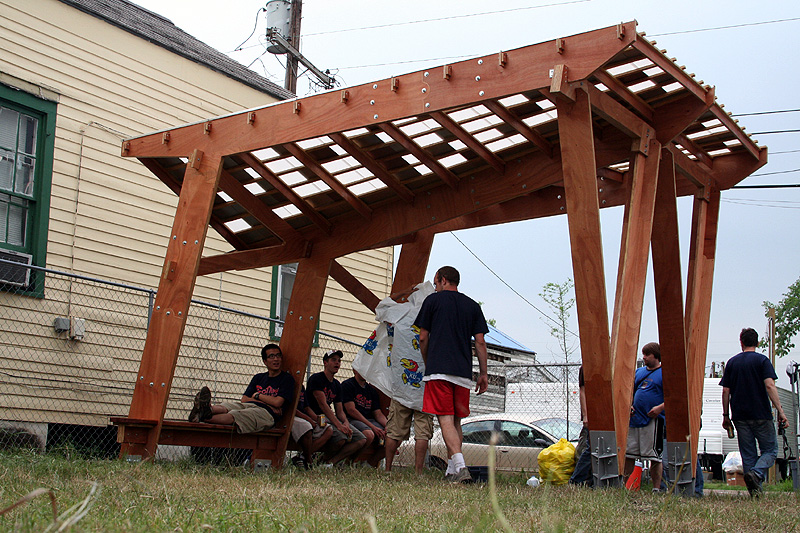 Kansas University architecture students lounge under a shade structure they built during the last school year. It is one of the early projects that KU students completed to assist New Orleans' Seventh Ward.

Organizers envision using the stage as a setting for viewing films created by local filmmakers and for youth theater projects.

Etheridge said residents have faced skyrocketing rental rates and real estate speculation. Such efforts as the stage project will show others that the community has active residents who want to be players as the neighborhood rebuilds, he said.

“It shows that we are here and we’re here to stay and we’re an important community,” he said.

The students will drive the community stage down to New Orleans once it’s completed. Construction is expected to wrap up by the end of this semester. The project costs about $5,000 and relies on donated materials and funds.

“I can’t wait to get down there and see everyone’s faces and the kids jumping on it and having a good time,” KU senior Austin Berke said. “I just hope that they’re going to have some kind of activity on the stage while we’re there.”