What Spurs a great time at poker? Tony and Eva

I was attending Game 1 of the Dallas Mavericks/San Antonio Spurs series in San Antonio. Being there with one of the minority owners, Ken Kamp, allowed me access to the owners’ lounge for a snack at halftime. While Ken and I walked back to the lounge, Tim Duncan and Tony Parker of the Spurs came rushing out of the locker room, headed back to the court. As Parker whizzed by, he threw us a quick “Hi.” That was Sunday.

On Friday of that week, Maxim’s most beautiful woman in the world, Eva Longoria, called my agent to invite me to Game 6 in Dallas – and to emcee Parker’s (her longtime boyfriend) birthday party the day afterward. I accepted, and Longoria had my son and me sitting courtside for Game 6. Wow, what a game! (The Spurs won.)

On Saturday night, Parker was surprised to see me walk into the room. But this wasn’t a birthday party so much as it was a poker tournament with deluxe surroundings. I was to emcee and play at the event. Talk about a hardcore poker party: this was a $300 buy-in no-limit Texas Hold ’em poker tournament, with re-buys, professional dealers and even a floor man – and everyone in the room was playing! The San Antonio Spurs are so into poker that they keep records for the entire year (Michael Finley, another great player, won their last tournament).

In the first hand dealt, with starting chips of $10,000, the blinds were $100-$200, and I limped in with Js-7s. With five callers, Parker raised it up $700 more, and two players called. Now I inquired about the re-buy structure, and was told that I could re-buy for just $200 more. So I thought, “I have the microphone, I’ll move all-in, and I’ll announce it. If no one calls I’ll win $2,400 uncontested. But if Parker calls, I’ll probably double him up, but that’s OK because re-buys are only $200 more. If Parker calls and I win, then I’ll have over $20,000 in chips, so I’ll be able to play super tight, and I’ll have a reputation as a loose cannon at the table, which will allow me to accumulate even more chips.” 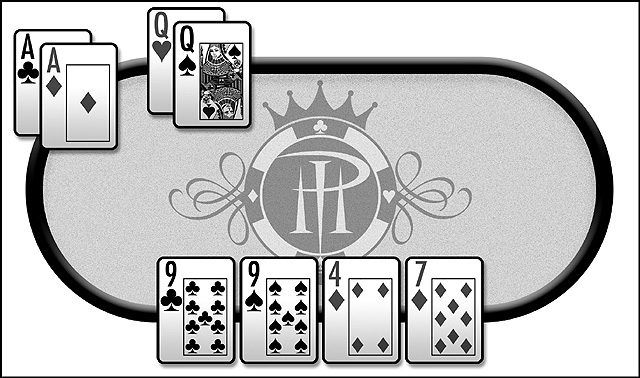 So I moved all-in, Parker called and showed A-K off suit. I was less than a 2-to-1 underdog, though not by much, but the flop was J-10-7, giving me two pair! Now I was secretly rooting for Parker to win the pot. He deserved it, because he had started with the best hand, and for Pete’s sake, it was his birthday. But then an ace came off on fourth street. Now Parker needed a 10 (two left), a queen (four left), a king (three left) or an ace (two left), so that he had 11 wins to my 33 wins (44 cards were left that we hadn’t seen yet), making him a 3-to-1 underdog. The last card was a four, and I won the pot.

After winning that pot I went on to play really tight poker while I carried around the microphone, praising and teasing Parker, Longoria, Duncan, Finley, Malik Rose, Nazr Mohammed, and a few others like Crandall Addington (Addington had finished second twice in the main event of the WSOP, once to Johnny Moss, and once to Bobby Baldwin). After the re-buys ended, and the real tournament began, Parker and Longoria each had $50,000 in chips, and I had over $60,000, but there were still more than 50 players left battling for the $10,000 first place prize.

Parker asked me if there was any way he could have avoided going broke in this hand. I said, “Of course not! But I would have raised it up more before the flop with your pocket queens, perhaps making it $15,000 to go.” Some hands you just have to lose. Given that game seven was coming up two nights later, all of the Spurs players were drinking water, and most of them left before the tournament ended at 11:20. Neither they, nor I, made the final table.

After spending an hour or two giving Parker and Longoria some private lessons the next day, I came to be impressed with them both. They struck me as admirable and solid people, definitely not stuck up or haughty as so many famous athletes and actresses are. Too bad the Spurs went on to lose Game 7!

A-K is favored over Js-7s by this much before the flop:

D) it’s an underdog when Phil holds the Js-7s!