John Helsley - Special to the Journal-World

The Jayhawks beat Missouri, 4-3, in a game that featured a bench-clearing brawl that saw players from both sides ejected and league officials huddled to sort out the ramifications.

This much is sure: KU remained unbeaten in the tournament, won its pool at 3-0 and advances to play Nebraska in the championship at 1 p.m. today.

“It’s exciting,” said KU center fielder Matt Baty, who was at the heart of the game-winning rally in the eighth inning. “I’ve been here four years, and it’s a dream come true. And we got exactly who we want. We wanted to face one of the best teams in the conference, and we got Nebraska.

“We’re looking forward to it.”

In a road rendition of the Border Showdown, bad blood spilled in the second inning when KU’s Ryne Price, rounding the bases during a home-run trot, dipped a shoulder into Missouri third baseman Brock Bond. 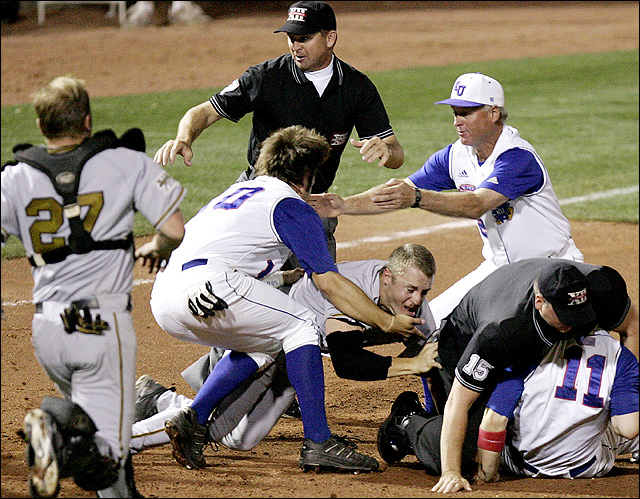 Third-base umpire Doug Williams, center rear, and home-plate umpire Chris Coskey try to get between Missouri's Brock Bond and Kansas' Ryne Price (11) during a second-inning fight that started when Price and Bond collided after Price homered. Both were ejected.

The two players locked up and soon were on the ground scuffling. Players from both schools immediately scurried to the scene from positions, the dugouts and the outfield bullpens. Fists were flying in some confrontations.

Several players had to be restrained by teammates as the two sides faced off near the Kansas dugout.

The umpires and coaches eventually cleared the field, and the two head coaches met with the umpires to discuss ejections, which were handed out to Bond and Price, the sophomore son of Jayhawks coach Ritch Price.

Big 12 officials later ruled that Price and Bond were suspended an additional game, meaning today for Price and next week for Bond, should the Tigers make the NCAA Tournament.

“I’ve never seen an incident like that when a player hits a home run,” Ritch Price said. “First off, I’d like to compliment coach (Tim) Jamieson and his team. That’s the first time we’ve ever had a problem in the four years that we’ve played.

“That Missouri-Kansas rivalry is pretty intense. Most times it’s in the stands, it doesn’t involve the teams on the field.”

Price said he thought the incident was unintentional. 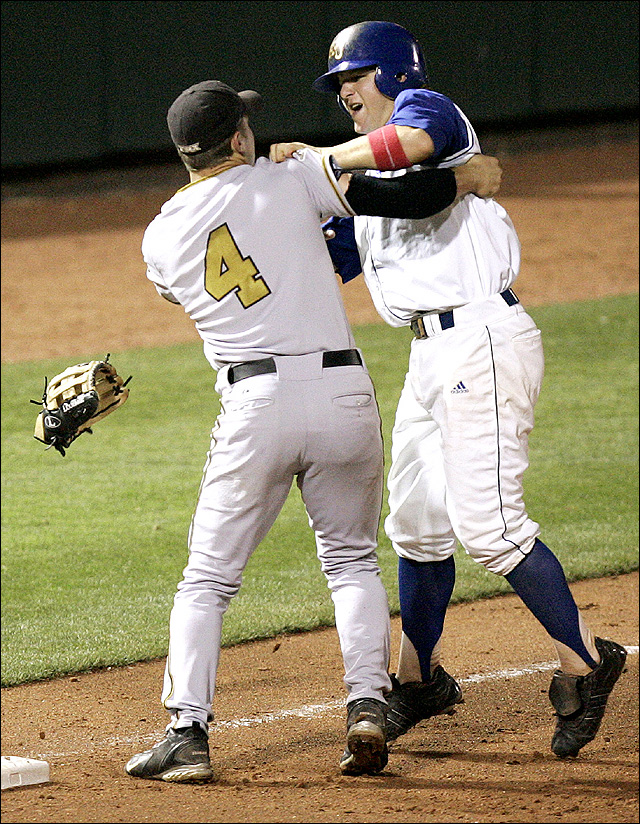 Missouri's Brock Bond, left, and Kansas' Ryne Price get in a fight after the two collided in the second inning. Both were ejected from the game Saturday in Oklahoma City.

“I honestly believe none of it was on purpose,” Price said. “Ryne is running the bases, he’s got his head down, and the third baseman just turned around and walked into him as he’s running. They collided pretty hard.

“I don’t think that either guy was intentional in what happened. I think it’s something that just unfortunately happened. He got hit pretty hard, and he responded.”

Still, Ritch Price regretted the situation and knew it could have been worse.

“My four years here, that’s the first time we’ve had the benches empty,” Price said. “I thought both teams did a really good job of controlling their emotions and not throwing punches where it could have escalated into something ugly and been an embarrassing thing for both institutions and our conference.

“On behalf of my team, I apologize. I apologize to the conference and Missouri. That’s certainly not the way we want to conduct ourselves in championship events.”

Price made it 2-0 in the second, actually rising to finish his jog to home plate, before being tossed.

Erik Morrison’s run-scoring single in the fifth made it 3-0, a score that held through six innings.

But Missouri scored twice in the seventh, when Don Czyz was called on to get the final out and escape a jam. Then the Tigers tied it off Czyz in the eighth, before the Jayhawks pushed across the decisive run in the bottom of the inning.

With runners at the corners, Baty grounded a chopper to shortstop, where Missouri’s Gary Arndt fielded the ball, then tripped and lofted a slow one-hop throw to first base, where Baty was ruled safe, allowing Preston Land to score the winning run.

Czyz, who suffered his first blown save of the season, earned the win to improve to 6-0.