Despite the title of “X-Men: The Last Stand,” the movie is essentially “X-Men 3.”

Three, as in three times as many mutants, three times less subtlety and three major characters killed off.

But since it involves the X-Men – perhaps the greatest comic book franchise of them all – it’s still about three times more interesting than the typical summer blockbuster.

“X-Men: The Last Stand” is a less intellectual, more special-effects driven effort than its predecessors, and fans of the ongoing mutant saga won’t be shocked to find that out. That’s because acclaimed filmmaker Bryan Singer (“The Usual Suspects”) left prior to filming the third entry to direct the upcoming “Superman Returns.” In his place comes Hollywood journeyman Brett Ratner, best known for the “Rush Hour” commodities.

Ratner understands how to stage episodic action sequences, but his whole enterprise lacks the emotional complexity of the other pictures. This is what happens when a hired gun does the shooting.

The plot of the flick is rather intriguing, though. It centers on the government’s discovery of a cure that can eliminate genetic mutations, which offers mutants an opportunity to willingly give up their powers and the defects that often accompany them. 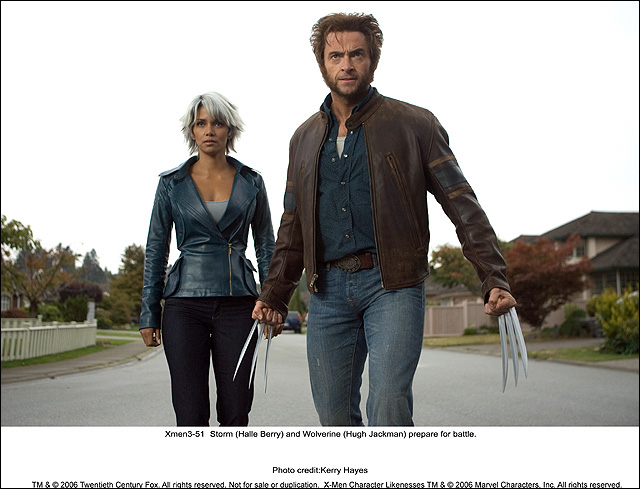 Battle lines are drawn, with some of Professor Charles Xavier’s (Patrick Stewart) X-Men tempted by the idea, and the separatist Brotherhood led by Magneto (Ian McKellen) violently opposed to it.

Meanwhile, the resurrected Jean Grey (Famke Janssen) has gained nearly unstoppable telekinetic abilities, which unleashes a split personality known as Phoenix who threatens all those concerned.

New members of the exponentially expanded cast include Kelsey Grammer as the blue-furred Beast and Ben Foster as the winged Angel.

The original “X-Men” released in 2000 proved a watershed movie, because it was the first adaptation of a popular Marvel Comics franchise to be embraced both critically and commercially. As such, it opened the floodgates for more blockbusters that courted high-profile filmmakers and huge budgets, a la “Spider-Man” and “Hulk.” It also ensured that some of the lesser characters in the Marvel pantheon (“Elektra,” anyone?) had a shot at courting multiplex audiences. (Cinematic versions of Iron Man, Ghost Rider and a Fantastic Four sequel already are in production.)

When going back and watching the original or its outstanding follow-up, “X2,” it’s surprising how few characters are utilized – only four supervillains in “X-Men” and about the same number in its sequel. The main downfall of “X-Men: The Last Stand” is also its biggest guilty pleasure: watching just how many mutant baddies they can throw on the screen. And there are dozens.

Even if one is familiar with the Marvel universe (and I’ll proudly admit to buying the first “New X-Men” issue off the rack as a 10-year-old), the amount of characters is so cumbersome that it’s impossible to process who is supposed to be who. Here’s some guy who grows pointy bones out of his flesh then hurls them as weapons. Is it Spike? Marrow? Wait, now there’s another kid who has quills that launch out of his face. Maybe he’s Spike. Or Porcupine Boy?

The same problem applies to the good guys as well. Ratner is given some juicy themes to work with, courtesy of a script by “X2” scribe Zak Penn and “Mr. and Mrs. Smith” writer Simon Kinberg. How interesting a dilemma for individuals like Rogue (Anna Paquin), who has a legitimate reason to go for the cure rather than endure a life where she can’t touch another person without draining their life force.

But these underveloped moments of depth are glossed over in favor of another fiery explosion, leaving Rogue, Angel and especially Cyclops (James Marsden) with an embarrassing lack of screen time. 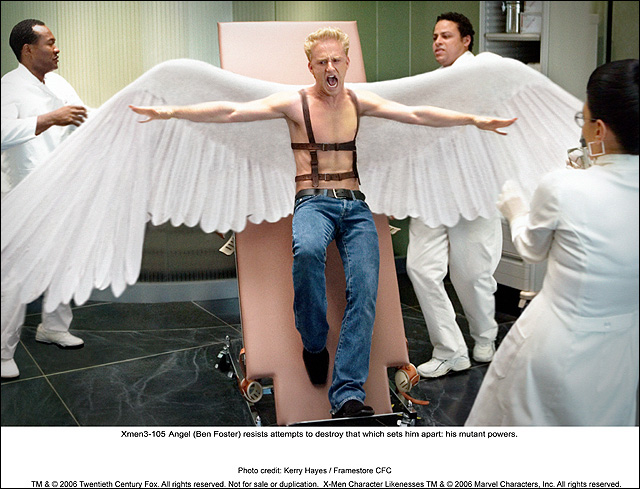 Angel (Ben Foster) resists attempts to destroy that which sets him apart: his mutant powers in X-Men:

As for the characters that do dominate the screen, well, they’re great. Hugh Jackman’s Wolverine ranks as one of the most entertainingly convincing heroes to leap from page to screen. The movie is never dull when the clawed one is in the frame.

Likewise, McKellen (the lone acting standout in “The Da Vinci Code”) brings gravitas to his role of the bitter Holocaust survivor who can mentally manipulate metal.

When one tattoed mutant asks him, “You’re so proud of being a mutant, where’s your mark?”

He replies: “I have been marked once, my dear and let me assure you, no needle shall ever touch my skin again,” as he reveals the concentration camp brand on his arm.

With performers like this involved, it’s no mystery why “X-Men: The Last Stand” manages to overcome its directorial flaws. And it’s no wonder that the solo movies “Wolverine” and “Magneto” have already been announced for 2007.