Editor’s note: Several Army Rangers who fought in World War II will have a reunion in Lawrence this June. Marsha Henry Goff’s father was a member of the Rangers during the war.

By the end of January 1945, as Allied forces advanced against Japanese positions in the Philippines, the writing was on the wall for any Japanese military leader who cared to read it.

But as American forces neared Japanese POW camps, circumstances became more dangerous for the men. That fact was demonstrated at the island of Palawan when more than 150 Allied POWs were herded into air raid shelters, doused with gasoline and burned alive by their captors to prevent them from being liberated.

Concerns grew about the welfare of 512 survivors of the Bataan Death March imprisoned in a camp at Cabanatuan in the Philippines. A daring raid by an all-volunteer force consisting of 120 members of Col. Henry A. Mucci’s 6th Ranger Battalion, a dozen Alamo Scouts and more than 200 Filipino guerrillas – led by Captains Juan Pajota and Eduardo Joson – was engineered to rescue the POWs. The camp was 29 miles behind enemy lines through rivers and across roads that carried heavy Japanese military traffic.

The intelligence capability and firepower of the Filipino guerrillas – designated to protect the Ranger force’s flanks and cover their return with the rescued POWs – and the aid and intelligence provided by Filipino civilians were essential to the success of the mission. Without a friendly civilian population, the raid would have been impossible.

Capt. Robert Prince, commander of C Company, who plans to attend the Lawrence reunion, served as the rescue plan’s architect.

“Five hundred Rangers wanted to go,” he says, “but only 100 were selected. They were absolutely thrilled to be chosen. Here was a chance to rescue some people who had been stuck since the Bataan thing, who were mistreated. : We didn’t know until later just how mistreated they were. We all felt so privileged to be selected for this mission.” 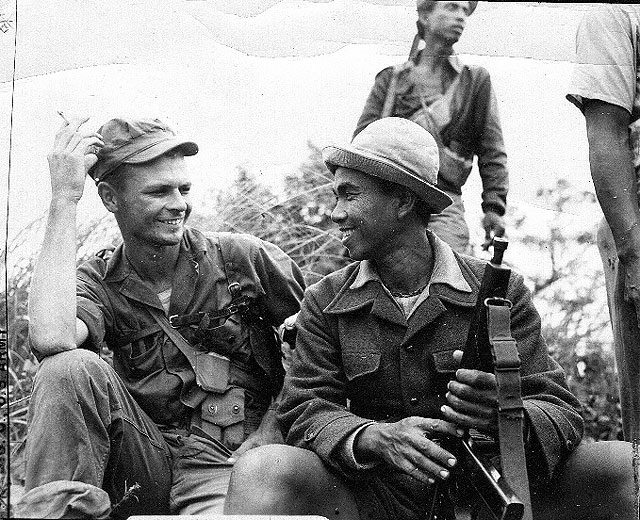 Capt. Robert Prince shares a laugh with his Filipino guerrilla guide on Jan. 31, 1945, after the successful raid to liberate 512 survivors of the Bataan Death March from Cabanatuan prison camp

Staff Sgt. Joe Youngblood, F Company, was one of the volunteers selected; he volunteered for the mission even though he doubted the outcome.

“When I learned of the raid, I just said goodbye to my wife and kid. I never thought I’d make it back,” he said.

The Ranger force embarked on its mission on Jan. 28, 1945, with plans to attack the camp after dark Jan. 29. The attack was delayed 24 hours due to heavy concentrations of Japanese troops moving through the area.

Guerrilla leader Pajota had previously observed the camp and noticed that whenever American planes flew over the area, the Japanese guards became agitated and scanned the sky long after the planes had departed. He suggested that an American P-61 – a night fighter known as the “Black Widow” – buzz the camp just before and during the time the Rangers were crawling toward it across the open ground. Ten Black Widows would later support the mission by keeping pressure on Japanese forces as the Rangers trekked back to American lines with the rescued POWs.

Prince gives a great deal of credit for the success of the raid to others: “Any success we had was due not only to our efforts but to the Alamo scouts and Air Force. The pilots (Capt. Kenneth R. Schrieber and Lt. Bonnie B. Rucks) of the plane that flew so low over the camp were incredibly brave men.”

That assessment appeared to be true. About 45 minutes before the attack, flying a plane dubbed “Hard to Get” for the voluptuous nude blonde painted on its nose, Schrieber cut the left engine at 1,500 feet over the camp. He restarted it, creating a loud backfire, and repeated the procedure twice more, losing altitude to 200 feet. Pretending to be a crippled plane, Schrieber headed toward low hills, clearing them by a mere 30 feet. To the Japanese observers, it seemed the plane had crashed and they watched, waiting for a fiery explosion. It created a much-needed diversion for the Rangers inching their way toward the camp on their bellies. 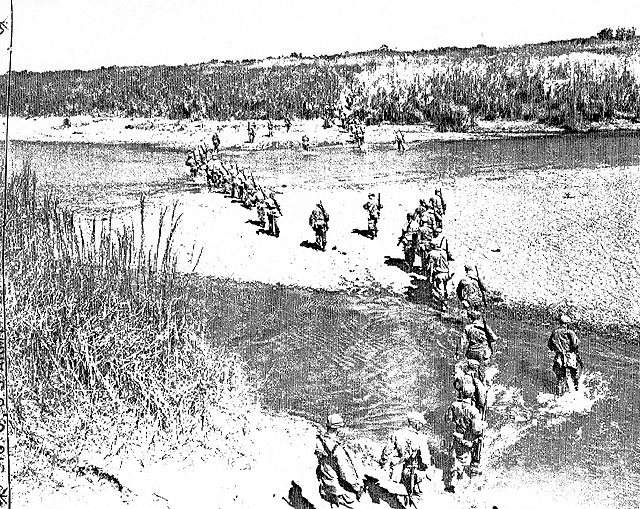 Rangers of the 6th Battalion en route to Cabanatuan prison camp to librate 512 survivors of the Bataan Death March in 1945.

Lt. John Murphy, leading the 2nd Platoon of F Company, reached the rear of the camp and fired his carbine, the signal for the attack to begin. As Murphy and his men destroyed a pillbox, cut the barbed wire fences and moved into the camp, Prince’s C Company attacked the front of the camp, trapping the Japanese guards in a devastating fire from rifles, BARs and Tommy guns. T/Sgt. John Richardson and Pfc. Leland Provencher approached the main gate. It was Richardson’s duty to shoot the lock off the gate, but, as he prepared to do so, a guard stationed in a tower shot the gun from his hand. Provencher coolly shot the guard, then handed Richardson his gun to blast the lock, thus opening the gate for the Rangers who poured into the compound.

C Company’s first platoon moved right to attack Japanese forces, while the second platoon headed left to begin moving POWs toward the main gate. The prisoners were as startled by the attack as their Japanese captors, and it took some tough talk by the Rangers to convince the POWs that they were being rescued. One POW suffered a fatal heart attack before he reached the main gate. All were seriously debilitated from abuse and starvation; many could not walk and were carried by Rangers. Youngblood remembers that he and other Rangers “took off our jackets and put rifles through the sleeves so we could carry the liberated POWs.”

When a Ranger yelled, “All American prisoners head for the main gate,” a British prisoner shouted, “We’re coming, too!”

Of the 512 POWs rescued, 490 were Americans. One grizzled U.S. Marine was said to have wrapped his arms around a Ranger’s neck and kissed him, saying, “Oh, boy! Oh, boy! Oh, boy!”

Twelve minutes into the attack, the Rangers were leading prisoners from the compound. It was at this point that the Rangers suffered their first casualties when three rounds from a Japanese light mortar wounded six men near the front gate. Mortally wounded in that attack was Capt. James Fisher, a well-liked and highly respected physician.

The Rangers’ only other fatality was Cpl. Roy Sweezy, one of the last men of F Company to leave the compound. Sweezy took two bullets in the chest as he ran toward the drainage ditch the company used to approach the camp.

Pajota’s Philippine guerrillas held off Japanese counterattacks at Cabu Creek, only a mile from the camp, killing many of the enemy and destroying their tanks. Joson, aided by a P-61 that strafed a Japanese convoy approaching on the highway from Cabanatuan City, shielded the Rangers to the west.

Prince, who made the final check of the camp to ensure all prisoners were rescued – missing an elderly British POW in a latrine who was found later that night by Filipino guerrillas – was the last man out. The camp was quiet; more than 275 Japanese lay dead within the enclosure. The most dangerous part of the retreat was where the slow column of men, a mile and a half long, had to cross the Rizal highway. Crossing an insecure highway in enemy territory was a problem compounded by the fact that the terrain did not allow the column to make a direct crossing. When the long line of men and carabao carts entered the highway, it had to march one mile south before exiting on the other side. The crossing took an hour to make and, fortunately, the vulnerable column was not detected by the Japanese.

About the time the column reached American lines, Fisher, the physician, succumbed to his wounds. He was the son of novelist Dorothy Canfield Fisher, who was born in Lawrence.

Mucci and Prince were awarded the Distinguished Service Cross for their parts in the mission. The other officers received the Silver Star, and the rest of the men received the Bronze Star.