Grave riddle one step closer to being laid to rest

Identity of bones could have legal impact

Will the bones unearthed Friday from an unmarked grave in Lawrence’s Oak Hill Cemetery solve a 127-year-old murder mystery?

After hours of digging, crews exhumed numerous bits of remains, including teeth and parts of skull and clavicle. DNA tests will now determine who was laid to rest in the grassy plot more than a century ago.

Some believe it’s John Hillmon, a ranch hand and cattle dealer who set off from Lawrence in 1879 to find his own plot of ranch land.

Others claim the grave belongs to Frederick A. Walters, a young man who reportedly had a fatal run-in with Hillmon.

The mystery spurred a controversy in its day, when it led to a lengthy court battle tried six times and argued before the U.S. Supreme Court twice.

Still, no one knows whom the grave holds.

After teaching students about the case for years, Marianne Wesson, a University of Colorado law professor, decided the mystery was too interesting to ignore. 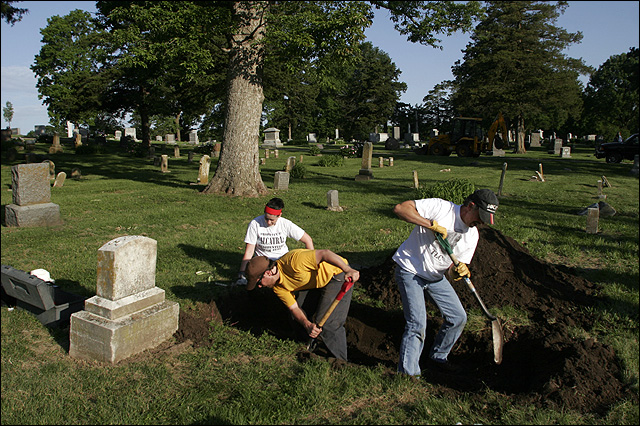 A crew digs up a grave at Oak Hill Cemetery in hopes of solving a 19th century mystery that led to a federal rule on hearsay evidence. Two Colorado professors spearheaded the dig. The exhumation crew includes, from left, Sarah Garner, Paul Sandberg and Ben Herr.

“I realized that I didn’t have the tools to settle the question,” Wesson said Friday.

She called on University of Colorado anthropology professor Dennis Van Gerven, who agreed to exhume the grave and study the remains.

The professors contacted Lawrence and received legal permission for the exhumation.

“I was intrigued by it,” former City Manager Mike Wildgen said of the professors’ project. “We wanted to cooperate.”

The professors, along with helpers and crews filming a documentary about the project, descended on the site Friday morning.

The mystery body was buried in one of the cemetery’s older areas, where plain or unmarked graves are common.

As the sun rose, the crews delved deeper and deeper into the earth, spraying dirt out beside them.

After hours, they uncovered an old nail. Then, some time later, a breakthrough. A bit of shoulder bone. More remains were unearthed from a soupy layer more than five feet below the surface.

In February 1879, Hillmon bought a $25,000 life insurance policy and set out from Lawrence on a trek west in search of ranch land. 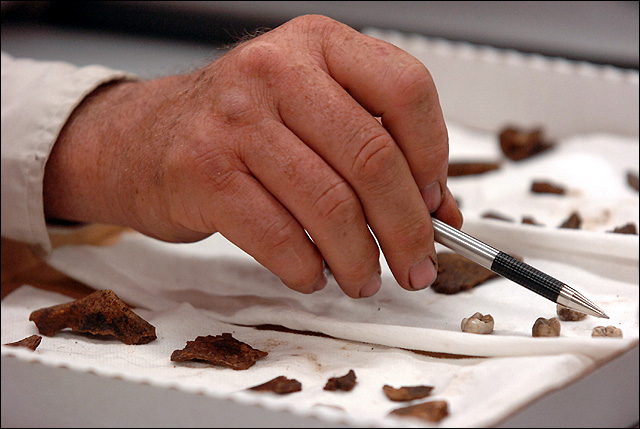 Leray Hillmon, Stevensville, Mont., sorts through bones and teeth that may have belonged to one of his ancestors, John Hillmon. Leray Hillmon will provide DNA to help identify the remains.

Not long after, Brown appeared on the doorstep of a country house and reported he’d accidentally shot Hillmon. His rifle discharged when he was unloading it from a wagon, Brown reportedly claimed.

The body was taken to the nearby town of Medicine Lodge. The verdict: death by misadventure.

But the insurance companies suspected fraud. They supposed Hillmon and Brown killed a third man to collect the money.

The victim the companies eventually pointed to was Walters, a young man in his 20s, who reportedly sent his fiancee a letter stating his plans to join Hillmon’s trek.

The case went through the courts with many tangles. Brown switched his tale to claim Hillmon guilty of murder, before switching his tale back and claiming insurance companies had pressured him. Several cases ended in hung juries.

An appeal to the U.S. Supreme Court created a new exception to the hearsay rule and permitted as evidence a letter from Walters’ fiancee stating his intentions to travel with Hillmon.

The exception is still used today.

It will be weeks before there is an answer to the riddle, the researchers said Friday.

Leray Hillmon, who lives in Montana, traveled Friday to Lawrence. He doesn’t mind the exhumation of the remains. Nor will he mind if it turns out his ancestor was a murderer out to commit insurance fraud.

The remains will be returned to the site Sunday.

“It’s nothing more than an interesting historical footnote,” he said.

But it is curious, Prater said.

“I’d be tickled to death if it was Walters’ body instead of Hillmon’s,” he said. “It would make the historical footnote all the more interesting.”

Wesson sees the solution differently. The hearsay rule exception, for statements describing the intentions of the speaker or writer, is misguided, she said.

If it turns out to be Hillmon, Wesson said she plans to lobby her fellow law scholars and hopes to start a movement persuading others to reconsider the rule and perhaps repeal it.

But, if things don’t turn out like she plans, Wesson still hopes to solve the mystery.

“I just love this story,” she said. “I’ll love it if we solve this mystery either way.”