Personalities are lost at sea in ‘Poseidon’

Nobody called “Titanic” a remake of “A Night to Remember.” So it’s rather unfair to call “Poseidon” a remake of 1972’s “The Poseidon Adventure.”

But there are none of the same characters. No self-righteous minister. No obstinate cop. No Shelley Winters coddling her swimming medal.

“Poseidon” is a perfect example of the blockbuster mentality that deems people irrelevant. The movie would motor right along even if an entirely different set of individuals was onboard. How about an ocean liner filled with partying college students? Or a ship comprising solely circus performers? Wouldn’t matter.

Hollywood – especially during the summer season – is all about a simple concept. And in this case, that means delivering the money shot of a 150-foot rogue wave capsizing a cruise ship, revealing in lengthy detail the fate of faceless passengers and crew.

Audiences in Pakistan will react to it the same way as audiences in Pennsylvania. No need to complicate it with dialogue. 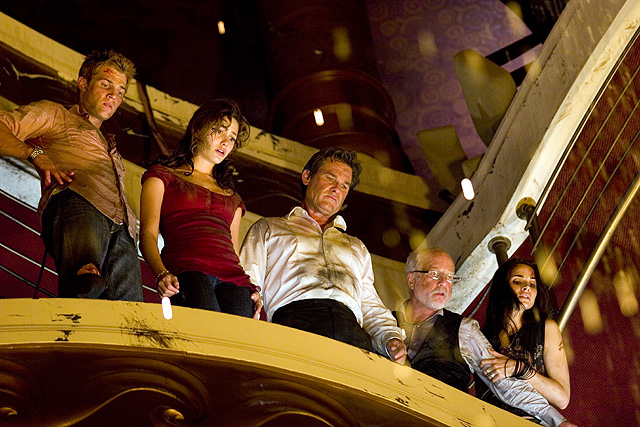 Admittedly, the studio’s decision is often justified. For one thing, that mega-dunking sequence doesn’t disappoint. The original film’s scale models seem quaint by comparison to the mighty digital manipulations utilized by “Poseidon.”

The other reason is that the conversations are so clunky in the opening act that to spend additional time learning about these individuals would have been even more irksome. (The whole film plays like boatloads of exposition were cut at the last minute in order to keep the running time to a minimum.)

Since “Poseidon” doesn’t really care about who its cardboard characters are, there’s no reason to spend any time with them, either. So here’s a quick cheat sheet:

The majority of the picture involves a group of survivors (led by Russell and Lucas) who wisely decide to try to escape the ship rather than rely on help to arrive. This forces them to climb to the top of the upside-down craft. The higher they go, the less exits there are.

Where “Poseidon” earns high marks is during the action sequences, which are really more like “tension” sequences. Director Wolfgang Peterson (“Troy”) choreographs all types of water-is-rising obstacles to hinder the troop. It’s easy to get caught up in these struggles since so many of them play on universal fears: drowning, burning, electrocution, becoming trapped in enclosed spaces.

One obstacle is conspicuously absent, however. This movie desperately needs a villain.

Kevin Dillon is introduced as a sleazy drunk with a pencil-thin mustache, but he is more of a jerk than an evildoer – and he lasts for about five minutes once things get soggy. Otherwise, there is no internal menace to thwart the good guys, just a whole lot of man vs. nature.

Even “Deep Rising” had a sneaky bad guy.

It’s easy to forget that “The Poseidon Adventure” – as hokey as it comes across in retrospect – was a Christmas prestige release, not a summer blockbuster. It went on to earn eight Oscar nominations, winning for song and a special award for visual effects.

“Poseidon” displays no presumptions of being art. It’s just a well-coordinated time passer. It’s the cinematic equivalent of a Carnival Cruise.