There’s no reason to pretend otherwise: I’m just as sick of Tom Cruise as the rest of humanity.

I don’t want to hear about any more of his escapades, his marriage, his baby, his “religion.”

So it’s rather astonishing that within the first minute of “Mission: Impossible III,” I had completely forgotten it was Cruise on the screen, and I became fully immersed in the fate of agent Ethan Hunt.

The opening scene is so remarkably compelling that it instantly announces the adventure sequel is operating on a different level than its predecessors. The sequence isn’t even action-oriented like, say, a James Bond-type espionage intro. Rather, it conjures a menacing predicament similar to something from Quentin Tarantino’s imagination, mixed with a good dose of Alfred Hitchcock’s wrong man scenario and the “Is it safe?” mantra from “Marathon Man.”

The whole enterprise is a pleasant surprise, especially considering I don’t remember much about the first two films other than they were fairly entertaining time-wasters. (It did irritate me that the 1996 original took the classic theme song and rhythmically altered it from a 5/4 fusion experiment into a 4/4 dance club remix. Yuck.) 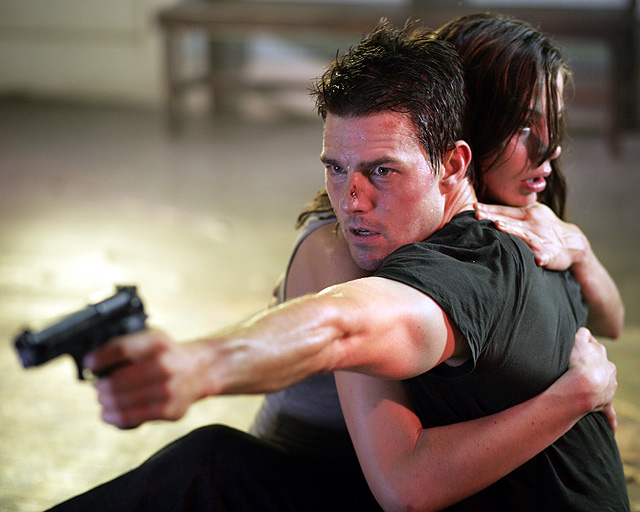 Well, the quirky time signature is reintroduced during the title sequences, and with it comes a movie that is equally off-kilter yet “catchy.”

In this third installment of the series, Hunt is no longer a field agent and has retreated to a less-hazardous life of training Impossible Missions Force recruits. The key word is “life,” as he is trying to start a new one with his fiancee Julia (Michelle Monaghan from “Kiss Kiss Bang Bang”), who has no idea about her future hubby’s real day job.

When one of Hunt’s prized pupils goes “off-grid,” he decides to assemble a team (Ving Rhames, Jonathan Rhys Meyers and Maggie Q) to retrieve her. After the operation goes south, Hunt vows to take out the villain responsible: a sadistic arms dealer played by Oscar winner Philip Seymour Hoffman.

Before long, Hunt must deal with his worst nightmare when his happy home life and clandestine career begin to intersect.

“Alias” and “Lost” creator J.J. Abrams came late to the table on this project, after David Fincher and Joe Carnahan each bailed. But the first-time feature director (and co-writer) absolutely owns the material.

Abrams stages elaborate set pieces in exotic locales – a Vatican City kidnapping, a Shanghai skyscraper heist – that move at a breakneck pace. They work so well because the gripping storyline is so easy to digest. (Remember how overcomplicated the first two pictures were?)

“M:i:III” revolves around the quintessential “MacGuffin” plot, which is the term coined by Alfred Hitchcock to describe the thing the good guys and bad guys are after that doesn’t really have to be explained. All the audience needs to know is that the thing is important and it shouldn’t fall into the wrong hands.

Admittedly, not all elements of the story are as simple to swallow. There are some real leap-of-faith issues regarding a mole within the agency. Also, I’ve never been a fan of the agency’s “mask” technology. It’s often just a cheap gimmick to manipulate the audience. At least here the process is explained in detail, complete with the inevitable quirks that go along with its application.

Otherwise, the movie is why popcorn was invented.

As for Cruise … well, there’s a reason the guy is the No. 1 box-office star in the world. “Mission: Impossible III” sure isn’t going to tarnish that stat.