Wichita ? Kansas officials are bracing for the first swarms of so-called “killer bees” to cross into the state as early as this year, the Kansas Department of Agriculture said Thursday.

Federal and state agriculture officials have been setting up traps along the state’s southern counties to detect their arrival and have notified emergency first responders. They also have prepared an informational pamphlet for the public.

“Anytime you have something that potentially can have a negative impact on what you are doing every day, you need to become aware of what you should do to keep yourself and your family safe when you are in that environment,” said Tom Sanders, coordinator of the Kansas Agriculture Department’s Cooperative Agricultural Pest Survey.

Commonly known as killer bees because their behavior is aggressive, Africanized honeybees are easily provoked. A single sting is no more dangerous or painful than a sting from any other honeybee, but Africanized bees attack in far greater numbers than more docile domestic bees. Fewer than 20 deaths have been linked to killer bees in the last 16 years, when they first arrived in Texas.

A person walking within 50 feet of a colony can trigger an attack, as can someone operating power tools or lawn equipment as far away as 100 feet from a hive, according to the Agriculture Department.

If the bees colonize in Kansas, the Agriculture Department plans to provide educational support and help the public identify them, Sanders said. A database would also be maintained so public to pinpoint areas of infestation.

Because the Africanized bees look similar to the calmer European bees now in Kansas, the Agriculture Department plans to set up a lab capable of providing the DNA analysis needed to accurately distinguish them, he said.

“It has been the experience of other states that eradication has not been effective and is not practical, so Kansas at this point does not have any plans to even attempt eradication,” Sanders said. “If you see a hive, you can kill a hive, but to think you can exclude a pest like this from this state is impractical.”

It is unknown whether the Africanized bees, which do not typically survive well in cold temperatures, would be able to survive a Kansas winter. But recent winters here have been so mild that the colonies would not have been killed, Sanders said. 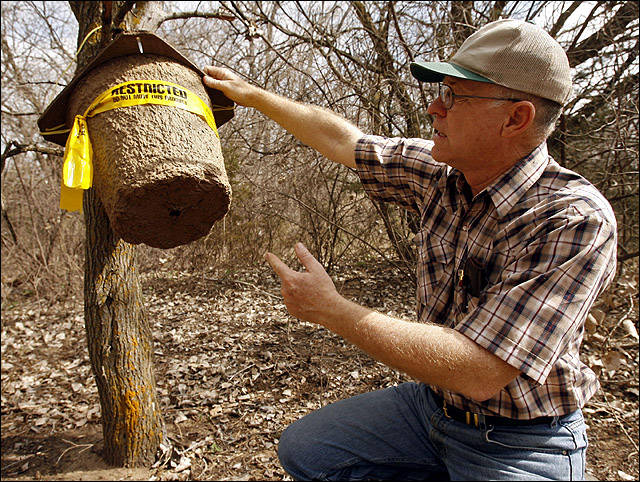 Glenn Salsbury, of the Department of Agriculture, shows how the bees enter the bottom of the trap where he has hopes of catching killer

Tim Tucker, a Niotaze beekeeper who lives just two miles north of the Oklahoma state line, said he expects to be one of the first affected when the Africanized bees arrive in Kansas.

Tucker, who is also president of the Kansas Honey Producers Association and a board member of the American Beekeeping Federation, said he does not expect the Africanized bees to dramatically affect the economics of beekeeping in the Kansas. But he noted he has friends who have left beekeeping because of it.

“It is going to cut down on a few hobbyist beekeepers, but not affect commercial beekeepers very much,” he said, noting beekeepers in areas in the country with Africanized bees have simply adapted their practices.

Tucker, who rears his own queens, said once Africanized honeybees are found in his part of the state, he will have to start buying impregnated queens or take his to northern Kansas or southern Nebraska for mating so they do not breed with the Africanized drones.

Beekeepers in other affected states also have had some success running pollen traps beneath domestic hives to keep Africanized queens from taking them over, he said.

He also said he will have to be more vigilant when he checks his own hives: “A lot of times, I just go out with a veil. I hardly ever wear gloves or a full suit with my bees because they are gentle. The mean ones I get rid of very quickly.”

The Africanized variety was bred by a researcher in Brazil who mated European bees with bees from southern Africa to try to produce a hybrid more tolerant of the tropics. The resulting queens were more aggressive and 26 were released in 1957, breeding with European bees. Swarms of the hybrid bees spread northward.

What to do if you are attacked by a swarm of bees:

¢ Run away as fast as you can. Try to get into a building or vehicle.

¢ Cover your face and head as you run, because stings to those areas pose the greatest danger.

¢ Scrape stingers from skin as soon as possible. Do not pull on them, as that can release more venom.

¢ Wash stung areas with soap and water, then apply a cold compress to lessen the pain and swelling.

¢ Seek medical help if you feel sick, if breathing is difficult, if you are having an allergic reaction or if you have been stung many times.

¢ Call 911 if the situation is life threatening.