It may not be pretty, but a Lawrence-area business hit hard by the microburst storm earlier this month is about to reopen.

Pendleton’s Country Market, which suffered about $250,000 in damage in the storm, will open its doors to the public again at 8 a.m. Saturday. Visitors should expect to see pieces of tin strewn around the fields and buildings with damage.

“The place will be very disorganized, but we’d love to see anybody who wants to come out,” co-owner Karen Pendleton said. “Just being here standing will be a celebration. … We’ve got to do this for our mental health as much as anything.”

She said there should be spinach available for picking, as long as it’s not damaged by hail before then.

The reopening is one sign that wounds from the March 12 storm are starting to heal. Another is that a well-known former Lawrence resident who was severely hurt that day has been released from the hospital and is at home recuperating.

Ted McFarlane, former director of Douglas County Ambulance Service, was cleaning up debris at his rental property in the 1200 block of Kentucky Street after the storm. A teenage driver swerved to avoid another vehicle, rear-ended a parked car and pushed it into McFarlane, causing his legs to be caught between the rear-ended car and his own parked car. 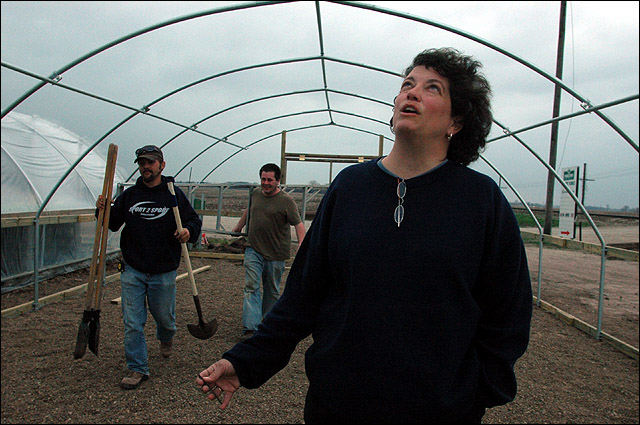 Karen Pendleton, co-owner of Pendleton's Country Market, watches one of Thursday's storms pass as Dusty Kisslinger, left, and Shawn Franklin, both Pendleton's employees, prepare for the store's reopening on Saturday.

“I heard the crash and then before I could even respond I felt the car come into my legs,” he said by telephone Thursday.

McFarlane broke the two bones below the knee in each leg and was flown by air ambulance to Overland Park Regional Medical Center. Doctors eventually put a plate in each leg, with 13 screws in one and eight in the other. He got out of the hospital about a week ago, but doctors believe it will be about six months before he is able to be back to full activity, he said.

McFarlane, 58, retired from Douglas County in 2001 to become head of Johnson County Med-Act EMS service. He said one comforting fact about the accident was that he had worked with many of the emergency responders who helped him.

“I’m just real glad that they’ve continued their emphasis on taking care of the trauma patients in the community,” he said. 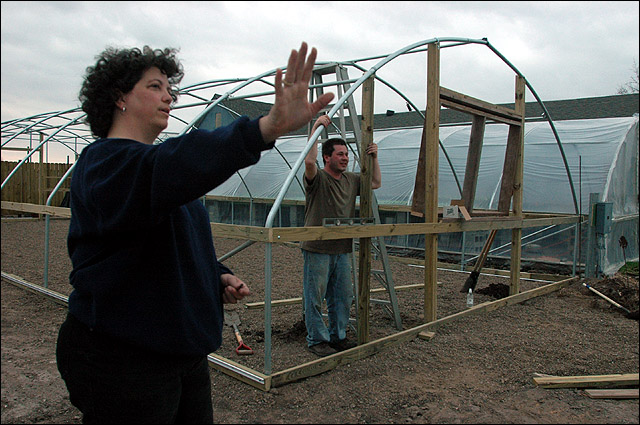 ¢ The city’s special curbside pickup of storm-related debris has ended, but people can still put debris into bundles for curbside pickup on normal trash-collection days. Bundles can’t be longer than 4 feet or weigh more than 60 pounds.

“It will take a substantial amount of time for them to make all of those repairs,” city spokeswoman Lisa Patterson said.

¢ An apartment building at Berkeley Flats complex near 11th and Indiana streets is still empty after being ordered evacuated by the city several days after the storm. Tim Pinnick, inspections supervisor for the city, said he has not yet received a permit application needed for the building to reopen.

¢ The remains of a nearly destroyed building at 720 E. Ninth St. are scheduled to be demolished either this morning or early next week. The building, owned by Harris Construction, had been used as an annex for Sun Creations, a screen-printing company.