Nashville, Tenn. ? Country radio may be ready to make nice with the Dixie Chicks.

The grudge dates back to 2003 when many country stations stopped playing the popular trio after lead singer Natalie Maines criticized President Bush.

But the Chicks’ new single, “Not Ready to Make Nice,” is now in rotation in several major markets, pushing it to No. 36 on Billboard’s country singles chart after its first full week of airplay. Other stations, however, have been slower to embrace it.

“I think a lot of people are in a wait-and-see mode,” said Wade Jessen, director of Billboard’s country charts. “The next couple of weeks are really going to tell the tale.”

Maines told a London audience on the eve of the war in Iraq that the group was “ashamed” the president was from their home state of Texas.

Back in the U.S., their music was boycotted and the Chicks said they received death threats, leading them to install metal detectors at their shows.

Maines later said she regretted the phrasing of her remark, but remained passionately against the war. 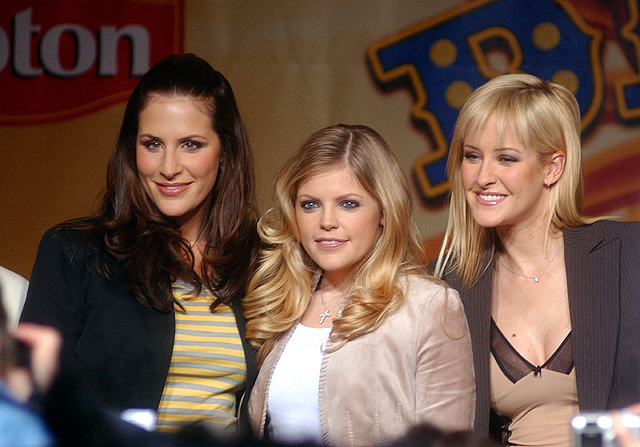 The Dixie Chicks, from left, Emily Robison, Natalie Maines and Martie Maguire pose during a 2003 news conference in New York. The trio was banned from many country stations in 2003 after Maines criticized President Bush on a London stage. But their new single, Not

In stores May 23, the new album, “Taking the Long Way,” is produced by Rick Rubin, primarily a rock and rap producer who also crafted Johnny Cash’s last albums. The record has been described as more rock-oriented, featuring musicians from the Red Hot Chili Peppers and Tom Petty’s band, the Heartbreakers.

The first single, which starts with a lone acoustic guitar and then builds in intensity, was cowritten by the trio.

She also sings, “How in the world can the words that I said send somebody so over the edge,” and “I made my bed and I sleep like a baby.”

The group declined to comment for this story, but Robison said in a statement on their Web site that “the stakes were definitely higher on that song. We knew it was special because it was so autobiographical, and we had to get it right. And once we had that song done, it freed us up to do the rest of the album without that burden.”

Jessen said the song was played at least once on 41 of the 123 country stations Billboard monitors to compile the chart, with frequent airplay in Chicago, Los Angeles, Dallas, Minneapolis and Cleveland – large markets that can strongly influence chart position.

Not all big cities are playing it, though. WIL-FM in St. Louis, which hasn’t had the Chicks in rotation since 2003, gave “Not Ready to Make Nice” a trial run and decided against adding it to the playlist after listeners complained with calls and e-mails.

“With the hard feelings out there, especially here in the heartland, combined with the in-your-face lyrics, I don’t think that boded well for them,” program director Greg Mozingo said.

KEEY in Minneapolis, which has been playing the Chicks’ music all along, took a different approach. Instead of running the song up the flagpole and eliciting listener opinion, the station quietly slipped it into rotation and has been playing it two or three times a day.

“Our thought was to do that instead of batting on the hornets nest,” said music director Travis Moon, who estimated he’s received fewer than 10 complaints. “We wanted to put the song out there on its own merits without the fanfare. If our listeners come back and hate it, we’ll take it off. If they like it, we’ll move it up in rotation.”