In a split second

When Kirk Rundstrom is well enough to write his next song, he’ll have plenty to say.

Rundstrom is probably best known as the potent frontman for the bluegrass-punk hybrid Split Lip Rayfield, a local band that has earned national fame in recent years. With his mohawk, tattooed arms and stabbing blue eyes, the musician exudes an air of defiant invincibility. That’s why it was such a shock to his fans, friends and even Rundstrom himself when he was diagnosed with esophageal cancer earlier this year.

Now, after nearly two months of chemotherapy, radiation, countless prescriptions and sky-high medical bills, the 37-year-old Rundstrom has a new outlook on life.

“If anything, it’s a big wake-up call of what’s important. What’s important is being with my kids, not playing music every single day,” Rundstrom says as his two daughters, Elle, 11, and Mollie, 7, clamor audibly in the background.

In addition to his daughters, Rundstrom has a fiancee, Lisa, countless friends and a legion of loyal fans all over the country supporting him. His friends in the music business have organized several benefit concerts. From as far north as Wisconsin to as deep south as Texas, bands are giving their time and fans are donating their money to Rundstrom’s cause.

Today, a benefit concert takes shape at The Bottleneck, 737 N.H., which will feature local artists and a silent auction with goods and services from local businesses up for bids. 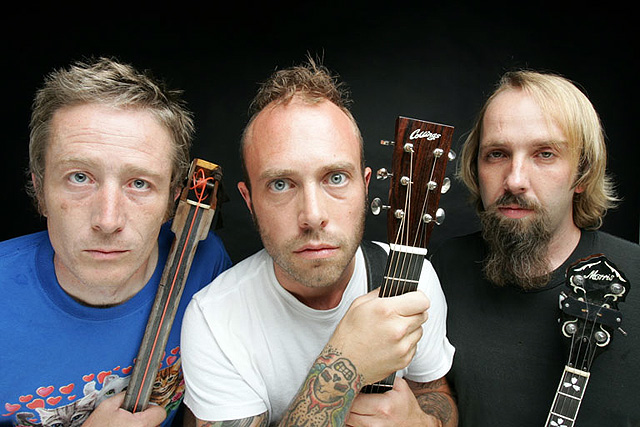 Amanda Haase, Split Lip’s manager, is the organizing force behind most of the events.

“The response was so overwhelming that I’ve been, like, swamped,” she says. “It’s great, because I’m happy to do it.”

The outpouring of support has perhaps been most surprising to Rundstrom.

Haase says that a recent benefit in Austin, Texas, netted $5,000. The band’s Web site (www.splitliprayfield.com) has raised a whopping $10,000 with a clickable donation button that allows visitors to pay via credit card. To Rundstrom, who doesn’t have health insurance and whose medical costs could reach $250,000, every penny counts.

He says other ways people can help are by buying a Split Lip CD from www.bloodshotrecords.com or a disc from his other band, Grain and Demise, from www.grainanddemise.com.

In a phone interview conducted during his last painful stretch of chemotherapy and radiation treatment, Rundstrom said he had two tubes, called PICC lines, running from a vein in each arm to his heart. Every Thursday, a bag of chemotherapy would drip into these lines and course its way through his body. On weekdays, Rundstrom would undergo two treatments of radiation that attacked a tumor in his esophagus. As he rattles off each complicated aspect of his regimen, Rundstrom seems distracted. He’s heavily medicated. Chemotherapy is at once his best friend and worst enemy.

“The chemotherapy doesn’t pick and choose. It kills everything. It’ll kill the good cells and the bad cells. What we’re gamblin’ on is that I have more good cells than I do bad cells,” he says.

After a three-month recovery period, Rundstrom will undergo invasive surgery to remove what’s left of his tumor. The surgery will navigate the tricky area under the breastbone where many vital organs intersect, which means that it’s expensive and, like a lot of surgeries, risky.

Eric Mardis, Split Lip’s banjo player, has been Rundstrom’s bandmate for more than 10 years. He remembers when, just last fall, the act opened for Dolly Parton at Golden Gate Park to a crowd of 12,000 people. He says it was one of the high points of the band’s career.

Mardis says he was “super surprised” when Rundstrom was diagnosed with cancer.

“He’s kind of been a health nut for the last couple of years,” Mardis says, “He’s been sober for over a year, then on top of that he had this insane health food regimen, and running. … He was very into that.”

Mardis is confident of a full recovery.

“He’s the kind of guy that could beat the odds on this sort of thing. He’s beat the odds with lots of stuff, like getting a hillbilly band with a gas tank bass to sustain four families,” he says. “If there’s anyone that can be stubborn enough and active enough to beat the odds on something like this, it’s definitely him.”

Rundstrom is starting a foundation for cancer awareness with Grain and Demise bandmate Calvin Bennett and Split Lip manager Amanda Haase called the Fisher Tureen Bennett Foundation. The foundation is named after each of their mothers, all of whom died from cancer. Rundstrom is already planning benefit concerts and says he wants to educate people on how to pay for intimidating medical costs.

“If you don’t have insurance, it’s not the end of the world. You just need to know there’s a lot of work you need to do,” he says.

Rundstrom’s goal is to educate himself and other people about the resources available to those diagnosed with cancer, like pamphlets at doctors offices and perhaps cheaper forms of insurance to people like musicians whose jobs don’t offer benefits.

“I know that I want to help people,” Rundstrom says.

He credits his newfound compassion for humanity to a higher power.

“The only way he can get my attention is to hit me on the head with a 2-by-4,” Rundstrom says. “Well, he got my attention.”

Humdinger of a show

In early February, Split Lip was on tour in Colorado when Rundstrom was diagnosed. Mardis says the group’s first impulse was to drive back home to Kansas so he could start treatments, but Rundstrom insisted on playing the final two shows – not because it felt like it would be his last chance, but because he just wanted to perform.

During the final concert at the Bluebird in Denver, Haase says the band played one of the best shows she’s ever heard. The performance was recorded and will soon be for sale on Split Lip’s Web site. Rundstrom says the recording is one of his proudest efforts.

“That one has some blood, sweat and tears in it, man. That’s a humdinger of a show right there,” he says.

Though Mardis agrees that the Bluebird gig was an incredible experience, he thinks the best is yet to come.

“Sometimes when you go through the hardest trials in your life, as an artist you can turn that into meaningful output,” Mardis says. “I can’t wait to hear the next batch of songs that guy writes.”

For now, Rundstrom is taking things day by day.

“I’ll play a little bit, but unfortunately my hands don’t seem to want to do what I tell them to do,” Rundstrom says. “But I’m trying. If I can sit down and focus and try to concentrate, I can almost get through a whole song.”