If the chambers of commerce from a few Southwestern states thought “National Lampoon’s Vacation” posed a deterrent to driving through their regions, they might consider issuing an injunction to prevent the release of “The Hills Have Eyes.”

The remake of Wes Craven’s 1977 flick is a bloody, excruciating and proficient entry into the horror pantheon.

If nothing else, it makes New Mexico seem more hazardous than the Persian Gulf.

It’s a question that keeps taking on added significance with each passing hour his family is stranded in the New Mexico desert.

Doug, his wife, newborn baby and four in-laws took an off-the-map detour en route from Cleveland to San Diego, and their RV and Airstream trailer are now functioning as the equivalent of circled wagons.

Actually, “stranded” isn’t quite the term to describe their situation as much as “lured, trapped and led to slaughter.” It seems nuclear testing during the post-World War II era resulted in generations of genetic mutations in the region. Banded together as a feral clan, the residents don’t take kindly to traditional Americans.

Soon the huddled suburbanites are separated and being picked off by these mutants (ironic, considering Stanford is best known for portraying the superpowered mutant Pyro in the “X-Men” franchise). Luckily, the victims have two handguns, a pair of pet German shepherds and their sheer will of determination to help protect them. 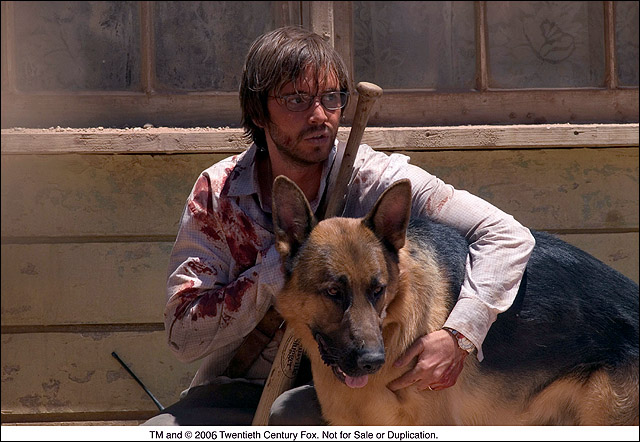 Unlike other modern filmmakers trying to exploit remakes of bygone horror flicks, French director Alexandre Aja (“High Tension”) understands that this type of movie is far more intense if it doesn’t look like an MTV video.

Aja (who also cowrote the screenplay) ensures the harrowing sequences unfold with documentary-like persistence. So visceral is the carnage and so believable are the victims’ reactions to it that it’s impossible not to get caught up in the story.

This isn’t a “Friday the 13th”-type effort where the masked killer is the star. Here, the audience actively roots for the victims. (Their heroic dog even drew applause at an advance screening.)

Like Sam Peckinpah’s “Straw Dogs,” in which meek, bespectacled Dustin Hoffman resorts to his base instincts to repel the British thugs invading his home, Stanford’s Doug becomes the vessel for the viewer to work out dormant aggression. Like Hoffman’s character, Doug is an anti-gun, glasses-wearing pacifist – and a Democrat. His ex-cop father-in-law (Ted Levine, for once NOT the killer) thinks his new kin is a major-league wussy. But then again, pop’s reckless tactics get him voted off the island early.

As the film’s tagline states: “The lucky ones die first.”

“Hills” is really only hampered by the fact it is being waged on such a familiar battleground. There are at least a dozen movies with virtually the same plot, including such recent efforts as “Wolf Creek,” “Wrong Turn” and (with a slight variation) “The Devil’s Rejects.”

Heck, Craven’s overpraised original itself was a rip-off of Tobe Hooper’s superior “The Texas Chainsaw Massacre.”

There also is a key moment in “Hills” when one of the mutants delivers a sociopolitical speech about why his clan turned against society. It’s the one part of the picture that comes across as stagey. People who are trying to kill you don’t stop to make speeches – unless you are James Bond or Spider-Man.

Fortunately, Aja understands his job is to be terrifying and convincing, not innovative.

“Hills” confirms there are only so many ways to skin a cat in the horror biz. But at the end of the day, his cat is very much skin-free.