The plot of “16 Blocks” seems vaguely familiar, like something from a ’70s flick you might flip to on late-night cable.

In fact, it’s readily comparable to Clint Eastwood’s yucky action-drama “The Gauntlet,” in which he plays a cop escorting a witness to testify in a mob trial. Like “16 Blocks,” the movie’s “big scene” finds the pair holed up in a city bus as dozens of cops riddle the vehicle with bullets.

Fortunately for modern movie-goers, “16 Blocks” is a cut above “The Gauntlet” – if for no other reason than Sondra Locke is omitted. Yet it is just as much a B-movie throwaway with A-list talent as its predecessor.

Bruce Willis stars as Jack Mosley, a burned-out detective who is assigned the task of transporting a witness named Eddie (Mos Def) from police station to courthouse. The catch is that he has “118 minutes to get a little hemorrhoid 16 blocks,” or else the jury will be dismissed.

But this stretch of Manhattan proves nearly insurmountable when a band of corrupt cops, led by Jack’s former partner Frank (David Morse), attempts to assassinate Eddie. Apparently, the career criminal witnessed something that implicates the officers, and they will stop at nothing to silence him, even if it means Jack gets caught in the crossfire. 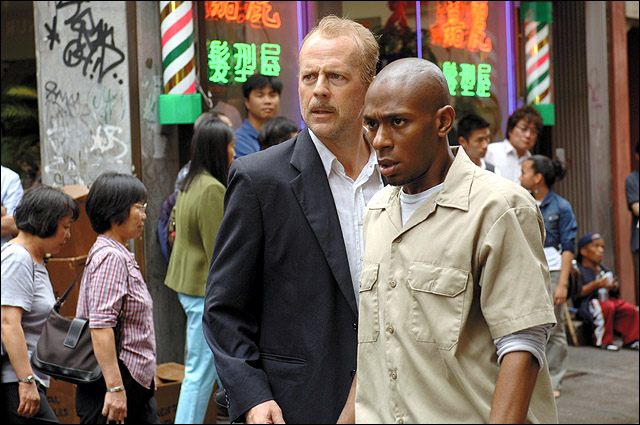 Bruce Willis, left, plays a cop assigned to escort a targeted witness (Mos Def) to the courthouse in the action drama '16 Blocks.'

Movies like this – and there are many – tend to hinge on a conspiracy that often spirals out of control. Before long, the honest-ish cop has no one left to turn to, and he is the only man left to bring down the police chief, mayor, district attorney and mafia don.

He’s like the dude on “Survivor” who doesn’t know that everyone has decided to vote him out.

“16 Blocks” keeps the cabal to a manageable number (maybe eight or 10 people are involved?), which makes the gimmicky story appear less hokey. This allows the central action to be more of a cat-and-mouse game between two limited factions, and it forces the bad cops to conceal their moves from other law enforcement types.

“Lethal Weapon” director Richard Donner is comfortable when exploring the old guy/young guy, black guy/white guy team territory as his signature series. But for an action filmmaker he’s adept at slowing things down to allow the characters to talk. This is a movie where the quieter scenes far outweigh the noisier ones. 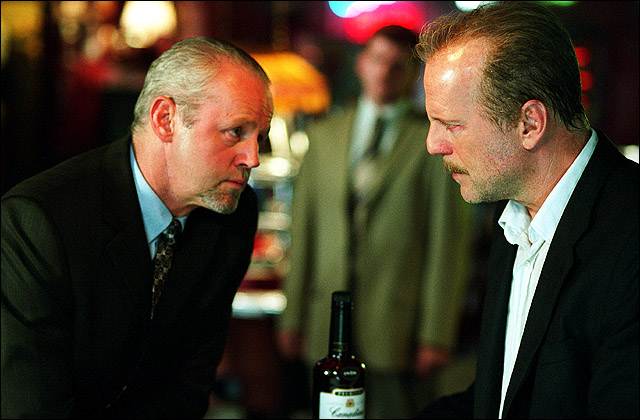 David Morse, left, attempts to convince Bruce Willis to rethink his stance on protecting a troublesome witness in '16 Blocks.'

“Life is too long, and guys like you make it longer,” Jack tells Eddie.

At first Mos Def’s Eddie is an irritating chatterbox, with a stagy accent as impenetrable as Heath Ledger’s in “Brokeback Mountain.” He also veers dangerously close to Stepin Fetchit mannerisms. Thankfully, as the film progresses, his characterization gets less affected and starts to exhibit some actual depth.

What holds “16 Blocks” together, though, is the menacing performance of Morse. The sturdy character actor has made nearly 50 movies, with notable roles in “The Green Mile” and “Dancer in the Dark.” Here, he avoids playing the rival detective as a “villain,” but more of a take-charge man who does whatever’s necessary to get the job done.

It’s also a nice touch that he and Willis’ characters don’t just throw away a long-lasting relationship based on one contentious incident. Repeatedly, Morse tries to bring back his former partner into the fold – even after gunfire has been exchanged. It’s a very long time in cinematic terms before they reach the point where there’s no turning back.

Logic begins to unravel as the film enters its third act. One doesn’t have to be a lawyer to figure out the inherent flaw in the time constraints of the plot. (So a case that is going to implicate a dozen cops can’t proceed because the jury needs to be excused?) And virtually every twist in the finale is telegraphed blocks away.

In certain respects, “16 Blocks” sounds a lot more interesting than it is. Ultimately, it’s just another cop-looking-for-redemption movie. Another mismatched buddy flick. Another loner fights the system picture. Another “Gauntlet.”