Meryl Streep may be one of Hollywood’s most revered dramatic actresses, but she is a natural born comedian.

I’ve generally preferred the more down-to-earth Streep who lets her innate charm and humor define a role. Her performances in offbeat comedies such as “Postcards from the Edge” and “Defending Your Life” – or even guest-starring on “The Simpsons” – have always seemed more impressive turns than in, say, “Out of Africa.”

Streep has scored her best comedic showcase yet in “The Devil Wears Prada.” Although the film itself is somewhat conventional, the 57-year-old actress transforms the production into a memorable affair.

While Streep is top-billed, the film is told through the eyes of Andy Sachs (Anne Hathaway), an aspiring journalism grad who moves to New York City. Unable to find a job in her field, Andy applies for a “temporary” one as the second assistant to fashion magazine editor Miranda Priestly (Streep).

Andy is told, “You work a year for her, and you can get any job you want.”

Trouble is that the infamous Priestly is absolutely terrifying. Part Leona Helmsley and part Veruca Salt, she is sadistic, demanding and takes the term “passive-aggressive” to a whole new level. 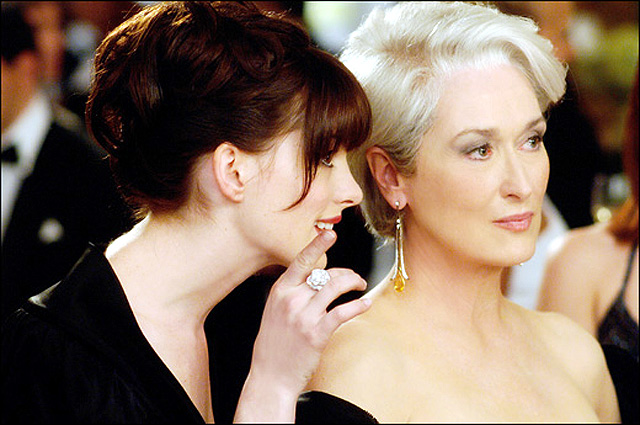 Anne Hathaway, left, plays the new assistant of a high-powered fashion magazine editor (Meryl Streep) in the comedy The

Miranda: So you don’t read Runway?

Miranda: And before today you had never heard of me?

Miranda: And you have no style or sense of fashion.

Andy: I think that depends on what your …

Miranda: No, no. That wasn’t a question.

Soon Andy begins to adjust to the glamorous, cutthroat world of style-pioneering by learning the ropes from Miranda’s bitter first assistant, Emily (Emily Blunt), and her wise art director, Nigel (Stanley Tucci), both of whom provide hilarious supporting work.

But this new lifestyle puts a strain on her relationship with her too-pretty boyfriend (Adrian Grenier of TV’s “Entourage”). And it also presents her with increasingly darker ethical dilemmas. Will she be corrupted by her exposure to the Ice Queen, or will she learn the downfall of such behavior?

“The Devil Wears Prada” is based on the novel of the same name by Lauren Weisberger, who did a stint as assistant to Vogue editor Anna “Nuclear” Wintour. The movie offers nice behind-the-scenes tidbits about the fashion world, but it’s really more of a case study in how those at the height of success can justify their cruelty.

Rating: PG-13, for some sexuality

How good a performance does Streep give?

Just look at two scenes: In the first, Andy defends why she buys cheap, comfortable clothes that aren’t designer brands. Miranda counters by explaining how Andy’s cerulean blue top is the trickle-down effect of millions of hours and dollars spent in the high-end industry. But what the woman is really doing is systematically detailing why she is smarter, classier and more motivated than those around her. Streep could have played the scene with yells or glares. But it is her very subtlety that makes the situation so insulting.

In the second example, Streep utters a throwaway line of dialogue that absolutely brings the house down. On paper it simply reads, “Why is no one ready?” But Streep’s pinpoint inflection transforms it into something as powerful as “To be or not to be.” 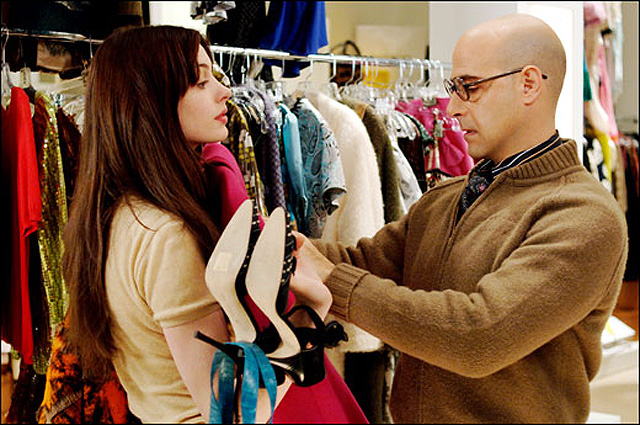 Anne Hathaway, left, plays a fashion magazine underling who gets a makeover from the publication's art director (Stanley Tucci) in the comedy The

The movie (directed by TV veteran David Frankel) eventually turns into a more formulaic morality play, with a not very awe-inspiring love triangle thrown into the mix involving Andy and a prominent writer (Simon Baker).

But it’s in this latter portion where we become privy to the depth of Miranda’s character. I was reminded of a scene in “Swimming with Sharks” – also an assistant’s tale about the world’s worst boss – in which Kevin Spacey’s blockbuster producer confesses what sent him down such an inhumane path.

There’s no moment in “The Devil Wears Prada” quite so shattering, but there is a scene where Miranda lets down her guard to discuss her failing home life. It’s handled with immense subtlety (there’s that word again), and is no less effective at conveying that this monstrous person is still a person.

Streep has never won an Academy Award for one of her lighter roles. (Of her 13 nominations, she’s only taken home the statuette twice, for the dramas “Kramer vs. Kramer” and “Sophie’s Choice.”)

Come February, it might be very fashionable to present Streep with another Oscar.