A Dodge City woman convicted of killing her baby is getting a new trial, thanks to Kansas University’s Defender Project.

The team of students and attorneys helped to reverse the second-degree murder conviction of Alma Monreal, a Dodge City woman convicted in the 2001 death of her child. She was 18 at the time.

The team brought the matter back to the courts after reviewing how Monreal’s case was originally handled.

“This is, without a doubt, the worst case we have ever seen,” Project director Jean Phillips said.

The Paul E. Wilson Defender Project aids state inmates believed to have been wronged. Students receive course credit for their work. They’ve worked on custody and divorce cases and on projects to get nonsmoking cells for inmates.

Each year, the office receives more than 200 letters from the state’s inmates requesting help.

Monreal was serving a 13-year sentence at Topeka Correctional Facility when she contacted the Defender Project.

The Defender Project would not provide details about the message. 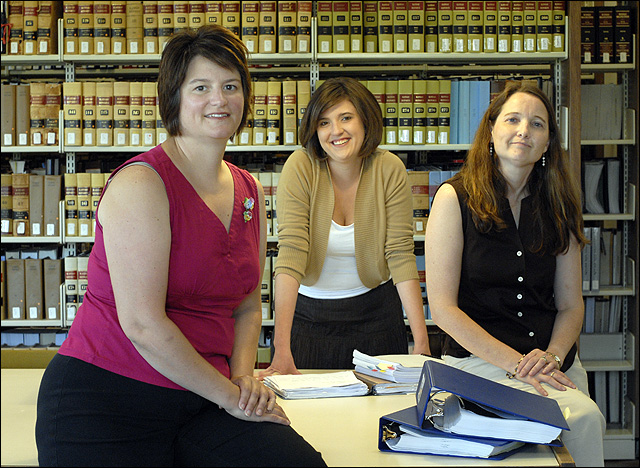 A group from the Kansas University Law School's Defender Project is coming off a victory in the case of a young woman who faced a second-degree murder charge in the death of her newborn baby. The team got the woman a retrial. On the winning team, from left, include Alice White, lead attorney, Erika Rasmussen, former student intern, and Jean Phillips, director of the Defender Project.

When Erika Rasmussen, the student intern at the time, reviewed Monreal’s case file, she saw numerous red flags, she said.

“In my humble law student opinion at that time, to me it didn’t seem like she had much of an attorney,” said Rasmussen, a recent graduate.

Rasmussen alerted supervising attorney Elizabeth Cateforis, who also identified the problems with Monreal’s case. Once the team started work on the case, Katie Gates, a student intern, tracked down experts and people to testify at the trial. She also questioned one expert on the stand.

Monreal’s first defense attorney, Barry Gunderson, could not be reached for comment.

According to Phillips, Gunderson failed his client on several counts. For example, at trial he made no opening statement, asked 11 questions and gave a closing statement of less than a minute, she said.

More about the defender project

“I can’t think of many murder trials where 11 questions would be sufficient to discharge you of your duties as defense attorney,” said Richard Ney, a Wichita lawyer who testified for the Defense Project. “There was just a myriad of things that should have been done but weren’t in this case.”

Monreal was 18 when she gave birth to a baby she had kept secret from others. She gave birth alone in the bathtub of her apartment. It’s unclear when the baby died, Phillips said.

“She kept it and would rock it,” she said. “She’d rock it before she went to work and would come home and rock it again.”

Monreal, who is not a U.S. citizen, worked at a fast-food restaurant.

“There was a lot of sort of psychological issues going on,” Phillips said. “We don’t think she understood the distinction between life and death. We also don’t think there was ever any attempt to kill this child.”

Phillips said a full psychological evaluation was never conducted at the time of the first trial. She said there were also concerns about the autopsy, police interrogation of Monreal and other areas in which she believes the defense attorney was negligent.

Monreal, who remains in Ford County Jail in Dodge City, will likely be tried again in September, though a trial date has not been set, White said.