There is a shot in “Superman Returns” – literally – that is a tour de force at conveying the powers of a superhero.

A thief pulls a pistol on Superman (Brandon Routh) at point-blank range and pulls the trigger. In slow motion, the bullet goes directly into the hero’s eye, where a close-up reveals the metal flattened like Play-Doh. A low angle view peering up at the men details the projectile falling harmlessly to the ground.

Sadly, filmmaker Bryan Singer’s new cinematic version of the Man of Steel is a lot like that gunshot: It seems perfectly on target, but it doesn’t make much of an impact.

The potential was certainly there.

Singer proved with “X-Men” and “X2” that he could manipulate one of the comic medium’s top franchises with skill and respect. “Superman Returns” is rife with Singer’s mastery of visualizing fantasy elements. Notice how finely orchestrated the sequence is where Clark Kent crash lands in Kansas – aside from the anachronistic mountains in the background, courtesy of Australia doubling for the location.

The director also concocts an engaging setup to the story (co-written with Dan Harris and Michael Dougherty). Superman has been gone for five years on a mission to explore the remains of his home world, Krypton. When he arrives back in Metropolis, he is stunned to find out reporter Lois Lane (Kate Bosworth) is living with a Daily Planet editor (James Marsden), and she has given birth to a son (Tristan Lake Leabu).

She’s also nominated for a Pulitzer Prize for her essay “Why the World Doesn’t Need Superman.” 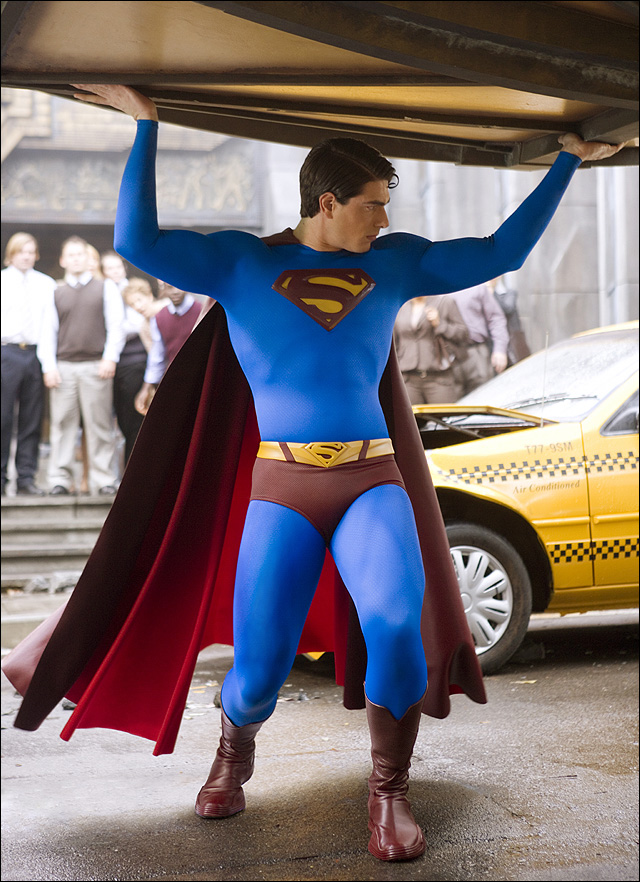 Brandon Routh plays the Man of Steel in Superman

Can his X-ray vision cut through all that tension?

Meanwhile, arch enemy Lex Luthor (Kevin Spacey) has used the appeals process to get out of prison. His first matter of business is to raid Superman’s Fortress of Solitude at the North Pole to gather technology he can use to thwart the hero, and to rearrange the geography of the world.

When a minion accuses Luthor of playing God, he disagrees: “Gods are selfish beings who fly around in little red capes and don’t share their powers.”

“Superman Returns” is at its strongest in its leisurely first half. Although thematically quite serious, there is an underlying charm to the production.

Yet by the time the third act lumbers onto the screen, it’s apparent that all the potential exhibited by Singer’s project can’t hold the viewer’s attention.

That’s because “Superman Returns” becomes overly sullen … like in a “House of Sand and Fog” way.

The world of superhero movies has turned undeniably darker since Richard Donner’s breezy “Superman” hit screens in 1978. The style has been kind to shadowy, self-doubting characters like those of “Batman Begins,” the “Spider-Man” flicks and Singer’s own two “X-Men.” However, Superman is neither shadowy nor self-doubting, so this tone doesn’t fit him at all. 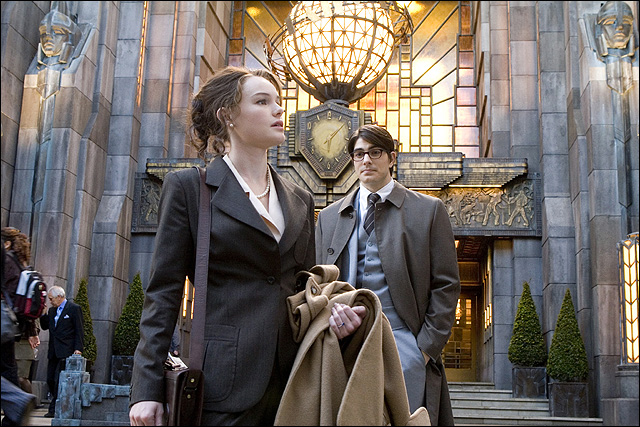 Don’t point fingers at newcomer Routh. He’s fine in the role. At times he appears to be channeling the late Christopher Reeve during the bumbling Clark Kent scenes, but as “our greatest protector,” he is convincingly heroic.

The other cast members are less inspiring.

Spacey seems to relish playing an arrogant bad guy, but he’s no more memorable than Gene Hackman’s original big-screen Luthor, or Michael Rosenbaum in TV’s “Smallville” for that matter.

Maybe Luthor is too overused a character. Sure, there aren’t a lot of choices in the Superman rogues gallery – certainly nobody to compete with those from the Batman or Spider-Man pantheon. Luthor is ultimately just a smart guy, which in comic book terms isn’t all that interesting. (Note: Kevin Smith’s unused draft of this tale featured Brainiac as the menace.)

The award for worst casting goes to Bosworth. Aside from the physical nuisance of the fair-skinned blonde trying to pass as a brunette, she’s far too young for the role. At age 23, Bosworth is playing a character who is a major daily newspaper’s lead reporter – and was so five years ago. Did she land that job while still in high school?

Perhaps the foremost problem with “Superman Returns” is the central figure himself.

Morally, he’s a goody two-shoes with no possibility of turning to “the dark side.”

Physically, he’s simply too powerful. It’s just really difficult to create a villain, a weapon or a catastrophe that Superman can’t overcome with his bulletproof eyes closed.

Singer attempts to give the lone Kryptonian some vulnerability by pining for a nearly unattainable woman. That facet is probably enough to fuel a drama or a romantic comedy. But this is a comic book tale. If the hero can’t potentially be conquered by a masked evildoer or his own internal shortcomings, how fun is that?

The answer is it’s about as fun as “Superman Returns.”