Dee Boeck is quite a runner.

Boeck, president of local club Run Lawrence, has been running competitively for close to three decades and has more age-group victories than even she probably can count.

When she tried her hand at orienteering, however, it didn’t take her long to learn that running fast wasn’t enough.

“What I found frustrating at times was, I’m a good runner,” Boeck said, “but slower people could beat me at orienteering. I wasn’t as good of a map reader. I’d take off running and realize I overshot, so I’d have to go back. A good navigator definitely has some advantage.”

Orienteering is a sport of navigation with map and compass. The object is to run to a series of points shown on the map, choosing routes that lead to the points. Traditionally, competitions take place in woods, with orienteerers plotting routes to the points – usually marked with a flag – and returning to the finish after visiting the points.

Events can be timed – the first to visit each point and return, wins – or of a set length. In the latter, competitors have a certain amount of time to collect as many points as possible and return; there is a penalty for returning beyond the set time.

Because Kansas summers typically turn woods into inhospitable settings for events such as orienteering competitions, races like Saturday’s MOP Run were invented.

The MOP Run, in its fourth year, started on the Kansas University campus and included points around the city. There were one-, two- and three-hour races. 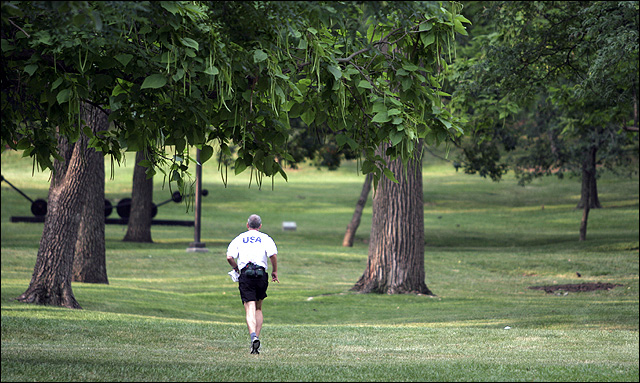 An orienteering participant begins the arduous task of uncovering dozens of mapped locations throughout Lawrence during the MOP Run. The three-hour event Saturday drew about 30 participants.

Think of it as “Orienteering Lite,” or urban orienteering.

“This event is aimed toward the runners,” said Mary Jones, who, as course-setter for this year’s MOP Run, scouted the city for appropriate control points. “It’s a three-hour event. You’re jogging nonstop for three hours around Lawrence. In the summer, that’s quite physical. But you can also do it as a family and stroll around and not be so competitive.

“But it’s not like running around, full-speed, through the woods.”

The MOP Run started three years ago. The markers were the artistic Jayhawk statues that had been placed throughout the city. Hence, the acronym MOP – Mascots On Parade.

The name stayed, even though the Jayhawks since have scattered and no longer are control points. 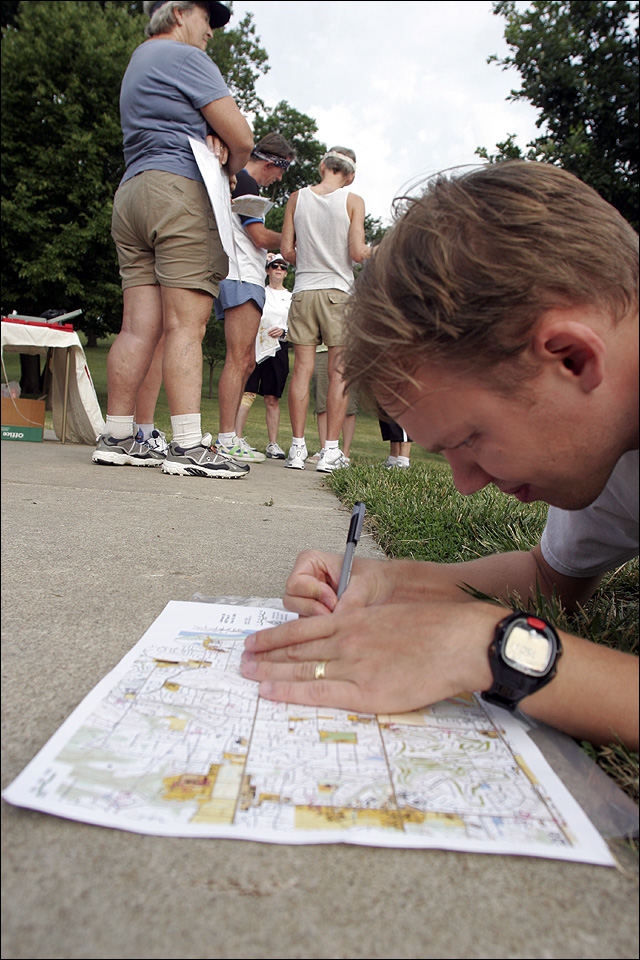 Taavi Annus, from Estonia, makes notes on his topographic map at the start of the three-hour race.

This year, the theme was Moisture On Parade, and markers had an aquatic theme – fountains, pools, birdbaths.

The 35 or so participants were provided a street map minus street names with the control points marked. Each orienteerer had to decide how many points he or she would try to visit in the allotted time and plot a course. Those farthest from the start/finish line under the carillon were worth more points than those nearby.

Then they were off, running through town and navigating on the fly.

“You have to count streets,” Boeck said. “Most urban orienteering maps have terrain features, like hills and valleys, so you do have some route choices to keep in mind. But there is no prescribed route. You go whichever way you think is best. If you’re a hill climber and the shortest way has a hill, you might take that route. Or you might be better off going around.”

Boeck, 57, handily won the women’s 45-and-over division Saturday with 62 points. Topeka’s Fritz Menninger was the top point-earner with 76 in the men’s 45 division. 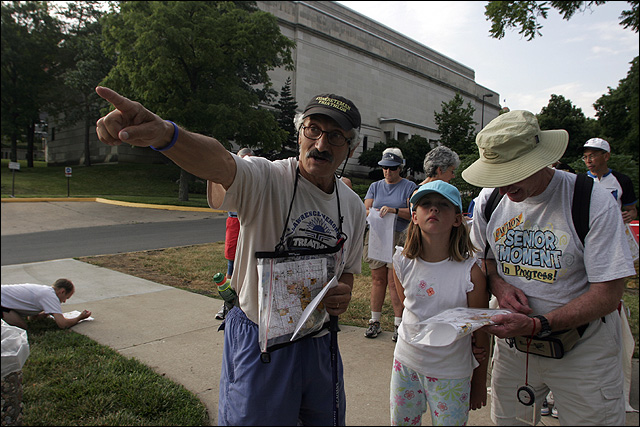 President of Orienteer Kansas despite a Missouri residence, Jones competes in about two events a month. She’s married to a two-time United States orienteering national champion.

She learned about the sport, which has its roots in the military, from her brother, who was introduced to it in his ROTC training.

Jones earned her orienteering chops with every-weekend competitions during a year spent in Ireland, and she still travels the world to compete.

Though events like the MOP Run are a far cry from true orienteering, Jones thinks they can be good for the sport.

“Most orienteering events are very competitive,” she said. “This isn’t that competitive. It isn’t the same, but it’s similar to tennis. Tennis can be anything from you hitting against the garage door to Wimbledon. Here, it’s in a city. You have to keep track of how many blocks you’ve gone, but you really aren’t going to get lost. In the woods, you can get really lost.

“This is more for runners who are interested in running, but don’t want to go into the woods. But that’s OK. We hope to draw a few more people, get people who have never heard of it interested in it.”

Her husband, Gene Wee, is director of the MOP Run and a veteran of traditional orienteering events.

Though Boeck has ventured into the woods, her map-and-compass runs now are used to supplement her run training.

She guessed she covered about 13 miles Saturday.

“What I’ve discover about it is, you do get your miles in,” she said. “You tend to run real fast, and then you stop. So it’s almost like speed training instead of just plugging along for miles. You come to a stop, then dash to the next one. Then you stop again. You cover a lot of miles without realizing it because your mind is on so many other things, like looking at the map, figuring out your course.

“I really think it would help runners. I think some might be intimidated by reading a map, but I think more runners should come out. It’s a good change.”