When it comes to cinematic sight gags, there are few images this summer that can rival Jack Black in Mexican wrestler’s gear.

Already fashion-challenged because his character is poor, pudgy and an occupant of the 1970s, Black looks simply hilarious in his red-and-blue Lycra uniform. A tight-fitting mask provides no added menace as it barely covers his prepubescent-style mustache. The whole outfit somehow makes his unsightly body look even less streamlined.

Black plays Nacho, a friar who tries to financially bolster his beloved Mexican orphanage by joining a lucha libre (loosely translated as “free-fight”) tournament. The priests look down upon the sport and those who partake in it as “false idols,” so Nacho dons a mask to conceal his identity.

He tells an orphan who accidentally catches him changing into his costume, “When you are a man, sometimes you wear stretchy pants for fun.”

Nobody in “Nacho Libre” seems to be having more fun than Black.

In his best roles (such as “The School of Rock” and “High Fidelity”) the 36-year-old actor succeeds in convincing the viewer how sincere he is about his obsession du jour. Here, he fully conveys Nacho’s passion for wrestling, Catholicism, orphans and his enchantment with the beautiful Sister EncarnaciÃ³n (Ana de la Reguera), who has just arrived at the monastery. 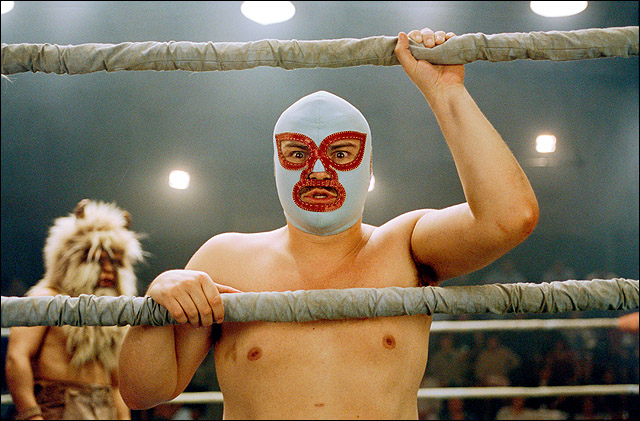 Black’s relentless energy carries this comedy a long way … and it pretty much has to. Like filmmaker Jared Hess’ previous project, the wildly overpraised “Napoleon Dynamite,” the movie is too emotionally aloof to connect with the audience. Comedically, it’s often too undisciplined to bridge the gap between setup and punch line.

Hess can be lumped in with Wes Anderson (“The Life Aquatic with Steve Zissou”) as part of that modern crop of directors who equate eccentricity with humor. He’s skilled at creating a quirky environment but then struggles with how to utilize it.

Hess and his co-writer/wife Jerusha (a native of Olathe) are better at crafting vignettes than a solid narrative. They come up with funky bits such as a match pitting Nacho and his lanky partner Esqueleto (Hector Jimenez) against two “minis” – as they are called in luchadores lingo – who behave like feral Oompa-Loompas.

What is least appealing about the Hesses is the sense that they are always laughing “at” rather than “with” their characters – who, with the exception of Penelope Cruz look-alike de la Reguera, are composed of quite possibly the homeliest cast to land a slot in multiplexes this year.

The script is still a mild improvement over “Napoleon Dynamite” because it actually builds to a climax. In this case it’s a somewhat conventional showdown between Nacho and the city’s vain superstar Ramses (WCW headliner Cesar Gonzalez).

One particular scene really typifies the overall impact of the picture.

At a crucial moment before a match, Nacho breaks into a ballad that he wrote to express his fondness for Sister EncarnaciÃ³n. But his voice doesn’t sound like that of a Mexican cook; it sounds exactly like golden-throated Jack Black in full Tenacious D mode.

A strong director – like, say, Peter Jackson of “King Kong” – would have said to Black, “No, you can’t sing.” But Hess isn’t interested in his movie making thematic sense, even though there’s already an earlier scene that shows Nacho being inept at singing. The filmmaker is merely riding his show-pony Black and hoping the actor’s abilities are strong enough to keep things interesting.

Given this info, maybe Nacho would stand a much better chance at providing for the orphans if he’d ditch the mask and audition for “American Idol.” 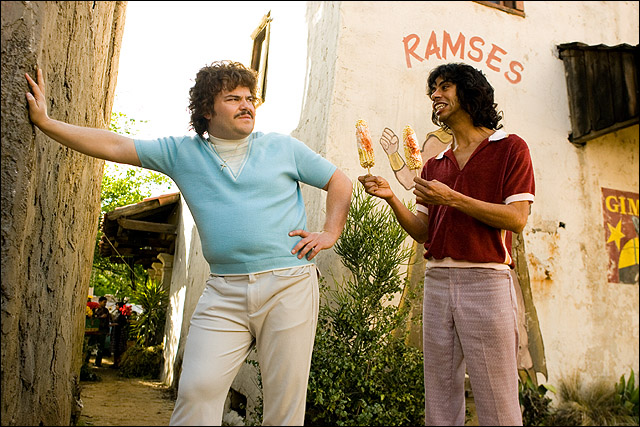 Nacho (Jack Black), left, and his partner Esqueleto (Hector Jimenez) discuss how to break into the professional wrestling ranks in the comedy Nacho