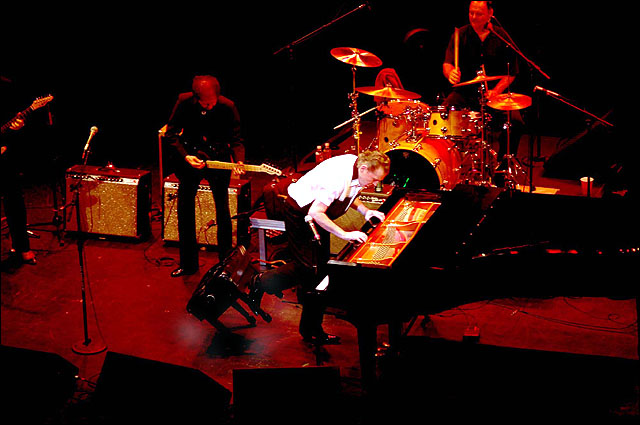 Kansas City Mo. ? Celebrated rock and Roller Jerry Lee Lewis walked slowly and stiffly onto the stage at the Folly Theater last Friday greeting his standing, applauding, whistling audience of over 1,000 with a big smile on his face and an uncharacteristic can of Sprite in his hand.

His line, “I’ll be just fine,” he said, “I’ve got my can of Sprite” brought laughter from the audience familiar with his hard drinking, wild man, “Great Balls of Fire” past.

He’s 69 and as a surprise to many, is still alive.

Seconds later he launched into “Roll Over Beethoven” and the audience, mostly way-past middle aged, was treated to his strong voice and the hard hitting piano style that is Lewis’ trademark. When he finished his appreciated version of “She Even Woke Me Up to say Good-bye,” a voice from the audience asked that the piano’s microphone be adjusted, “I can’t hear the piano,” the voice said.

As he worked his way through the 11 songs he played and sang he was backed up by two guitars, drums and bass. Many in the audience swayed in their seats to “Before the Night is Over” and “Drinkin’ Wine Spo-Dee-O-Dee”.

When Lewis finished “Don’t put No Headstone On My Grave,” he quipped, “No headstone for me,” and said, raising his arms, “I want a monument.”

He announced he’ll have a new album “Last Man Standing” coming out in September that will feature “The Killer” singing with the likes of Willie Nelson, Keith Richards, Mick Jagger, Bruce Springsteen, Eric Clapton, Little Richard and others.

Speaking of Little Richard. Whether true or not, the story goes that Lewis and Little Richard were playing on the same bill and Lewis was told that he would go first, as an opening act. Reluctantly he played his set, poured gasoline on the piano and set it afire. “There, he reportedly said, “top that.”

It appears that his days of playing the piano with one hand and one foot or banging on the piano with the seat of his pants days are over. But, he showed his cowboy boot could still kick back a piano bench and he could sing standing up while beating out a furious piano staccato that flooded the Folly with the sounds that made Lewis famous.

The Ferriday, La. native was still standing at the finish of “Great Balls of Fire.” The audience noisily appreciating his efforts, he thanked them, waved and left the stage 45 minutes after he’d arrived.

There were no boos only people pounding their hands together in hopes he’d return on stage but hopes faded when his back-up band began unplugging their instruments and waving good-bye.

Before the Kansas City, Mo. show began, Bill Shapiro, who, for 28 years has hosted “Cyprus Avenue” on Public Radio’s KCUR, shared Jerry Lee’s life story with the audience and later took questions. This show launched “Cyprus Avenue Live at the Folly,” a series the theater hopes to continue. Tickets for this show ranged from $35 to $125.