In earlier centuries, every bride was expected to have a hope chest or dower chest. Girls living before 1900 were expected to start weaving and sewing sheets, towels, tablecloths, lace, quilts and other textiles to be used when they married. Samplers were originally samples of the embroidery skill of the girls. The skill was important because every piece of fabric in the chest was monogrammed. Textiles were among the most valuable assets in the home. It took weeks to spin, weave and sew a linen or cotton sheet or towel. The wooden chests were usually decorated with carving or painting. The hope chest was kept in an important spot in the house of the new bride and was used for storage. American paint-decorated chests are important examples of early folk art. They are scarce and desirable, so prices are high. Many reproductions have been made in the past 60 years because decorators and homeowners like the look and the usefulness of the chest.

Q: I have an old icebox with plain oak panels on the outside. It has two compartments. The lower compartment, with two heavy wire shelves, opens from the front. The upper ice compartment opens from the top and has a galvanized water container connected to a valve above the front door. A removable pan at the bottom collects water as the ice melts. A brass plate on the front of the ice box reads “Knickerbocker.” What can you tell me about my icebox?

A: Oak iceboxes can sell for hundreds of dollars if they’re in excellent condition. Before electric refrigerators were common household appliances, many families used iceboxes to store perishable food. The insulated iceboxes were lined with porcelain, slate, wood, zinc or a galvanized metal. A large block of ice, delivered to the house by truck, fit into the top compartment to chill food inside the bottom compartment. Your box has the added convenience of a water dispenser. The Knickerbocker Ice Co., founded in New York in 1869, was a major conglomerate of several smaller ice companies. It was the first company to make blocks of ice for commercial sale, and its business expanded to many areas of the United States throughout the next 40 years.

Q: I picked up an oak-framed oblong mirror at a garage sale, and I wonder if you can tell me something about it. On each side of the mirror, there’s a sepia-tone print of a curly-haired child holding a bow and arrow. In one the child is asleep and in the other, awake.

A: Your pictures are known as “Cupid Awake” and “Cupid Asleep.” They picture a real little girl named Josephine Anderson. The original portraits were taken by M.B. Parkinson. The copyright was owned by a large printing company, Taber-Prang Co. of Springfield, Mass. But it was the Ohio Art Co. that made the prints popular across the country. Ohio Art of Bryan, Ohio, was founded in 1908. It began as a manufacturer of metal picture frames (today it’s best known for the Etch A Sketch). To increase sales, the company sold the frames with pictures. Among them were the cupids. Matted and mounted originals in their original frames sell for about $50 to $100 a set. 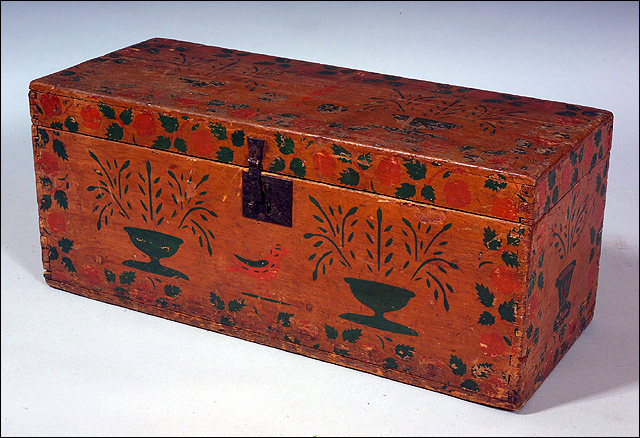 This pine chest is decorated with stenciled paint designs. The hope chest, made in the early 19th century, sold for ,055 at a Skinner auction in Boston this year.

Q: When my husband worked for RCA Service Co. in the 1950s, the company gave him a Marx toy RCA Service van. We still have the toy in its original cardboard box, which reads “RCA Television Service Truck.” The truck is light-green plastic and has black-painted wooden wheels and a red extension ladder on the top. Should I let my great-grandchildren play with it?

A: Don’t let your great-grandchildren play with the truck. Louis Marx & Co. made the toy for only a few years, from 1948 until about 1950. If your truck has all of its decals and corporate logos, which include an image of Nipper, the RCA dog, it could sell for up to $400.

Q: Our bride and groom wedding-cake toppers are 68 years old. That’s how long we’ve been married. The cake-topper dolls look like Kewpie dolls. They are about 6 inches tall and are made of celluloid with elastic-jointed arms. The groom is dressed in a black crepe-paper tuxedo, and the bride is wearing a crepe-paper-and-lace wedding gown and veil. They’re both in perfect condition. Do they have value beyond sentimental?

A: Celluloid, invented in the 1860s, was the first semisynthetic plastic. It was used to make everything from billiard balls to dolls until the use of synthetic plastics became widespread in the mid-1900s. Kewpie dolls, based on the drawings of American illustrator Rose O’Neill (1874-1944), were first made in the early 1910s. Some were celluloid. Several different celluloid brides and grooms were made in the 1920s and ’30s. A pair in excellent condition could sell for $75 to $125 or more.