‘Break-Up’ breaks down why romance fades

“They don’t write ’em like that anymore” repeated Greg Kihn in his 1981 hit “The Breakup Song.”

That observation also seems to be the prevailing sentiment when it comes to making romantic comedies.

What once was a genre characterized by witty flirtation and key misunderstandings has been hijacked by gross-out humor and illicit stalking.

So it’s refreshing to see a movie like “The Break-Up,” in which a simple romantic relationship provides the anchor for the script. It’s where all the humor, emotion and plausibility come from, and the writing rarely resorts to gimmicks to keep things compelling.

Vince Vaughn and Jennifer Aniston star in an account of what happens to a Chicago couple when they separate but are financially compelled to share the same condo.

But he’s also self-centered, addicted to watching “SportsCenter” and playing video games. And she’s high-strung, demanding and a bit of a whiner. 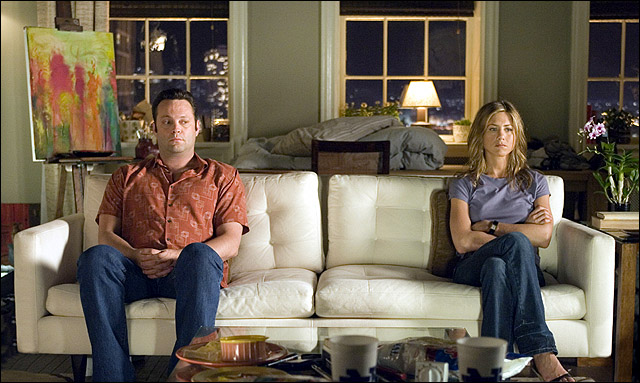 Inevitably they split and spend the rest of the movie in a duel of one-upmanship – he puts a pool table in the living room; she blasts Alanis Morissette – to try and drive the other one out.

The summary of “The Break-Up” doesn’t sound much different than an old sitcom where two characters divide up their residence by painting a line down its middle. But the meat of the plot really isn’t about these peripheral dirty tricks. It’s more an excuse to analyze what happens in a courtship when the differences start to overwhelm the similarities. It’s a breakdown of a breakup.

All of this could be terribly tedious in the wrong hands. Fortunately, the film features Vaughn (“Wedding Crashers”) in full comedic attack mode. The “oddly tall” actor, who co-wrote the story with rookies Jeremy Garelick and Jay Lavender, finds another great showcase for his particular knack at aggressive, hipster conversations that often end in arguments. 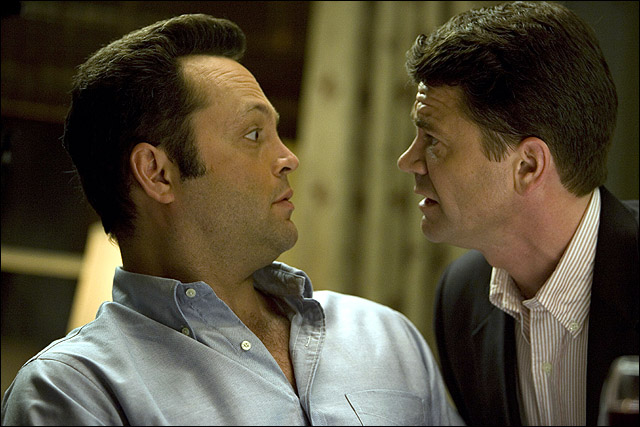 The film’s first scene occurs – inevitably – at Wrigley Field. (Will a Chicago-based flick ever feature the White Sox’s U.S. Cellular Field?) Vaughn’s character basically berates the just-spotted Aniston into dumping her “guy who tucks his shirt into his plaid shorts” to go out with him.

The rest of the exposition is taken care of during the opening credits when stills show the happy new pair moving in together and enjoying vacations, league bowling and parlor game night. Then it’s on to a hilariously uncomfortable family dinner that spells the beginning of the relationship’s end.

Like most of the dialogue in the film, it’s tough to tell what is scripted and what Vaughn is making up on the spot. This spontaneity – and believability – helps keep the very talky picture from resorting to car chases to wake up the audience i.e., “The Da Vinci Code.”

The film also features some oddball supporting roles that keep things interesting. Vincent D’Onofrio portrays one of Vaughn’s siblings in their Three Brothers Bus Tours business. (Cole Hauser is the third.) D’Onofrio crafts a character that is one of the most singularly unusual individuals to make it into a Hollywood blockbuster. The actor’s mastery of being ill-at-ease rivals Vaughn’s mastery of being slick.

Also good is John Michael Higgins (“Best in Show”) as Aniston’s closeted brother who is obsessed with his a capella singing group, The Tone Rangers. And there’s Vaughn’s long-standing “Swingers” co-star Jon Favreau as a bartender whose romantic advice teeters between being perceptive and something a hit man might suggest.

Unlike most Hollywood romantic comedies – old or new – “The Break-Up” doesn’t quite go where a viewer expects. The admirable finale indicates the picture is attempting to be a little different. Or it’s at least trying to stay anchored in the real world, where cute couples don’t always make up and walk hand-in-hand into the sunset.