Community gardens seem to be popping up all across Lawrence. Green thumbs are taking control of unused green spaces and transforming them from drab, generally weed-infested bits of land to plots that produce a bounty of healthy harvests to nourish hungry bellies.

The resurgence of community gardens is good for everyone. They create lush, hearty land in what are often crammed urban areas, leaving in their paths a space for wildlife, birds and flora to thrive. These communal gardens also help feed lower-income families, giving them the option to put nutritious and less expensive food on their dinner tables.

People who share the responsibility of tending a garden also meet neighbors and forge new friendships and gain useful skills. As the saying goes, “Teach a person to fish and they will eat for a lifetime.” The same is true of gardening.

I found four examples of these “shared gardens” in Lawrence, although there may be more.

The Lawrence Community Garden Project was established in 1994 by local muralist and community-minded activist Dave Loewenstein. Tucked away in the 900 block of Mississippi Street, it has been creating strong friendships and calloused hands for more than a decade. 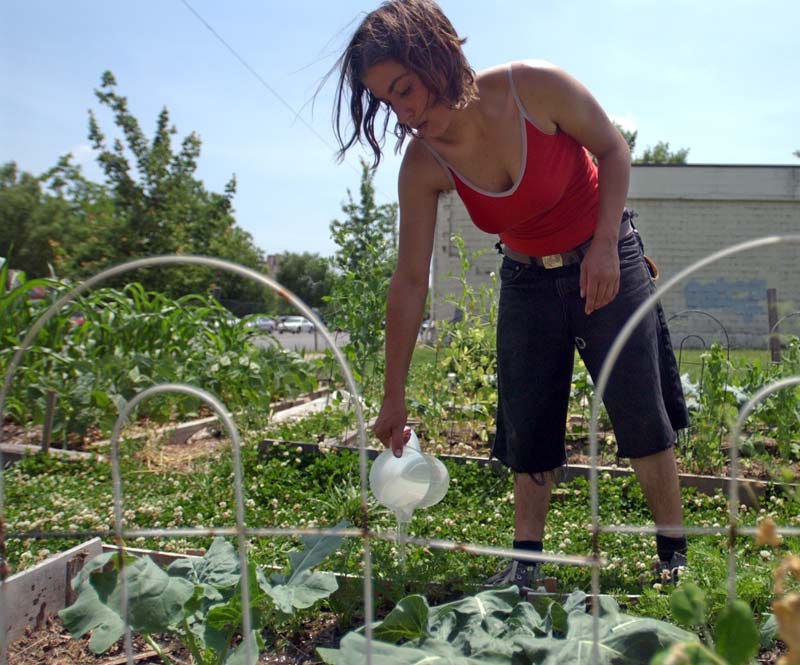 Jordan Ferrand-Sapsis waters some vegetables in the Kansas Mutual Aid Community Garden in the 800 block of Vermont Street on Saturday. The garden, started last year to provide fresh produce to its members and the community's needy, is one of at least four community plots in Lawrence that are tended by residents and provide a homegrown alternative to grocery store produce.

“It is a place where a group of people with a shared sense of community come together to create something beautiful and useful,” Loewenstein says. “With the murals, it’s a reflection of the culture, history and people of a particular place. With the garden, it’s urban green space that welcomes neighbors to grow some of their own nutritious organic food, while getting to know each other and beautifying their surroundings.”

Loewenstein had grandiose ideas of becoming a farmer when he first moved to Lawrence, but he realized that one low-income occupation was probably plenty. He had very little of his own land, so Lawrence’s first community garden was born. Loewenstein appreciates the recent spark of interest in shared gardens and is optimistic that the city’s leaders see it, too. 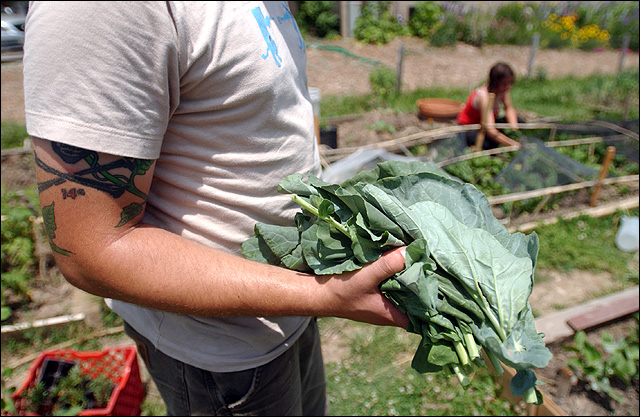 “I hope that in the future the city of Lawrence will see the benefits of community gardens and help support this grass-roots effort,” he says. “Like our public parks, community gardens can play an important role in the fabric of a dynamic community, like Lawrence, that prides itself on combining the day-to-day needs of the city with a beautiful environment in which to play and grow.”

Community gardens are filling a void for people who want to know their food is organic and where it comes from. They’re also creating meaningful work for many people, all the while crossing the boundaries of age, race and social standing. 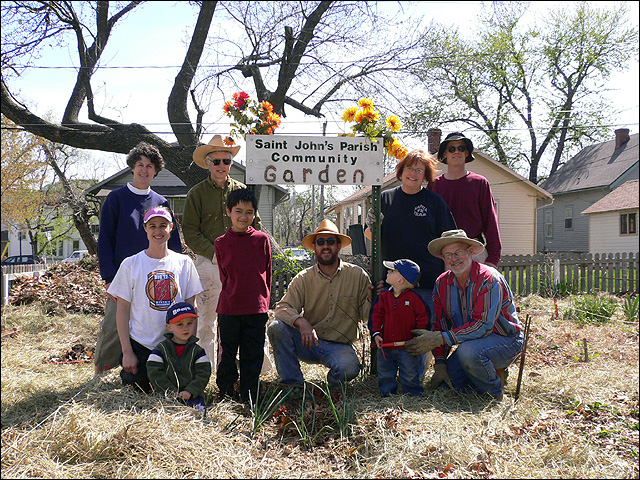 Volunteers who tend St. John's Parish Community Garden take a break for a photo during a spring clean-up session earlier this year. The garden was established in 2001.

But for Tim O’Brien, a parishioner at Saint John the Evangelist Catholic Church and co-founder of the Saint John’s Parish Community Garden, the removal of the dominion of the gas-powered mower was a catalyst in the creation of the church’s garden, which was established in 2001.

“We eliminated a large part of grass. The upkeep was too much, and we transformed it into a garden,” he says. “It’s a much more productive use of space, environmentally friendly, and I daresay much more beautiful because of the diversity of flora there and because of the friendships that have grown there.”

Power to the people

The Eastside Community Garden was established in 2003 at 903 Pa. and has been immensely popular. There is a waiting list to have a small plot in this garden because those who secure a section of the garden come back year after year to continue to cultivate the soil and create lasting memories with other like-minded East Lawrence neighbors.

The city’s newest community garden grows in the 800 block of Vermont Street. The Kansas Mutual Aid Community Garden, created in 2004, is really beginning to take shape. Jordan Ferrand-Sapsis, a member of the collective, explains some of the goals of the garden: 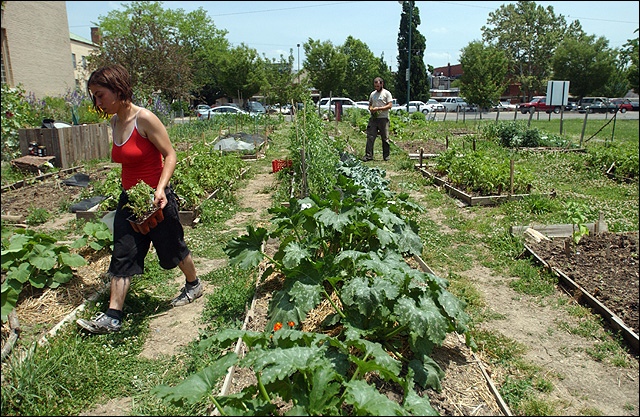 “We do not sell any of the food we grow. Access to food should not be based on how much money you have. Food is a basic right, and by charging we would be denying people that right,” she says. “The garden is all communal; there are no individual plots or beds. So what you put into the garden, you get out of it. If you want there to be a pea crop, then you should make sure those peas are watered and weeded correctly.”

The Kansas Mutual Aid Community Garden has four work days a week: 1 p.m. on Tuesdays, Thursdays and Saturdays and 10 a.m. Sundays. These are quarantined times at which people are encouraged to work and learn together.

These gardens are a serious endeavor where participants not only are feeding themselves but working together to keep hunger off of the streets of Lawrence. The four gardens have established a produce give-away and delivery system for the needy, and they often provide fresh produce to various food pantries in town.

So in a world where strip malls rule and rapid development are king, where most of the food we consume is shipped or trucked or flown to us, it’s a fine idea to take an unused piece of land and make it into a gorgeous garden to nourish the community’s spirit, add green space and put the power of what we consume and how we consume it back into the hands of the people.