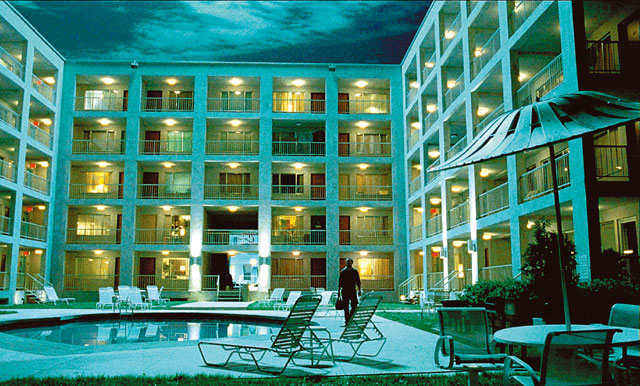 “We decide what level scariness to make: one to five. They always say five. You give them three so that they can go to bed,” Shyamalan says.

“When I told them this one, it had a kind of magic about it. This story became an epic in the house. I kept telling it, and they kept asking more and more questions about it. Then I told it again and it got deeper. When I decided to make the movie, I decided to have the main character (explained) this story the way I told it to the kids.”

The result is “Lady in the Water,” a modern fairy tale about an apartment superintendent (Paul Giamatti) who rescues a water nymph (Bryce Dallas Howard) from the building’s swimming pool. Aided by the oddball tenants of the complex, he must find a way to return the woman to her mystical home while protecting her from hostile creatures that seek to destroy her.

“When I tell stories to the kids, there’s something very dangerous about it because I don’t know what’s going to come out of my mouth and I don’t know where it’s going,” says Shyamalan, interviewed during a recent press roundtable in New York City. “You realize from telling stories so much that the god of storytelling will come down and give you the idea right when you need it.”

Not all the gods were so impressed with Shyamalan’s concept, though.

The media has been abuzz with reports of how Disney executives hated the idea, and essentially staged “an intervention” to try and talk the wunderkind Shyamalan out of it.

This entire event is captured in Michael Bamberger’s new book, “The Man Who Heard Voices: Or, How M. Night Shyamalan Risked His Career on a Fairy Tale.” Excerpts from a chapter involving a disastrous meeting with the suits at Disney was excerpted in a recent issue of Entertainment Weekly.

“It was supposed to be a book about my fifth movie at Disney. It wasn’t ever intended to be anything other than that,” the writer-director says.

“(The people at Disney) weren’t bad to me at all. They’re really good people, and we had a great time. It’s just sometimes there’s a moment to grow, step out of the house and come back,” he says.

Fortunately, Warner Bros. Pictures leapt at the chance to recruit the man responsible for two of the top 50 highest-grossing films of all time (“Signs” and “The Sixth Sense”). They stuck with his vision – no matter how bizarre it sounded – and supplied $75 million to see it accomplished.

Shyamalan (pronounced Shah-ma-lawn) views the new film as tackling the same topic as his last release, “The Village,” but from the opposite perspective.

He says, “If the world is in a crappy place, what are your two reactions? ‘The Village’ was a dark lie to protect your family. ‘Lady’ was, ‘We can make a difference. We all can have a significant influence. We all have a part and purpose.'”

Born in India to married doctors and raised in suburban Philadelphia, Shyamalan has been drawn to mystical themes ever since he was a youngster making movies with a Super-8 camera.

Now with six studio films to his credit, his name has become synonymous with brooding, otherworldly thrillers that usually feature twist endings.

“It’s a great thing and a bad thing,” he says of the Shyamalan brand. “I wonder how these movies would be seen if each and every one of them was the first movie?”

On the “great thing” side of it, the 35-year-old filmmaker admits it gives him carte blanche when it comes to casting – both from the studio and audience standpoint.

“It seems that they don’t really mind who I put in the movies as long as it’s the right actor,” he says. “They’re coming for the storytelling, which is an awesome freedom. So I can choose Tom Hanks if Tom Hanks is right. Or I can choose Paul Giamatti or William Hurt.”

Shyamalan says he wrote the lead role in “Lady in the Water” for the Oscar-nominated Giamatti (of “Sideways” and “Cinderella Man” fame).

“I thought it was a really ambitious, weird idea, and if he could pull it off it would be a really cool movie,” Giamatti recalls. 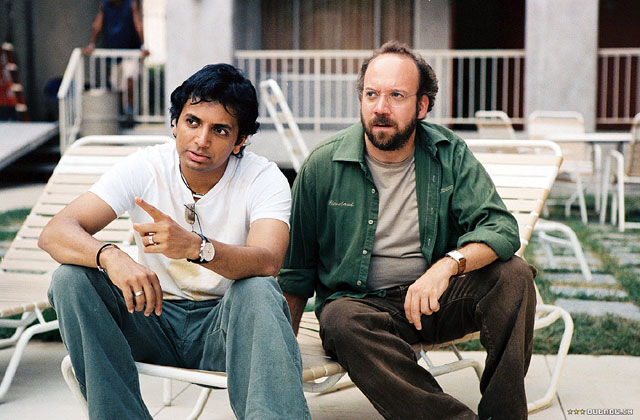 M. Night Shyamalan, left, and Paul Giamatti confer on the set of Lady

Giamatti describes his director as “smart and implacable” and was pleased with their collaboration.

“He’s very much a guy who works with actors,” the star says. “In a good way and at the right times, he’s dictatorial.”

Although making “Lady in the Water” has proved to be the most traumatic experience of his career, Shyamalan doesn’t regret any aspect of it.

“The thing that makes me tick is danger,” he says. “I have to make it very dangerous for me so that I feel threatened, everything is heightened and I’m working at a life-and-death feeling, creatively. A friend of mine said I was like Opus Dei.”

And how does this latest project rate on his one-to-five bedtime story scale?

“The movie is like three and a half,” Shyamalan says. “It was a delicate balance. As I was tweaking it I started to lose the children. As I started to ratchet it up I was like, ‘Hold back!'”