‘Lady in the Water’ steeped in maverick filmmaker’s ego

The movies of M. Night Shyamalan have always been steeped in the supernatural and otherworldly, whether they’ve explored life after death, alien invasions or superheroes.

His latest effort, “Lady in the Water,” appears to be a creepy fairy tale, but it’s really a psychological thriller. Trouble is, the psychology involves the mindset of its writer-director. The film plays like a story that might come out through dream analysis during therapy sessions, as it perfectly tells in metaphor what Shyamalan thinks of himself in terms of the cinematic universe.

On the surface, “Lady in the Water” is a fantasy about Cleveland Heep (Paul Giamatti), a sad-sack building superintendent at a Philly apartment complex called the Cove. Heep discovers a mysterious girl named Story (Bryce Dallas Howard) swimming in the common pool, and he learns she is a sea nymph known as a narf.

Here’s where it gets tricky.

The narf is being hunted by a scrunt (a word with a much different meaning outside of children’s tales), which is a werewolf-type beast with fur made of grass that “will appear as a bump in the lawn.” Cleveland enlists a whole slew of colorful characters and ethnic stereotypes among the Cove tenants to help get her back into the water so that she can be rescued by a giant eagle. 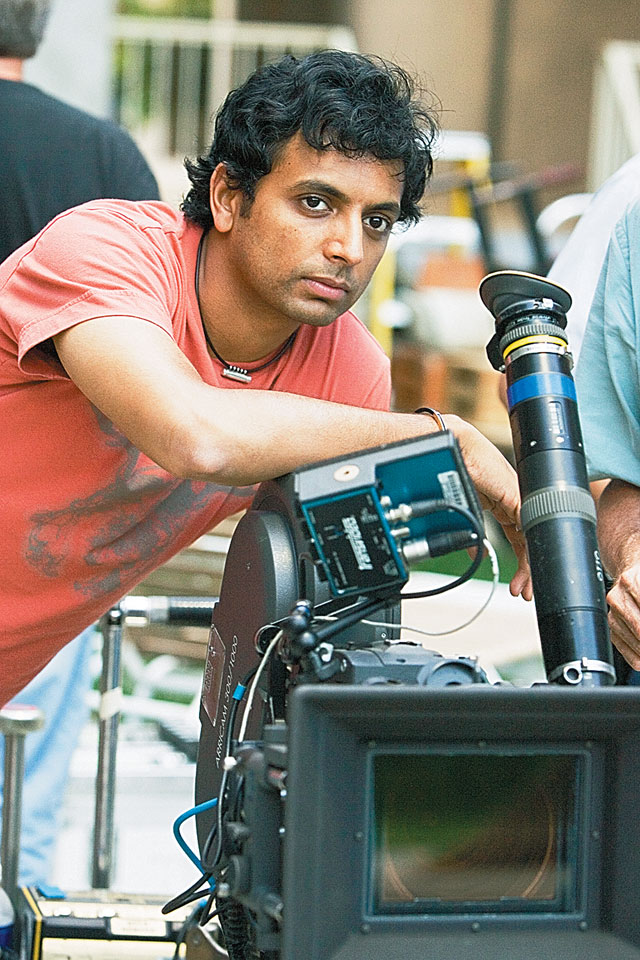 The only way they can figure out to take the hunt out of the scrunt is by collectively deciphering cryptic clues that ultimately bring unison to their disparate community.

Shyamalan first conceived “Lady in the Water” as a bedtime story told to his daughters, and then the wheels in his creative mind started turning. In addition to the plot’s origin, there are two key components that shine a light into Shyamalan’s mental state.

The first involves the fact the filmmaker inserts himself into the project as an actor. Shyamalan has always taken smaller cameos in past efforts, but here he becomes a central character. He plays Vick Ran, a self-doubting writer whose book will one day change the world for the better – according to the narf. It’s an incredibly revealing, absurd bit of casting. And it’s not helped by the fact that Shyamalan is a somewhat stiff actor, especially when surrounded by thespians such as Giamatti, Jeffrey Wright (as a crossword puzzle expert) and Bob Balaban (as a film critic).

Next to the scrunt, his critic is the main force of evil at the Cove. His know-it-all demeanor and general skepticism nearly get people killed when his advice regarding certain clues proves incorrect. This attitude also seals his own fate. It’s no secret how this fits in with Shyamalan’s psyche, considering his previous picture, “The Village,” was murdered by the press. (Think how much more thematically interesting it would be if Shyamalan had cast himself as the critic.)

What’s ironic is that this critic provides about the only source of dramatic tension in the screenplay. All the other quirky tenants get on board so easily with Cleveland’s plan and so readily embrace the idea of creatures from another dimension that the film basically becomes a group scavenger hunt.

Still, the movie is so skillfully presented, well-acted and just plain weird that it should not be so easily dismissed.

Even in his weaker films such as “The Village” and “Unbreakable,” Shyamalan establishes himself a master of atmosphere. His movies are shot with such a methodical flair that he often achieves the kind of mesmerizing quality that Stanley Kubrick perfected.

“Lady in the Water” is the type of outlandish piece that can generate endless discussion from viewers – which is always a positive trait in an industry dominated by disposable blockbusters.

It’s understandable on some level for Shyamalan’s desire to indulge stroking his own maverick ego. But it’s up to audiences to determine whether they want to pay to witness his therapy session.