After all these years, Buck’s back at bat

The grandson of a man brought to this continent a slave, O’Neil moved to Kansas City to avoid racial persecution in the Deep South. He played baseball during an era of segregation, and earlier this year was denied entry into the National Baseball Hall of Fame by a special 12-member panel.

It figures that on Tuesday night, when the 94-year-old O’Neil stepped into the batter’s box during a minor league All-Star game, nobody could quibble over an intentional walk.

Except maybe O’Neil and a few thousand fans.

“I just might take a swing at one,” he said before Tuesday night’s Northern League All-Star game.

Leading off for the West in the top of the first inning, O’Neil argued with the umpire after the first pitch from Kansas City T-Bones pitcher Jonathan Krysa sailed high and was called a ball. After another high pitch that narrowly missed his head, O’Neil took a called strike before being walked, as planned.

O’Neil ambled to first base, then took a lead off the bag as if he were going to stay in the game before being pulled for a pinch runner. 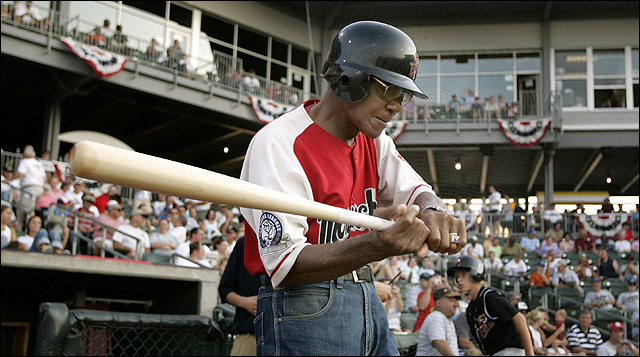 Buck O'Neil swings the bat to warm up before playing in a minor league all-star baseball game Tuesday in Kansas City, Kan. O'Neil, a former Negro Leagues player, signed a one-day contract with the T-Bones, making him the oldest professional player at 94.

After the top of the inning, T-Bones owner John Ehlert announced that a trade had been brokered to bring O’Neil to the T-Bones, allowing him to also lead off the bottom of the inning.

In his second at-bat, O’Neil took three balls – all of them high and greeted with a chorus of boos from the crowd – before swinging at a pitch and almost spinning off his feet. Possibly lost in the novelty of the inning, the umpire gave him two more balls before sending him down to first base with his second walk of the night.

The T-Bones signed O’Neil to a one-day contract, making him the oldest man ever to play professional baseball. He surpassed 83-year-old Jim Eriotes, who struck out in a minor league game in South Dakota earlier this month, by more than a decade.

“This is special, very special,” O’Neil said after his second at-bat. “I’ve been in baseball 70 years. This is how I made my living. And here I am at 94 with a bat in my hand.”

Clad in a red-and-white Kansas City Monarchs jersey, O’Neil said he thought the last time he had swung a bat in a game was in 1955.

Asked if he remembered who he was facing in that last at-bat, he replied: “I don’t remember yesterday and you ask me who the pitcher was in 1955?”

Nobody disputes that O’Neil’s involvement in the game bordered on a gimmick. But O’Neil’s supporters hope it also provides more ammunition in their quest to get him into Cooperstown.

In May, 17 people from the Negro Leagues and pre-Negro Leagues eras were voted into the Baseball Hall of Fame. On a day that was to be his crowning achievement, O’Neil quietly sat at the Negro Leagues Baseball Museum in Kansas City, Mo., and accepted that his name wasn’t called.

“It was a roller coaster for everybody except him,” said Bob Kendrick, the museum’s director of marketing. “Certainly he was disappointed. But he taught us how to handle disappointment. In the scope of things that have happened in his life, not getting into the Hall pales in comparison.”

Since the ballot was cast, the T-Bones have become the unofficial champions of Buck O’Neil.

The club has been passing petitions through the stands at all home games, asking commissioner Bud Selig or former commissioner Fay Vincent to intervene. T-Bones officials say they’ve already collected more than 10,000 signatures.

Standing in the shade at CommunityAmerica Ballpark, John Park labored Tuesday to gather signatures, already sweating through a white T-shirt that read “Sign the petition. Get Buck in the Hall.”

Across the stadium, opposite O’Neil’s name emblazoned on the outfield wall, Abbey Evert marveled that the sinewy, old right-hander was stepping to the plate on a day when temperatures in Kansas topped 100 degrees.

But O’Neil dismissed concerns about the heat.

“This is Kansas City weather,” he said. “We used to play doubleheaders in this weather with wool uniforms.”

He went on to discover Hall of Famer Lou Brock and countless others as a scout, and now works tirelessly with Kendrick to keep alive the story of the Negro leagues.

His exclusion from the Hall of Fame caught nearly everybody by surprise. Players including Hank Aaron, Ernie Banks and Brock took aim at the selection process, and Rep. Emanuel Cleaver, D-Kansas City, said the vote had left “a community in tears.”