‘Dupree’ an ode to lovable losers

Beware of guys who are only known by their last names.

It reeks of both schoolyard immaturity and anonymous superficiality.

As with Dupree in “You, Me and Dupree,” this implies the man never outgrew his party-at-all-times attitude even though he’s staring at the tail end of his 30s.

Owen Wilson plays the surnamed misfit, who is one of those charmingly enthusiastic guys everyone knows but never really takes seriously. He uses the phrase “mothership” in everyday conversation. His idea of a healthy breakfast is a stack of buffalo wings dipped in milk.

In this passable new comedy, Dupree has just performed best man duties for his buddy Carl (Matt Dillon) and wife Molly (Kate Hudson). But after Dupree once again finds himself homeless, jobless and carless, he moves in with the newlyweds for “a couple of days – a week at most.” Once there he functions like the third wheel of a scooter that is responsible for steering the other two into trouble. 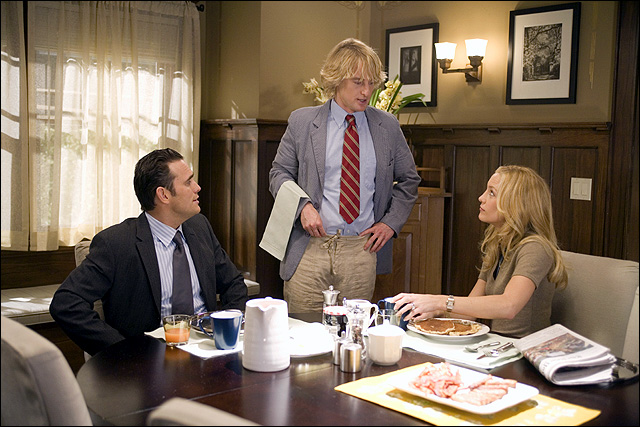 At first “You, Me and Dupree” seems like it’s going to follow the one-joke premise of the old “Saturday Night Live” sketch “The Thing That Wouldn’t Leave.” (In that memorable bit, John Belushi plays a slob who comes over to watch television with a couple and won’t take the hint to go home. The whole skit is shot like the trailer to a horror movie.)

“You, Me and Dupree” admirably splinters in directions away from this simple setup. Some involve Carl’s relationship to his father-in-law/boss (Michael Douglas), a greedy real-estate developer who does what he can to passive-aggressively undermine the couple’s marriage.

As Carl takes on more responsibility at work – which leads to the in-joke of him slicking his hair back like Douglas’ corporate tycoon from “Wall Street” – he becomes more serious. All the sudden, he’s no fun anymore, and Molly starts to crave hanging out with someone more free-spirited … like Dupree. 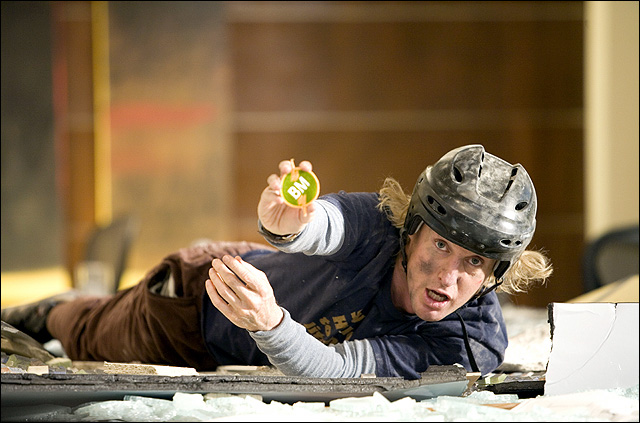 Dupree (Owen Wilson) comes to the rescue in the comedy You,

The “annoying friend movie” is hardly a new concept. But “You, Me and Dupree” delivers just enough laughs to overcome its sitcom demeanor. Despite rather flat direction from brothers Anthony and Joe Russo (“Welcome to Collinwood”), the film picks up momentum as the mayhem escalates.

Much of this is due to the performance by Wilson, a master of the kind of offbeat, infectious charisma that probably could allow him to coast through life like Dupree. As he proved in last summer’s hit “Wedding Crashers,” the shaggy-haired, bent-nosed Wilson is so earnest in his conviction that he can sell any scheme, despite it going against another person’s better judgment.

So when schoolteacher Molly decides to set Dupree up with her Mormon librarian friend, it seems like a good idea – even though he generally prefers “young, foreign, non-librarian types.”

It’s no surprise that the date ends poorly after Molly interrupts the pair in mid-coitus on her living room floor, or when that situation worsens to include a raging house fire.

Sadly, it’s not really a surprise to the audience, either. The script by rookie Mike LeSieur has its share of amusing gags, but it sure feels familiar.

Perhaps that’s because there are oodles of better movies that feature an ingratiating wacko whose presence ultimately teaches the hero life lessons. (“Planes, Trains & Automobiles,” “HouseSitter,” “What About Bob?”)

Or maybe it’s because so much of Wilson’s shtick has been witnessed in his previous pictures; “Starsky & Hutch,” “Wedding Crashers,” “Behind Enemy Lines,” “The Haunting,” even his voiceover in “Cars” offer him essentially the same role.

Is it fair to blame a comedic actor for sticking with what works? Maybe not.

Yet Wilson’s routine that provides the fundamental strength of “You, Me and Dupree” is also what ensures it will be forgotten by next weekend. It simply fades into the actor’s growing resume of watchable but unremarkable comedies.

Here’s hoping the talented Wilson won’t get stuck in a Dupree-like loop of arrested development.