Not everyone believes imitation is the sincerest form of flattery.

In fact, Doug Holiday – an owner of Lawrence’s Bigg’s Bar & Grill, 2429 Iowa – is learning in no uncertain terms that the folks at the large multinational restaurant chain Chick-fil-A don’t think much of it at all.

Holiday received a letter from the company’s law firm asking him to “cease and forever desist” using an advertising campaign that plays off Chick-fil-A’s popular spots: a cow carrying a sign that reads, “Eat Mor Chikin.”

Holiday had put his own spin on the marketing gimmick by hiring employees of his barbecue restaurant to dress in a chicken suit and carry a sign that read, “Eat Mor Pork, the other white meat.”

“I don’t think it is totally fair,” said Holiday, who used the promotion as a way to draw attention to his restaurant that sits a good distance off South Iowa Street.

Officials with Atlanta-based Chick-fil-A declined comment on the matter, but their letter made it clear they believed Holiday was unfairly trying to tap into the success of their multimillion-dollar advertising campaign, which is protected by federal trademarks. 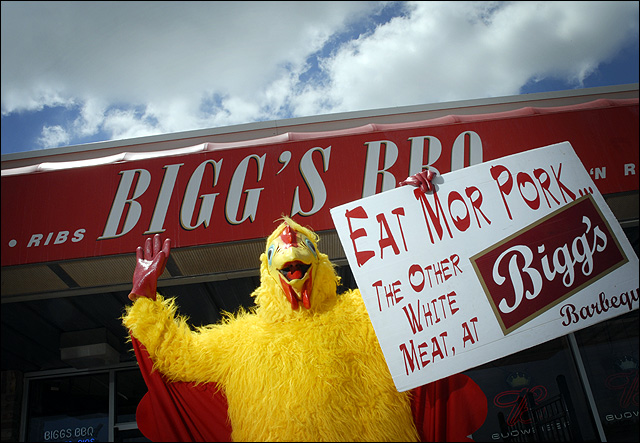 Warren Elliott, A Kansas University junior from Salina, displays a marketing costume and sign that soon will be retired from Bigg's Bar & Grill, 2429 Iowa. The days are numbered for the promotion, which the bar's owner had used for the past year, playing off a Chick-fil-A ad.

The letter said Holiday was attempting to “play off of and benefit from the extraordinary fame and goodwill” of the campaign in an effort to cause confusion and “dilute the distinctiveness” of advertising by Chick-fil-A, which operates a restaurant on the Kansas University campus.

Holiday admits the Chick-fil-A commercials were his inspiration for hiring the chicken mascot, which he sometimes employed as much as 20 hours per week.

“I guess we are playing off their fame, but I don’t think anybody in Lawrence is going to confuse a little barbecue restaurant with Chick-fil-A,” Holiday said. “We’re pretty smart people here in Lawrence.”

So is Holiday gearing up to go toe to toe – or perhaps beak to beak – with the chicken conglomerate? Are the feathers set to fly?

“Nah, that’s a pretty big corporation,” Holiday said. “I think they may have a few dollars behind them.”

That means, under terms of the letter, Holiday has until Saturday to put his advertising eggs in a different basket.

All that’s left now, Holiday said, is to figure out what to do with the chicken suit.

“I might frame it and hang it on the wall with the cease and desist order,” Holiday said.

More about the ads