Queen Latifah is like a grown-up version of one of those kids in high school who was good at everything.

It’s easy to envision her as the lead in the school play, a soloist in the choir, the center on the basketball team and the homecoming queen.

The Oscar-nominated actress (“Chicago”) puts many of these dramatic, comedic and musical skills on display in “Last Holiday,” a crowd-pleasing romantic comedy that benefits greatly from her appealing presence.

On the surface, the film appears to be one of those conventional empowering efforts where the heroine “only learns to enjoy life once she thinks she is dying.” Actually, it IS one of those movies. But somehow the conviction that Latifah brings to the project makes some of the film’s dopier choices easier to forgive.

In “Last Holiday,” Latifah plays Georgia Byrd, a New Orleans woman who works in the cookware section of a retail giant.

A churchgoing, coupon-cutting, wannabe chef, Georgia has become something of a fuddy-duddy as the years have passed. She keeps a scrapbook titled “Possibilities” that features snapshots of all the things she wants to do with her life but never got around to attempting. In it are generic wedding photos where she has pasted the heads of herself and dreamy coworker Sean (LL Cool J) onto the bride and groom.

When a work-related accident sends Georgia to the doctor, some routine tests reveal she has a rare and terminal disease. Informed that she is not covered under the company’s medical plan, she also is told the only cure is out of her price range. 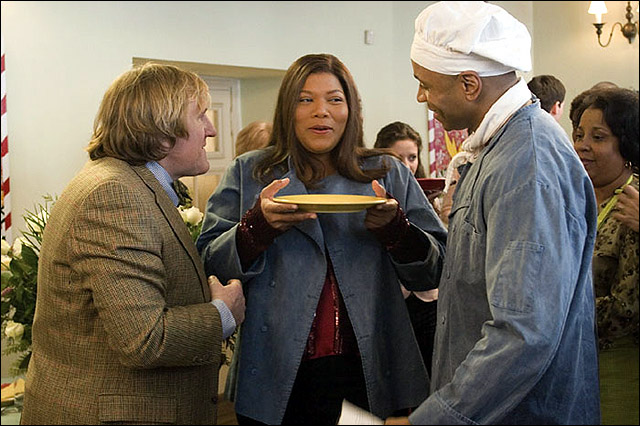 The callous HMO provider explains to her, “The cost is around $350,000. That’s without anesthesia. You’ll want that.”

Given the bleak prospects, she decides to drain her bank account and spend like there’s no tomorrow on a trip to the Czech Republic, where one of her favorite celebrity chefs (Gerard Depardieu) is in residence at a five-star hotel.

While there, a series of misunderstandings convinces everyone that she is a rich person of great daring and influence. And maybe she really is.

There’s no denying “Last Holiday” – a remake of the 1950 Alec Guinness feature of the same title – comes across as quaint by today’s standards. This is not just because it was shot in a pre-obliterated New Orleans, where the city is still defined by its culture and cuisine instead of its FEMA woes.

It’s just unusual to see a flick that is both believably honest in its depiction of a working-class character and so lightweight that it could pass for a CBS sitcom.

Part of this is due to the mostly subtle handling by director Wayne Wang. The Chinese filmmaker once considered among indie cinema’s most cutting-edge imports – based on work such as “Slam Dance” and “Smoke” – has recently been relegated to multiplex pap such as “Maid in Manhattan.” While “Last Holiday” doesn’t live up to his early promise, it reveals he still knows how to extract compelling performances from his cast (which also includes Alicia Witt, Jane Adams and Timothy Hutton as a corporate honcho and motivational author who is the piece’s main villain).

Only when Wang and company turn to outright slapstick does the movie take a detour to Cheeseville. A high-speed snowboarding romp is particularly ill-fitting and tasteless, as is an “Animal House”-style coda that reveals absurd futures for the cast members.

Isn’t it interesting, though, how underground hip-hop artists such as Latifah and Cool J have gradually turned into ultra-mainstream performers?

Does this mean 50 Cent, Eminem and Foxy Brown will be gracing the screen in romantic comedies during the next decade? If so, it’s hard to picture them making the transition as effortlessly as Queen Latifah.