Corinne Brinkerhoff was your basic intern. Young. Green. Adept at copying and filing, but not called upon to do much else at her company.

But she didn’t mind. The important thing for the 1998 Lawrence High School graduate was being at this company.

So she spent the fall of 2003 hustling and making herself as useful as possible. Her efforts paid off with an offer to become the boss’s personal assistant.

Even if his name means nothing to you, you know Kelley’s work. He’s the creator of hits like “Doogie Howser, M.D.,” “Picket Fences,” “Chicago Hope,” “The Practice,” “Ally McBeal” and “Boston Public.” His most recent series, “Boston Legal,” follows the sometimes serious, sometimes humorous escapades of Boston law firm Crane, Poole & Schmidt, led by the star power of James Spader, Candice Bergen and William Shatner.

As a graduate of Boston University’s master’s program in television, Brinkerhoff counts Kelley among her idols.

That’s why it meant so much to her when – after being promoted to development manager for Kelley’s Los Angeles production company and telling her boss that her dream was to write – he deemed the first script she’d ever attempted good enough for an episode of “Boston Legal.”

“I just was really looking for any sort of feedback from David at all. But for him to say not only do I think it’s good but I think we could use it on the show was just beyond what I would have expected,” says the 26-year-old Brinkerhoff.

“It’s not the typical path for somebody at my level. It just doesn’t happen like that.” 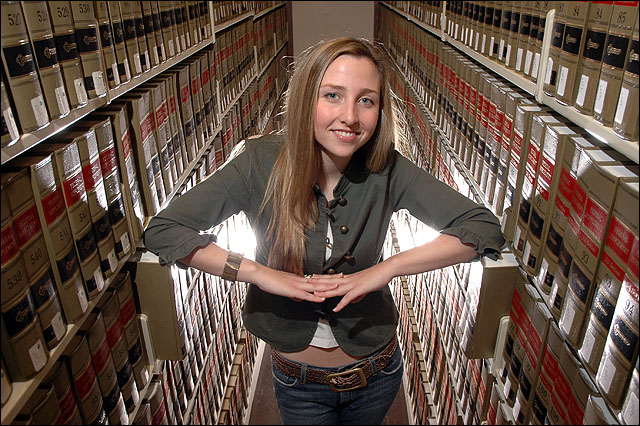 Brinkerhoff’s early success doesn’t surprise Joy Clumsky, a recently retired creative writing teacher who had Brinkerhoff in class at LHS. She recalls Brinkerhoff being one of her first published writers at the school.

“I told Corinne that one year I had her, I said, ‘Corinne, you have a gift. If you want to major in something else, fine,'” she says. “‘But you should minor in writing or do something with your writing because it IS a gift, and if you don’t use it, it’s going to atrophy.'”

It didn’t take Brinkerhoff long to figure out that Clumsky was right. But she did stray briefly.

“I wanted to be an astronaut for a long time, and I think I actually declared myself an aerospace engineering major at the beginning of college,” says Brinkerhoff, who has a bachelor’s degree in linguistics from Truman State University in Kirksville, Mo. “And then I was like, ‘Who am I kidding? This is not me – I’m a word nerd.'”

While at Truman, Brinkerhoff started working for the TV station and caught the entertainment bug. She began considering how she could combine her two interests.

“It didn’t take an aerospace engineering major to put it together,” she laughs. “Obviously, I thought, I’ll write for TV.”

Brinkerhoff knew a linguistics degree wouldn’t get her far in Hollywood, so she applied to the master’s program at BU, not counting on getting in.

After eagerly completing the 18-month program in a year, Brinkerhoff moved to L.A. and applied for an internship at David E. Kelley Productions – a firm she had visited on an alumni networking trip the previous spring.

“I just had this strange feeling that I wanted to come back there, that it was going to be an important place for me,” she says.

Her instincts were right.

She parlayed her internship into a permanent gig that involved doing legal research for Kelley’s scripts. When he asked her to pitch some of her own ideas for the show last September, Brinkerhoff took the initiative to turn one of them into a spec script. A few days later, Kelley asked to read it.

He liked it enough to ask the writing staff to consider it. They liked it, too.

“They called me into the writers’ room. It was really scary,” Brinkerhoff recalls. “They were all sitting there, and I walked in and they said, ‘Corinne, we’re buying your script.’ And I freaked out.”

Brinkerhoff got to sit in while the writers tweaked and rewrote parts of her script to fit what only they knew was coming in the show. The main and secondary storylines remained pretty much intact.

“It was really exciting because then when I went down to the set and they were shooting it, it was great to hear Candice Bergen say something verbatim that I had written on spec, on a lark, in July,” Brinkerhoff says. “It was just incredibly surreal.”

Her parents – Lawrence real estate agent Cory Brinkerhoff and his wife, Cindy – flew out for the eight-day taping in November.

“It’s just pretty cool to watch those actors and actresses read those lines that our daughter wrote,” Cindy Brinkerhoff says. “Several people there at the TV studio said it was unbelievable that she was 25 years old (at the time) and her script got published. But she’s just one of those kids where she gets a goal in her head and she just goes for it.”

Brinkerhoff’s show will air Feb. 14; plot details will be released a week ahead of time. Her parents are planning a watch party at their home. “I won’t allow anybody to speak during the show,” Cindy says.

In the meantime, Corinne has hired an agent and is working on her next script for a different show.

She’s honored that her first break came on a series she holds in such high esteem.

“I think the bottom line of what I really love about the show is being able to tow the line between humor and drama effectively,” Brinkerhoff says. “You think more with this show than with so many things on television, and that’s something about it that I just respect so much.”