It is a gripping love story about two individuals whose unconventional affair is not easily understood by the rest of society.

“Brokeback Mountain,” on the other hand, is a monotonous and often inadvertently campy romance that rivals “The Hours” as the most overrated movie of the decade. Talk about making mountains out of molehills.

Although the picture is reputedly “cutting edge” in its portrayal of two men (Heath Ledger and Jake Gyllenhaal) who share a secret relationship throughout their adult years, in many ways it’s a formulaic “chick flick” in which the white-bread male lead has been replaced by two white-bread male leads.

In other respects it’s just a variation of the dinner theater play “Same Time, Next Year” but featuring gay cowboys.

To use a more accurate term, they aren’t really cowboys. They’re shepherds.

The film begins in 1963 when the laconic Ennis (Ledger) and impetuous Jack (Gyllenhaal) are hired to tend sheep on Wyoming’s Brokeback Mountain.

After many chilly nights together, their bond turns physical. At the end of the summer, Ennis returns home to marry his sweetheart, Alma (Michelle Williams), and Jack hooks up with rodeo queen Lureen (Anne Hathaway).

Yet the men keep rediscovering each other over the course of the next few decades, and their pent-up emotional longings slowly corrode relationships with wives and children. 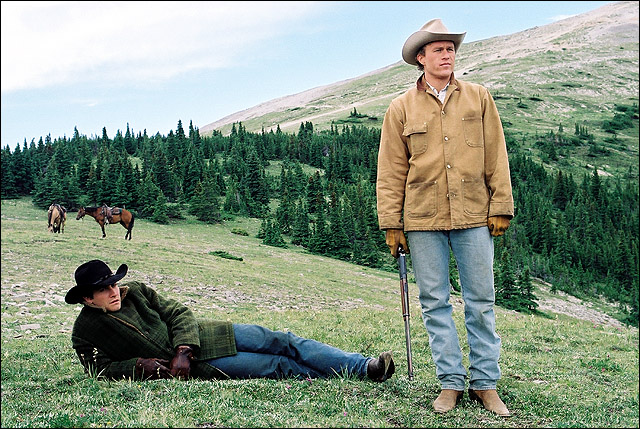 Based on the E. Annie Proulx short story, “Brokeback Mountain” has the opulent, drawn-out pace of a drama enamored with its own self-importance.

While the setup has real possibility, the story’s central theme of unquenchable romance simply falls apart because the principal characters are so dull.

Ledger (“The Brothers Grimm”) has been slathered with all kinds of acting accolades for portraying this mumbling Marlboro man. Funny, because the Australian hasn’t given an above-average performance in his 13-year career. Yet suddenly he’s Oscar-caliber, earning superlatives from critics such as “astonishing,” “brave” and “transcendent.”

I guess it’s possible to misinterpret his shallowness for introspection.

And Ledger makes it even easier to read one’s own feelings into Ennis’ behavior because his ridiculous “Southern” accent renders much of what he has to say impenetrable.

In fact, the final line of the film is a total mystery. I actually rewatched the ending (courtesy of a studio DVD screener) four or five times and still have no idea what Ledger is muttering.

When the official disc hits stores it will hopefully have a closed-captioning feature.

Director Ang Lee (“Hulk”) wants to make sure that the straight guys being dragged to theaters have something to enjoy, so he throws two completely unnecessary nude scenes in that exploit the attributes of Williams and former “Princess Diaries” star Hathaway.

He also doesn’t want this demographic to think because these cowboys are gay that they are wimps, so he creates one of the most inane sequences of the year in which Ledger gets tough with a pair of bikers during a Fourth of July celebration.

What DOES “Brokeback Mountain” have to offer?

It’s certainly pretty to look at. Cinematographer Rodrigo Prieto rebounds nicely from his yucky work on “Alexander,” capturing lush, empty scenery that reflects the social chasm that separates the men.

The always reliable Gyllenhaal at least supplies more on-screen charisma than Ledger, though he’s far superior this year in “Jarhead” and “Proof.”

The picture does boast one exceptional performance: Williams. The “Station Agent” actress delivers a scene where she confronts her emotionally distant husband about his annual fishing trips that is the most devastatingly honest moment in the piece. She fully deserves her inevitable supporting actress nod from the Academy.

Otherwise, “Brokeback Mountain” merits nothing more than nominations in a few technical categories.

Those wanting to see similar subject matter portrayed with real passion and believability should rent “Boys Don’t Cry,” for which Hilary Swank won her first Oscar. There is more depth in five minutes of that movie than in the entire two hours and 15 minutes of this prolonged, forgettable enterprise.