A Lawrence barbecue restaurant and catering business closed this week and has been sold to make way for an auto dealership.

Custom Highline sells used cars, and often has high-end vehicles – such as Mercedes, Lexus and Lincolan models – lining the parking lot that previously had been home to Rueschhoff Locksmiths and Security Systems.

The Quick’s location offers a larger lot and a building that could be adjusted to accommodate a showroom.

Zarif Haque, Custom Highline president, declined Wednesday to discuss plans for the property but did say that a site plan was in the works. 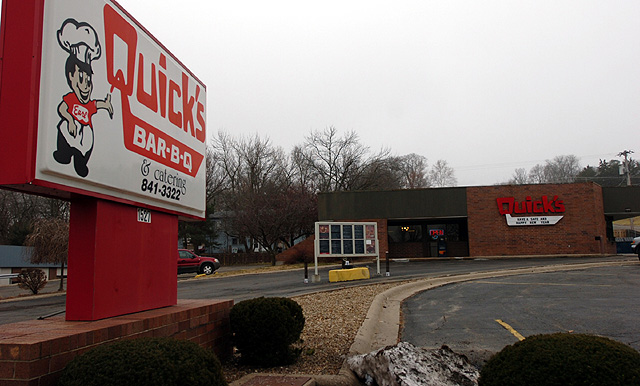 Quick's Bar-B-Q, 1527 W. Sixth St., closed this week after 10 years of business in Lawrence. Custom Highline, an auto-locating and sales operation, is preparing to occupy the site.

The sale brought an end to Quick’s, a decade after it opened in the former Vista restaurant. Owner Ron Quick said that he hadn’t had any plans to close the place until he was approached unexpectedly about selling the building.

Quick declined to disclose the sales price, but did acknowledge that it was higher than the $521,800 valuation assigned to the property and building by the Douglas County Appraiser’s Office.

“I closed the deal and I’m done, so I’m happy as far as that goes,” Quick said. “It was a good sale price. I’m not getting rich on the deal; it’s expensive doing business in Lawrence. I had a great 10 years. It’s just the right time for me.”

Quick is returning to Kansas City, Kan., where he and his wife, Janet, continue to own the original Quick’s Bar-B-Q at 1007 Merriam Lane. The Lawrence shop’s closing leaves 10 employees out of work.