Wearing a sleeveless No. 27 jersey and with a more up-and-down frame than most of his fellow, thicker defensive linemen, former Kansas University standout Charlton Keith fared well at Monday’s NFL Combine workouts.

He left content with how he performed under the spotlight.

“It was around what I really wanted to do,” Keith said from an airport in Chicago on Monday night. “I wasn’t going to do anything crazy. I just wanted to come out there and show the guys I could run. My times were just as good as some of the other guys, if not better.”

Defensive linemen took center stage Monday at the Combine in Indianapolis, and Keith weighed in as the lightest of the bunch at 238 pounds. His frame leads to wide speculation that he could be moved to linebacker at the next level, like former Jayhawk David McMillan was last year with the Cleveland Browns.

But for now, Keith is staying put as a rush end.

Monday, Keith ran the 40-yard dash in 4.78 seconds on the RCA Dome turf, ranking him fifth among 25 or so in his group. He also ran a three-cone drill in 7.03 seconds (second only to Alabama’s Mark Anderson) and the long shuttle in 11.98 seconds (fourth overall).

In addition, Keith said he did 16 repetitions of 225 pounds of the bench press, but three of them were ruled no good.

Keith ranked right up there in several of the categories, but what it means is unclear because his competition is hard to figure.

It’s possible each interested NFL franchise has a different opinion on how to utilize Keith. He could be a rush end in 4-3 defensive sets (with significant weight gain) or an outside linebacker in 3-4 formations. 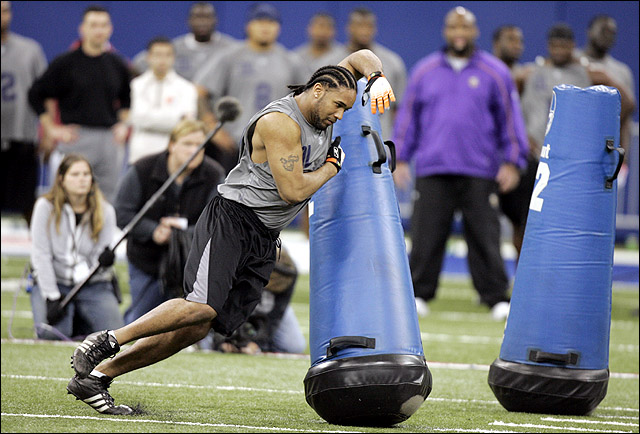 Charlton Keith of Kansas participates in drills during the NFL scouting combine in Indianapolis, Monday, Feb. 27, 2006.

It all depends, perhaps, on his weight. Keith said 238 was the heaviest he’d been, and he feels he can be well into the 240s by the time of the NFL Draft on April 29.

Until then, he’s not going to sweat it too much.

“It doesn’t bother me,” Keith said. “I was the lightest, but I gained some weight, and that’s a (personal best) for me.”

Next up for Keith is KU’s Pro Day on March 15. He said he was unsure what he would participate in there, though he added he definitely would try to boost his bench repetitions.

Keith will join a number of other Kansas seniors, including Nick Reid and Mark Simmons, at the Pro Day, where KU coaches will try to emulate the testing done at the Combine in front of a smaller pool of NFL personnel.

Meanwhile, the only other Jayhawk in Indianapolis is defensive back Charles Gordon, who is scheduled to do his physical drills today. Gordon – whose size and timed speed may hinder his stock – didn’t come in as the shortest or lightest defensive back at the Combine. His agent, Kenny Zuckerman, said last week that Gordon was around 183 pounds.

“The Combine will be a good venue for him to compare apples and apples,” Zuckerman said. “Then you’re really able to determine how they break down.”

Gordon’s workout can be seen today at 10 a.m. on the NFL Network (Sunflower Broadband channel 154).