Home of sacred shroud is steeped in black magic

Turin, Italy ? The Gate to Hell is in the center of the city’s sewer system. Turin is one of three cities in the world forming a triangle of black magic. And Nostradamus once lived in the neighborhood.

The history of Turin is steeped in black magic dating to Roman times; centuries full of terrifying lore and bloody mayhem. How much of the deviltry is true?

After all, the presence of bad juju just might explain the calamities that have befallen the U.S. Olympic team. And figure skater Johnny Weir’s lament about having a black aura.

Bode Miller couldn’t ski straight Saturday. On Friday, Lindsey Jacobellis couldn’t keep her hand off her snowboard. Lindsey Kildow crashed in a spectacular wipeout during a downhill training run just before Valentine’s Day. And Weir, who sometimes says weird things, blamed a missed bus for his fall from second to fifth in men’s figure skating.

Not a good color for egos or esoterica – which is the English word Italians use when translating “magic.”

Turin, according to the convoluted logic of occult experts, is on the 45th parallel and thereby constitutes one of three cities forming a “triangle” of black magic – London and San Francisco being the others – all united by lines of negative energy.

The Piazza Statuto is the “black heart” of the city’s Satanic influences, home of Turin’s gallows and a stone monument to those who died building the Frejus tunnel connecting Italy and France. The monument, dedicated in 1879, depicts men in loincloths buried in rocks, their faces in varying degrees of agony.

It is not pretty statuary. Underneath is a drain covering the confluence of the city’s ancient sewer system.

And remember – it’s also the Gate to Hell, according to lore.

A handsome angel tops the rockpile. Many say he is Satan, the beguiling, beautiful, ambitious angel thrown out of heaven for overzealousness. 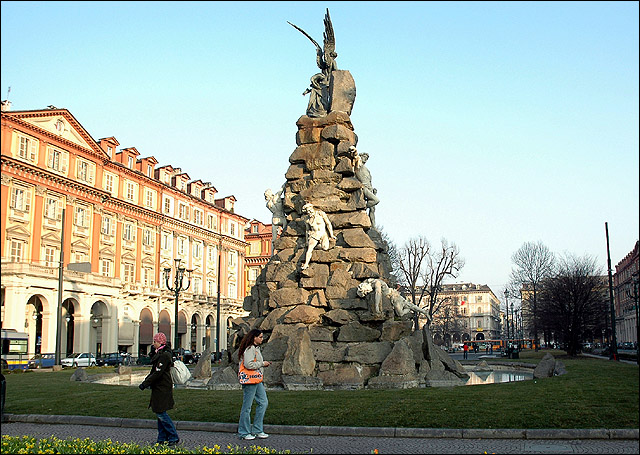 The stone monument to those who died building the Frejus tunnel connecting Italy and France standing in the Piazza Statuto in Turin Italy Saturday Feb. 18, 2006 and is considered to be the city's 'black heart'. The history of Turin is steeped in black magic dating to Roman times; centuries full of terrifying lore and bloody mayhem. How much of the deviltry is true?

Luckily for Turin, there is a counterbalance. Not far away is one point on the triangle of white (“good”) magic (the others being Lyons and Prague). Here is the Duomo, which houses the Shroud of Turin, which some believe was used to cover the crucified body of Jesus Christ. It is hidden away and displayed only upon order of the Vatican.

Back on the bad side of town, a walk down the Via Michele Lessona will put you on the street where Nostradamus – 16th century seer and prophet – briefly lived.

The meanings of his predictions – written in obscure, rhymed verse laden with symbolism – have been argued for centuries. There is one that appears self-explanatory. “You will not find me alive at sunrise,” he told a priest on the night of his death.

To this day, soothsaying and Satanism live in Turin. Tours are offered of demonic statues, door knockers, and churches such as the Misericordia, where prisoners were given last rites before execution and visitors can view a list of those put to death, their black hoods, and a small glass used for their last drink.

On Saturday, the Statuo plaza was crowded with tourists bearing Winter Games balloons. At an outside bookseller’s stall, a man from Turin, bundled against the wet cold, proudly showed the title of a book he had written 10 years ago about devil worshippers in his home city.

“Turin is the No. 1 city for Satanic cults,” he says. “I wish I’d never got involved. If I had only known, I wouldn’t have done it.”

What he did, he said, was pose as someone interested in Satanism, and through word of mouth and friends introducing him to other friends, he eventually found a group of well-to-do black magic practicers and hung out with them.

His first name is Massimo, but he declines to provide his last name, saying he doesn’t want the witches he wrote about to know his real name. His nom de plume is Yves Clement.

Originally, he was going to write a television screenplay, but the deal fell through. He wrote a novel instead, “The Heart of Andrea.” It’s full of references to “atrocious crimes” bragged about by devotees of Satan, he said. Including human sacrifices.

Meeting such folks frightened him, he said. And though he doesn’t believe in the devil, he says the people he met believe in him. And do bad things because of that belief.

Among Italians, his comments are not atypical.

“Si,” replied Luca Infantimo, sitting on a park bench near the shrine to dead tunnel workers. “I believe there are Satanic sects and I believe there is a Satan. I cannot explain it. I had a very religious education.”

Infantimo is from Genoa, and he is visiting the city to see his girlfriend, Cristiana Sovailescu, a Romanian exchange student who is studying languages at the University of Turin.

She is an Orthodox Christian. She said she believes, too, based on things she saw in her native Bucharest.

“I’ve seen people possessed, people in church who were shouting and trying to take down the cross,” she says.

Do they know they are sitting just yards from the Gate of Hell?

Infantimo starts laughing. So does his girlfriend.