“Ah, the Wolf did it. Talk about profiling.”

Those expecting a standard retelling of Little Red Riding Hood won’t find it in “Hoodwinked.” The animated effort provides an irreverent, imaginative and often just plain weird spin on the classic fairy tale.

Part “Rashomon”-style flashbacks from differing viewpoints, part detective story and part musical, “Hoodwinked” seeks to explain what really happened that afternoon when Red, Granny, the Woodsman and the Wolf all converged in one house.

“What big ears you have,” Red grills the Wolf disguised as Granny.

He responds, “All the better to hear your many criticisms.”

Animated features have tried to increase their hip factor over the last few years by mining pop culture for punch lines. There’s been a certain desperation to the efforts, with films like “Shark Tale” and “Chicken Little” relying too much on puns and associations instead of writing actual jokes.

“Hoodwinked” doesn’t always travel the high road in this regard – making Granny an extreme sports enthusiast who says “f’shizzle” is especially lame – but it has a whole lot more going for it than topical rehash.

The story centers on Red (voiced by Anne Hathaway), whose investigation of a “Goody Bandit” who is plaguing the forest leads her to Granny’s house. She goes through the what-big-parts-you-have routine with the Wolf (Patrick Warburton) before a tied-up Granny (Glenn Close) escapes from the closet and an ax-happy Woodsman (Jim Belushi) barrels through the window.

The ensuing police investigation into the crime is led by amphibious detective Nicky Flippers (an excellent David Ogden Stiers).

Nicky Flippers: “Why do they call you Red?”

Red: “They call me Red because of the red hood I wear.”

Nicky Flippers: “What about when you’re not wearing it?”

By piecing together accounts from the four principals, Flippers deduces a fifth version of the story that exposes a completely different truth.

Credit writer-directors Cory Edwards, Todd Edwards and Tony Leech with the smart dialogue and the general structure of the piece. Admittedly, the picture is often more clever than entertaining – it rarely generates the kinetic momentum of a Pixar project, despite an attempt to insert more ticking-bomb action into the third act. 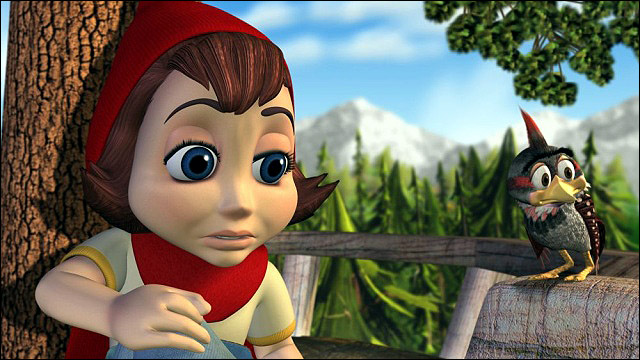 Red (voiced by Anne Hathaway) contemplates a mystery that is corrupting her woodland neighborhood in the animated Hoodwinked, which attempts to present the tale of Little Red Riding Hood from different perspectives.

The movie is weakest in the area of sight and sound.

The visuals have the blocky, garish look of a half-hour episode from Nickelodeon. They’re not necessarily unsuitable, they just won’t be competing against “Wallace & Gromit” or “Howl’s Moving Castle” in any animation categories.

The problem with the soundtrack is coherence. The film makes use of a Ben Folds ballad but then follows it with a jaunty musical jingle about Schnitzel Sticks. The soundtrack needs to commit to an original score (a la “The Incredibles”) or to fill it with contemporary pop songs (like “Curious George”). Either scenario is better than trying to alternate between both.

There is a certain unbridled attitude to “Hoodwinked,” as if the filmmakers had the option to throw whatever gags or characters they wanted at the screen. This occasionally obnoxious tactic accounts for both the film’s shortcomings and its charms.

As Detective Flippers says, “Pieces of a puzzle make funny shapes, but they still fit together in the end.”