For Corinne Brinkerhoff, the first time’s a charm.

The Lawrence native’s freshman crack at her dream job of writing for television turned into an episode of “Boston Legal,” an hourlong courtroom drama/comedy that centers around the Boston law firm of Crane, Poole & Schmidt.

Taped in November at the studio of series creator David E. Kelley, the show airs Tuesday night on ABC.

Brinkerhoff, a 26-year-old Los Angeles resident, has been waiting patiently for the big day.

“I’m nervous and excited. In all, I feel incredibly fortunate to have had this experience, and I hope people enjoy the show,” she says.

The Journal-World first featured Brinkerhoff’s story on Jan. 10, explaining how the Lawrence High School graduate parlayed an internship at David E. Kelley Productions into a job as the television giant’s personal assistant.

After being promoted to development manager, Brinkerhoff told her boss that her dream was to write, and he asked her to try crafting a script. She won over Kelley and the show’s writing staff on her first attempt.

In keeping with the hallmark of “Boston Legal,” Brinkerhoff’s script is not without controversy. She found inspiration for the main storyline in the conscience clauses that allow pharmacists and doctors in some states to deny certain medications and procedures that don’t align with their moral compass.

In the episode, attorneys Shirley Schmidt (Candice Bergen) and Denise Bauer (Julie Bowen) defend a teenage girl who was brutally raped and is now pregnant. The girl wants to sue the Catholic hospital where she was treated because they refused to provide her with emergency contraception.

“I thought it was an issue that deserves a national audience,” Brinkerhoff says. “I think it’s a really tricky issue that people are divided on.” 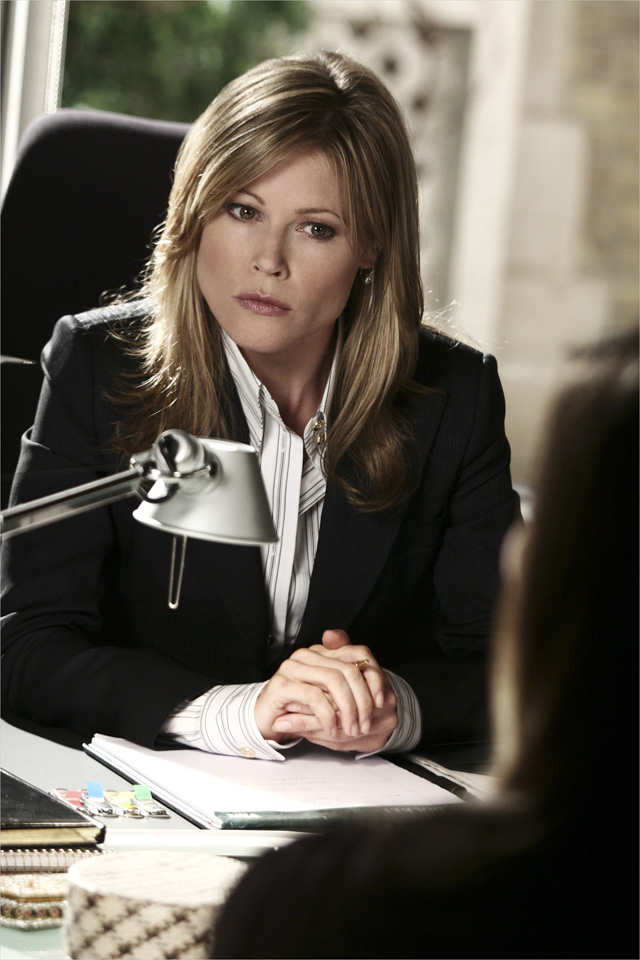 In Tuesday's episode of Boston

Meanwhile, Alan Shore (James Spader) files a discrimination suit against a private school that refuses to admit a gifted 9-year-old girl with nerve damage that makes it impossible for her to smile.

And since an attempt by Brad Chase (Mark Valley) to bribe Denny Crane’s (William Shatner’s) fiancee, Beverly Bridge (Joanna Cassidy), failed miserably, she threatens to tell Denny what happened unless Brad can find a legal loophole to save her sickly cat from her ex-husband, who wants to take it off of life support.

“There was one story (I wrote) that didn’t work with what was happening in the show with William Shatner’s character,” Brinkerhoff says.

That often happens when an outside source creates a script; in those cases, a show’s dedicated writing staff simply tweaks the script so it works with what only they know is coming in future episodes.

“I think the rewriting process was one of the biggest parts of the learning process,” Brinkerhoff says. “You get attached to what you’ve created, but you have to look at the big picture, what’s best for the show.”

Brinkerhoff has since hired an agent and is working on her next script for a different show.

While her parents are watching “Boston Legal” Tuesday evening at Lawrence’s Red Lyon Tavern, Brinkerhoff will be checking out her handiwork in LA.

“A friend of mine is throwing a watch party,” she says, “so I’ll be watching it live with my friends, my agent and my boyfriend, who’s flying in (from Lawrence.)”

An episode of “Boston Legal” that was written by Lawrence native Corinne Brinkerhoff airs at 9 p.m. Tuesday on ABC (Sunflower Broadband Channels 9 and 12).
Her parents, Cindy and Cory Brinkerhoff, will be host to a watch party at the Red Lyon Tavern, 944 Mass. Everyone is welcome.