Is downtown’s nightlife a boon or headache?

It was during a discussion of the city’s future two years ago that Commissioner Sue Hack worried aloud whether the sometimes-rowdy Massachusetts Street nightlife was driving away downtown’s other customers and visitors.

Following last week’s early morning downtown shooting that killed one man and injured another – both from out-of-town after a hip-hop show at the Granada – Hack repeated her “three downtowns” sentiment.

Downtown’s shifting identities can be a mixed blessing, she said.

“We have created a lot of really neat nightspots, and that contributes to the overall character of Lawrence,” she said. “I think the concern is sometimes it attracts individuals to the community who don’t live here, aren’t stewards of the community, behave in a way we’re not too happy about.”

But Jerry Neverve, who co-owns the Red Lyon Tavern downtown, is impatient with such talk. Twenty years ago, he said, there weren’t so many bars along Massachusetts – and not so much life. 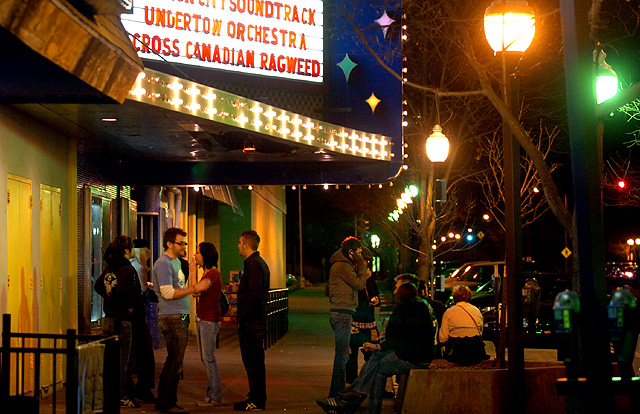 Lawrence's downtown has a different character depending on the time of day. Patrons congregate Thursday night for the Neon Dance Party at the Granada, 1020 Mass.

“It was not too vibrant back then,” Neverve said last week.

The city’s nightlife, he said, aids the daytime economy.

“People can go to dine, or to a concert or even see a movie again,” he said. “Those people walk by the windowfronts, and they see things – they see something they’re interested in, they’re back to get it later.”

The question remains: Are three downtowns too many?

City Hall estimates that a third of all business space downtown is devoted to retail – boutique merchants, mostly, such as antique stores or specialty toy shops. “Non-retail” businesses such as banks occupy another 45 percent.

Just 14.7 percent of downtown, officials say, is occupied by bars and restaurants.

The daytime and nighttime crowds aren’t completely segregated. Lindsay Frentrop, a 25-year-old Lawrencian, ventures to Massachusetts both for shopping and socializing.

“I like the clothes stores, the toy store and shoes,” Frentrop said of her daytime exploits. “I’d say during the day, it’s more family-oriented, the older people, sightseeing. At night, it’s just fun.”

Eileen Strong, who owns Strong’s Antiques and Aimee’s Coffee Shop downtown, has another description for the night crowds. 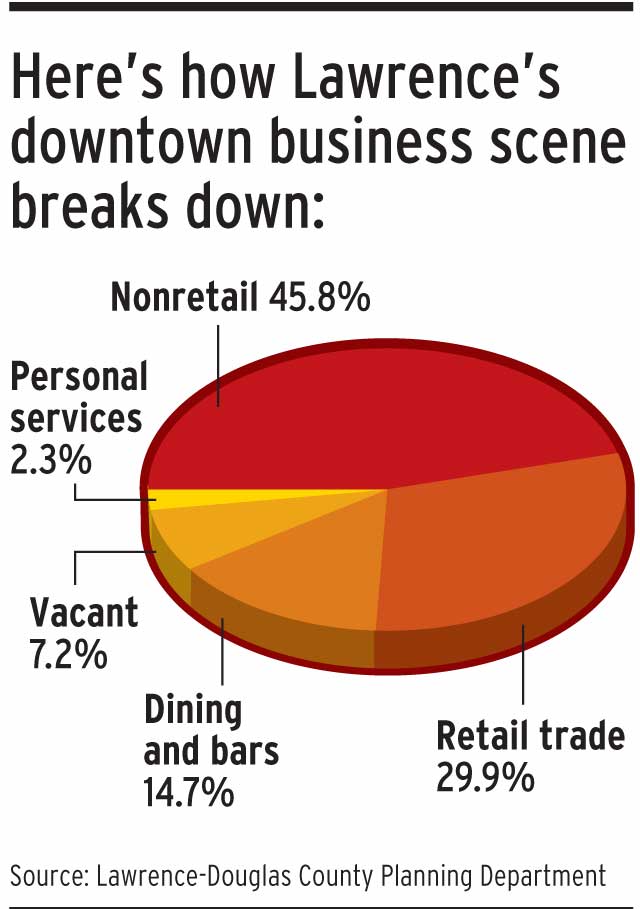 “The nighttime group,” she said, “can be rowdier at all times.”

Mayo said a recent study of Minneapolis-St. Paul showed that the city’s daytime economy and nightlife hubbub had little effect on each other.

Mohammed Iskandrani, owner of Aladdin Cafe, agrees. He closes his restaurant at 10 p.m. and mostly avoids the alcohol-fueled late-night crowds.

“If anything crazy happens,” he said, “it happens after 10.”

But Strong isn’t so sure.

“I think the nighttime may have an effect on the daytime,” she said. “If people perceive this to be a rowdy or unruly or unsafe area, then they also do not come during the day.” 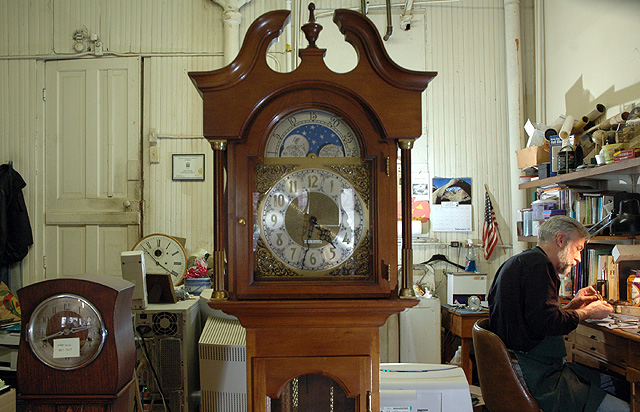 Mayo said one incident, like last week’s shooting, shouldn’t have that negative effect.

But “it only takes a few times for an area to be stigmatized that it has economic consequences,” he said.

City Hall doesn’t want that to happen. On Tuesday, the commission will consider an ordinance toughening rules against carrying weapons in and around the city’s bars. City Commissioner David Schauner has also suggested discussions about limiting “the number of places that serve alcohol downtown.”

At the Red Lyon, Neverve noted that the city had long required new businesses to make more of their money from food than alcohol. 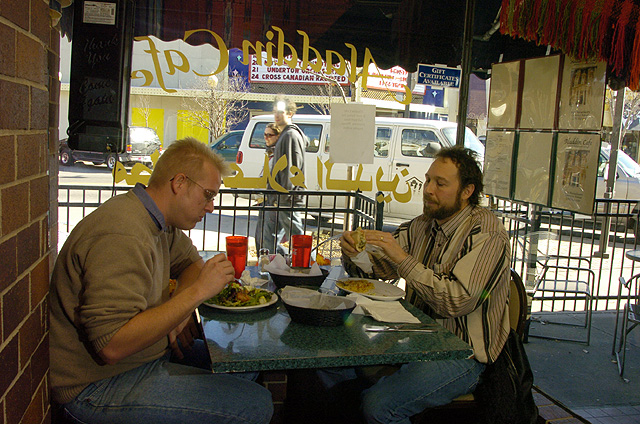 Despite her concerns about the nightlife, Eileen Strong said she was less worried about violence than about how rising property values were affecting the “mom-and-pop” atmosphere among Massachusetts Street retailers.

“That has made a bigger change in downtown than any single event, good or bad,” Strong said.

And Hack, who made the original “three downtowns” observation, said that, overall, downtown was still a vital part of Lawrence.

“I think downtown is the cultural, civic, business and retail center of this community,” she said. “We don’t go very many places outside of Lawrence where people don’t envy what we have.”