There’s always a moment in the kidnapped family/home invasion thriller when the good guy is forced to perform some task the bad guys demand, but he finds a way to turn the tables on them.

What separates the successful movies with this premise (“Panic Room,” “Air Force One”) from the stupid ones (“Trapped,” “Nick of Time”) is if the hero thinks his way out of the dilemma rather than fights his way out of it. The smart screenplays exploit the hero’s intelligence and resourcefulness. The lazy ones make him go all Rambo.

The first hour of “Firewall” delivers a tight, nerve-wracking setup. But once the fistfights, car chases and stray explosions begin to mount, the movie veers into exponentially dumb overkill.

Harrison Ford stars as Jack Stanfield, the head security executive for Landrock Pacific Bank, which is in the process of transitioning toward a global merger.

When his architect wife (Virginia Madsen) and two kids (Carly Schroeder and Jimmy Bennett) are taken hostage in their Seattle house by tech-savvy goons, Jack is compelled to loot his own bank. Hounded by the ruthless British leader of the gang (Paul Bettany), Jack must continue going to work each day until he can find a loophole in the security system.

Meanwhile, his family begins to suspect that the criminals won’t leave peacefully once the money is in their possession.

English director Richard Loncraine (“Richard III”) embarks on his first Hollywood venture, and he seems to have everything stacked in his favor. Ford can effortlessly play this type of hard-nosed domestic guy (and aren’t they all named Jack?). He’s surrounded by a cast of fellow Oscar veterans, including Madsen, Alan Arkin and Robert Forster.

Yet cast and crew can only do so much when working from a screenplay (by former actor Joe Forte) that hopes the audience won’t be able to pick apart the goofy technobabble that dominates the plot. Even MacGyver couldn’t use a computer screen capture from a cell phone to hack into 10,000 bank accounts.

“Firewall” is best when at its most claustrophobic, specifically while the Stanfields are prisoners of their own waterfront house (which looks suspiciously like the same property in “When a Stranger Calls”). There’s a nice moment when the daughter character asks one of the crooks why he hates them so much. 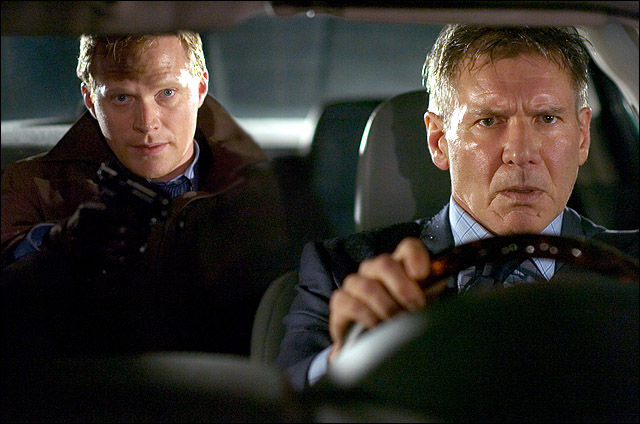 Bill Cox (Paul Bettany), left, takes Jack Stanfield (Harrison Ford) and his family hostage in an effort to compel the security executive to rob his own bank in the thriller Firewall.

At what point does it all start to fall apart? The analytical answer would be as soon as the action becomes removed from the home or office.

The snarky answer is once 63-year-old Ford starts beating the bejesus out of trained mercenaries three decades younger than himself.

When “Firewall” goes south it does so in a hurry, racking up scenes that are laugh-out-loud funny in an inadvertent way. Among these gems are a detour to a black church revival where Jack’s geeky nerd employee is playing bass in the choir’s band – a scene about as realistic as a Hilary Duff “live” concert. And how about a vicious villain who isn’t shy about offing his own men, but makes sure the lovable family dog accompanies his victims when he transfers them to his hideout?

Modern thrillers are getting better at exploiting the technological age we are living in. Cell phones, Internet, e-mail, hacking and global positioning locators all factor heavily into “Firewall.” But all the gadgets in the world can’t substitute for common sense.