As New Orleans continues picking up the pieces in the wake of Hurricane Katrina, hammers are pounding in Lawrence.

A Kansas University architecture class plans to design and build a community center for the residents of New Orleans’ Seventh Ward.

“They’re really hungry for this sort of project,” Nils Gore, associate professor of architecture, said of his students. “They’re hungry for reality.”

The adventure begins Thursday when the students travel to New Orleans. They will meet with residents and discuss their needs. The plan: to design the Seventh Ward Building Arts Gallery, a community drop-in site with an outdoor workspace and tool-lending library. Initially, it will focus on helping residents rebuild. The site would eventually be expanded to be used as a cultural community center, with language, crafts and other classes.

The project is a collaboration between the KU School of Architecture and Urban Design, the Tulane University City Center, and Neighborhood Housing Services of New Orleans.

Students recently built several community bulletin boards for the neighborhood, which they will take with them to New Orleans. The students will design and build the center in Lawrence, then dismantle it for traveling and put it up in New Orleans.

Helen Regis, a Seventh Ward resident and community activist, said the chance to work with KU was unique for the community.

The neighborhood, which Regis refers to as the Seventh Ward St. Claude community, stretches from St. Bernard to Elysian Fields Avenue and from Claiborne to St. Claude. Katrina flooded the area, but many homes in the neighborhood were hit harder by wind and rain. Fallen trees smashed roofs. And the flood waters killed trees and plants. 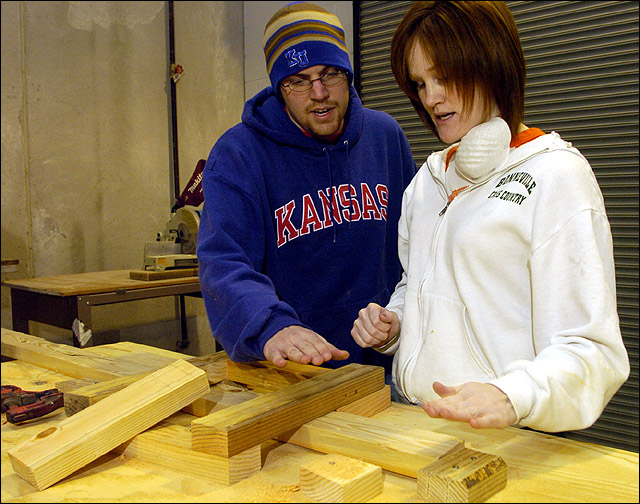 Ken Simmons and April Young, both Kansas University architecture students, look over some angles for a community center their architecture class is building to help residents of the Seventh Ward in New Orleans.

Regis estimated 50 percent of residents had returned, but some schools had not yet opened. On some streets, there is bustling activity, Regis said. On others, houses are dark and silent.

“It’s still very much not the neighborhood it was before the storm,” Regis said. “It’s limping along, I would say.”

But the diverse community, home to such jazz musicians as Jelly Roll Morton and Manuel Perez and still a place where musicians, artists, young families and retirees find residence, will rebound.

The 17 KU students in Gore’s Studio 401 course were warned early about the project. If they weren’t up to it, they were given the opportunity to drop the course. No one bailed.

“People bribe us to get in,” senior Lindsay Kenkel joked.

After years of designing structures on computers and building models, many of the students will be building a real structure for the first time.

“We’re all kind of learning to build as we go along,” senior Laura Lafoe said.

And there’s a thrill that comes with building something to benefit others.

“It makes the project more exciting that someone is excited to see your work,” senior Valerie Cantrell said.

The project will start out small, but a multi-year plan would have students expanding on the building in the future. The end result depends on funding, Gore said. Just starting the project and building the tool storage building will cost about $60,000 for design and construction. The class is gathering support from a variety of places, including cash donations and the donation of construction materials. The students also raised more than $500 selling Mardi Gras beads, mainly to cover travel costs. Gore said he was optimistic the class would accomplish what it had set out to do.

“It’s not your average project,” he said.