There is a hushed moment in “Capote” when author Truman Capote prepares to recite excerpts of his yet-unfinished “In Cold Blood” at a public reading.

“The village of Holcomb stands on the high wheat plains of western Kansas, a lonesome area that other Kansans call ‘out there’ …” he begins.

The scene recreates the first time an audience heard any part of the immortal novel, and it’s also the first a viewer of the film gets to listen to any of it. Until that point, the words have been locked inside the writer’s head.

As Capote (played by Philip Seymour Hoffman) continues, it becomes apparent that the man somehow is transcending the boundaries of nonfiction writing. It’s impossible not to get mesmerized by the power and splendor of his language.

In many ways the Oscar-nominated “Capote” does justice to this investigation of a small-town murder and the man who told it. The drama never quite achieves the level of artistic precision as “In Cold Blood” itself – few works have – yet it does a capable job of capturing a time and place, bringing to life several unforgettable personalities and illustrating the moral self-loathing of a writer whose real-life subject must die before he has a decent ending to his book.

Like the best cinematic performances to depict a historical figure, Hoffman offers more than just an accent and mannerisms.

Sure, he nails the fey, droll, often condescending demeanor of the diminutive author. But he is even more successful at rendering the moral conflict the man faced while watching as Perry Smith (Clifton Collins Jr.) and Dick Hickock (Mark Pellegrino) awaited their inevitable execution for slaughtering Holcomb’s Clutter family.

“Capote” is both a journalistic procedural and a fish-out-of-water tale, as Capote drags his buddy Harper Lee (Catherine Keener) to rural Kansas in 1959 to research the killings. (She would soon win the Pulitzer Prize for writing “To Kill a Mockingbird,” which irritated him to no end.) But its central heft involves the complicated relationship between the novelist and murderer Smith. 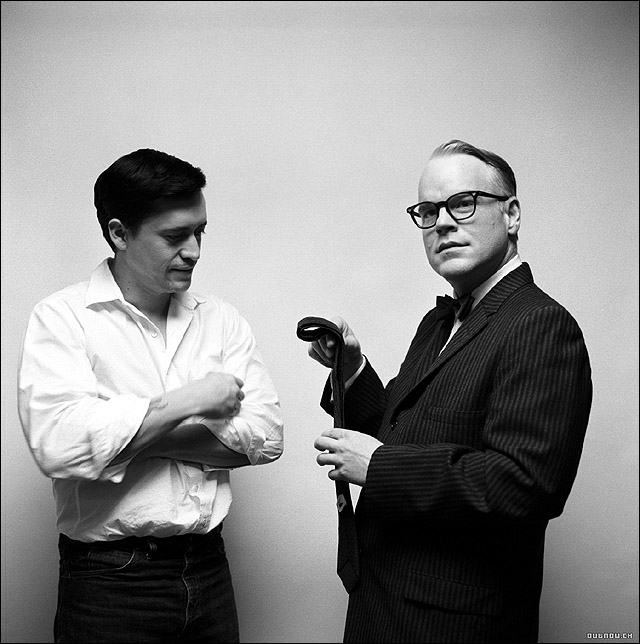 “It’s as if Perry and I grew up in the same house. And one day he went out the back door and I went out the front,” Capote says.

Both outsiders, both victims of broken homes, Capote found a soulmate in Smith – and a meal ticket. And he likely fostered a crush on the drifter.

Director Bennett Miller and screenwriter Dan Futterman (working from Gerald Clarke’s novel) don’t exactly play up the sexual overtones between author and subject. Rather, they focus on the parasitic nature of the men’s relationship. It’s during these scenes that the full range of Collins Jr.’s portrayal begins to take shape. When he finally reveals the clinical details of that horrific, senseless night to Capote, the movie achieves its most devastating moment.

Otherwise, there’s a certain drabness to the picture that is hard to pinpoint. Miller does a fine job of making modern Winnipeg double for ’60s-era Kansas – a task that could have been botched on a number of levels. Yet the setting is often presented as so mundane that the film itself starts to take on that quality.

The cast certainly helps add color. Chris Cooper (the reliable Kansas City-raised actor whose family actually had ties to the Clutters) plays deadpan FBI agent Alvin Dewey, who bridges the gap between the East Coast intellectuals and provincial farm folk. His initial meeting with Capote provides an amusing wake-up call that the investigation takes precedence over some celebrity journalist poking around.

On the flip side, veteran actress Keener never really resonates as Lee. It’s too bad the Academy chose to shower her with a supporting actress nomination for the role when she’s far more quirky and interesting this year in “The 40-Year-Old Virgin.”

Much of the film is like Keener’s performance. Effective but unexceptional. Believable but not necessarily compelling.

Only during the moments of Hoffman’s introspection and Collins Jr.’s pathos does “Capote” truly seem alive.