Student writings will be added to West library

The authors huddled close in the quiet classroom Tuesday, noshing on cookies and sandwiches, each careful not to spoil their dinners.

The Author’s Tea, held Tuesday in a classroom at West Junior High School, celebrated the published works of the school’s “Written and Illustrated” class.

Lynn Burlingham has taught the class for eight years and led the students as they stood and presented the fruit of their labor.

The project was the culmination of weeks of work, including at least one night each week since September. 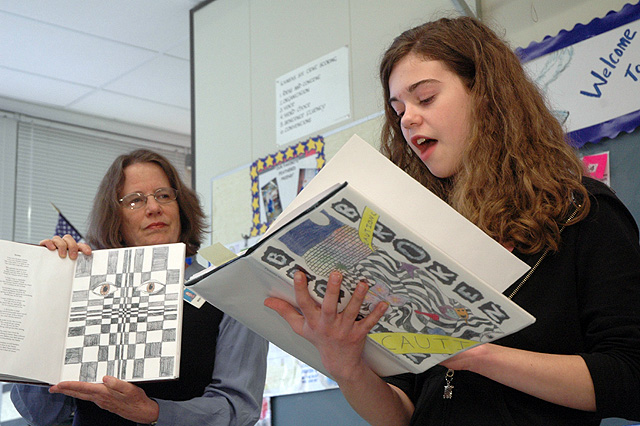 Pamina Buechner, right, an eighth-grader at West Junior High School, reads from Broken, a book of poems she wrote and illustrated, while teacher Lynn Burlingham displays the illustrations. West students read from their books Tuesday during an Author's Tea at the school. The students' books will be placed in the school library.

Many of the works were lighthearted and fictional, a way for students to put their likes or current interests on the record.

Ben Rosenbloom wrote a book about Norse mythology after a long bout with a video game.

“It merged into my subconscious,” he said as he held the book up for the class to see.

Up next, Darci Rodecap talked about one of her three – three! – books she wrote for the class, an interpretation of the classic Cinderella story where the stepsister is, instead, her gay stepbrother. Comedy ensued.

But for the most part, the books were a mile-marker for the students’ lives, touching on moments that could shape their adulthood.

Lily Robinson’s work, a book called “The Invisible Girl,” captured the student’s darker side – the side typically reserved for journals.

In a Gordon Lish-like moment, she tried to describe it for the class.

“This is an autobiography of myself,” she said. “It was exhausting, writing down some of these very serious issues.”

But descriptions failed. Instead, she read from the poem, her poem, that inspired the book.

Pamina Buechner chose a book of poems, a form that can often capture difficult times better than others.

She took time to read the book, called “Broken,” to the class.

“My parents are divorced,” she read. “My country split in two.”

There were other, deeper works on display Tuesday. Tess Murray wrote a book on philosophy based on months of study and self-reflection. Kelsey Cherland wrote a book describing the ways that globalization would lead to the world’s demise.

After the students and their parents cleared the room, Burlingham spoke softly about her student’s accomplishments.

“Patience,” she said, “that helps bring them along.”

The class, although part of the school’s gifted program, was open to everyone. Some of the kids could flat-out write, she said. Some struggled to finish their projects.

But after Tuesday, after every student stood triumphant at the head of the class and showed their small world their words on paper, Burlingham hoped they could now take their next step into the world.