Palestinian leader Mahmoud Abbas implored European donors to avoid a threatened cut in aid, which could devastate an already battered economy, force the Palestinian Authority into a fiscal crisis and cost tens of thousands of government workers their jobs.

A top Hamas leader promised Monday that aid would go only to ordinary Palestinians – not to attacks on Israel, which Hamas refuses to recognize – and said a Hamas government would be willing to have its spending monitored.

“We assure you that all the revenues will be spent on salaries, daily life and infrastructure. You can review this,” Hamas’ Ismail Haniyeh said in Gaza.

Israel said Monday that it would stop the monthly transfer of $55 million in taxes and customs it collects from Palestinian workers and merchants to the Palestinian Authority if a Hamas government is installed.

The so-called Quartet of U.S., Russia, the EU and United Nations agreed Monday that a Hamas-led government must commit to nonviolence, recognition of Israel and acceptance of existing peace agreements to maintain financial support, U.N. Secretary-General Kofi Annan said after a meeting of the group in London. 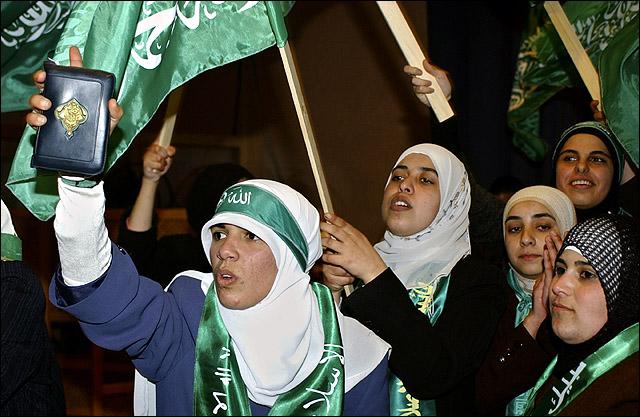 Supporters and members of the Islamic group Hamas hold green Islamic flags and a Quran on Monday during a Hamas rally celebrating the results of the Palestinian parliamentary election in the West Bank city of Ramallah. Hamas asked the international community on Monday not to cut aid to the Palestinians and called for dialogue with the West.

Europe is the largest donor to the Palestinian Authority, which had a $1.96 billion budget last year. About one-third of aid goes to salaries and the rest to rehabilitate Palestinians’ war-shattered infrastructure.

The U.S. gave $70 million in direct aid to the Palestinian Authority last year. Separately, the United States spent $225 million for humanitarian projects through the U.S. Agency for International Development last year, and gave $88 million for refugee assistance, according to the State Department.