As the creator of the wildly popular comic strip Pearls Before Swine, he’s simultaneously trying to captivate a generation that turns to “South Park,” “Family Guy” and “The Daily Show with Jon Stewart” for laughs AND make a living selling his strip to daily newspapers, whose subscriber base skews toward the over-50 crowd.

“It’s a fine line between entertaining the young people and not angering some of the more conservative older people,” Pastis says. “I did a strip a few weeks ago where I made a joke about that, that Pearls had finished 16th out of 20 strips. Sometimes I appear in my own strip, and Rat told me that ‘the older vote is just killing you.’

“And I got all this e-mail from people who were in their 60s and 70s saying, ‘Hey, don’t insult us. We read the strip every day.'”

Indeed, Pearls Before Swine – which will begin appearing in the Journal-World on Dec. 31 – attracts fans of all ages with its brazen, witty, cynical take on the world.

Pastis, a 38-year-old former attorney, lives in Southern California with his wife and two children. There he draws Rat – a quick-tempered, know-it-all rodent who spends his time berating his swinely pal – and the aforementioned Pig – a slow but lovable character who somehow endures Rat’s constant barbs.

Rounding out the cast are an activist Zebra, a brainy Goat and the barbaric, barely articulate Fraternity of Crocodiles. They’re all puppets in the offbeat, sometimes sadistic world that Pastis refuels one panel at a time – iPod headphones blaring – at a Santa Rosa coffee shop.

During a recent phone interview from his home, Pastis wanted to make it perfectly clear that he’s grateful to be joining the Journal-World’s comic lineup – and that it’s not his fault Foxtrot is exiting.

“I did not knock out Foxtrot. He left,” Pastis says of the strip’s creator, Bill Amend. “And I’m a big Foxtrot fan myself, so don’t get mad at me.”

Q: Are there any similarities between being an attorney and being a cartoonist?

A: I think they’re probably as diametrically opposed as they can be. The one you’re so mean on a daily basis and you’re always fighting. And the other job, you’re like a little kid, just sort of scribbling notes to make your friends laugh. When you’re a cartoonist, you sort of have to be, like, sensitive – or maybe open’s a better word – to what’s going on around you. When you’re an attorney, you’re just like a bulldog with your head down.

Q: Which is why you’re not longer in the legal profession?

A: I hated it. All I ever wanted to do when I was a little kid was be a cartoonist. But the odds of getting syndicated are just so long – like 6,000 to 1 to even get the syndicate to pick up your packet. You can’t count on that. … So I went to college and law school and became a lawyer and was a lawyer for nine years. Nine years too long.

Q: You’re very upfront about not being able to draw. What made you think you could make a living as a cartoonist?

A: I was crazy. I was nuts. I don’t know what I was thinking.

I think if it hadn’t have been for Dilbert and his art “quality,” so to speak, I wouldn’t have made it. I think Dilbert showed that if you could write a decent joke, even if you couldn’t draw that well, that your lack of drawing would one day be called style. If something is successful and it’s funny enough, people will sort of accept the art.

I think in the last year, it’s definitely gotten better. If you look at the last year’s worth of strips and then go back to the books and see like 2002, there’s been a big change. But I still have a very, very long way to go. 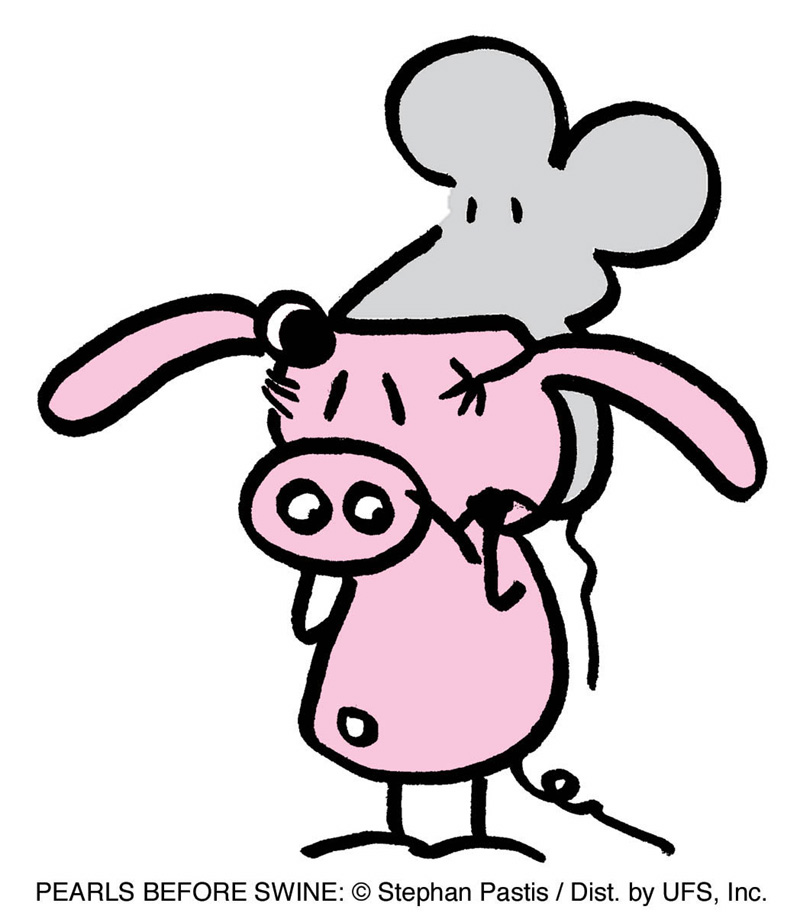 Q: But with your fan base, you probably don’t want to change your style too much, right?

A: Oh, no. But you know what I would like to be able to do is when I draw a tree, I’d like for you to know that it’s a tree.

Q: Do you have a favorite among your characters, or does it just depend on your mood that day?

A: I’d say the latter. But I think Rat is probably more me than any other character. If I had my way, I would probably write nothing but Rat strips because the voice is the most natural to me.

But if the fans had their way, I think the Crocodiles would appear every single day. I try to limit their appearances to about seven or eight times a month, but they have walked away in terms of popularity with the strip.

Q: The strip’s name comes from the New Testament verse, but how did you decide on the concept and characters?

A: Rat was just this little guy I’d been drawing in my law school notebook, and he seemed to just have some honesty or life to him. … Then I submitted him to the syndicates, but the strip was just too dark because Rat by himself will sort of overwhelm you. So I got rejected by everybody a couple of times.

Then I paired him with Pig, and it’s sort of a yin and yang thing. I think Pig sort of tones it down. He’s everything Rat’s not, and the balance of the two works. … I went from never having any syndicate interested in one strip to having three syndicates interested in Pearls.

Zebra, the humanitarian (or zebratarian). Focused almost solely on devising ways to protect his fellow zebras on the plains from their numerous, more able predators. Rat is arrogant, self-centered, fatalistic and quick-tempered. Rat is obsessed with fame, immortality and making a quick buck. Pig is humble (if not painfully aware of his limitations), practical, kind and a little slow in the head. Pig has few aspirations other than to spend his days watching TV and doing nothing productive. Goat is the smart one. He would rather spend his time with his snout in a book than talking to any other characters in the strip, but he's often the reluctant mentor.

Q: Are you into awards like “Best Newspaper Comic Strip of 2003”?

A: It was really cool at the time. When you start out, that’s really important to give you sort of a legitimacy.

The ironic part was Cathy Guisewite (creator of the comic strip Cathy) gave me the award. I had made fun of Cathy just mercilessly. I felt bad because I think I overdid it. … But you know, it’s funny, she was nothing but sweet to me.

The other funny one is Family Circus, because I’ve probably done 30 of those strips where I make fun of it. Bill (Keane) and I are good friends. … He says, “The only time I’ll take offense is when it’s just not funny. So make sure they’re funny.”

I had Osama bin Laden hide in Family Circus for a week. The family was so out of touch and lost in a bygone era that they had no idea who Osama Bin Laden was.

Q: You’ve come under fire in some markets for “Pearls.” Why?

A: It’s always the same thing. It’s pretty much always when I start. It’s almost always older people, and it’s almost always people who would rather see Alley Oop coming back. In this case, it’s some younger ones, too, because Foxtrot’s so popular. No matter how many times you tell people, they will think you canceled Foxtrot.

Q: But what do your fans say?

A: They like that it’s blunt. They like that it relates maybe more to their lives than some of the older strips. They like the stupidity of the Crocodiles. They want to be able to say what Rat says, particularly at his job in the coffee shop. They want to hug Pig. Then everybody wants to kick butt like the Duck does. That’s probably the best part, reaching all the people that I’m able to reach. It’s a lot of fun for me.