Ghosts of Christmas presents past

My sister Vicki remembers every “big” present she received from Santa Claus: the little piano, the pedal tractor, the tetherball, the bicycle, the record player, even the electric train she received when she was 2. “I remember the tracks were really hard to put together,” she says, “but I loved that train.”

I won’t pretend that I remember all my gifts, but when Vicki mentioned her train, I recalled what I received for Christmas that year: a Kodak Brownie Hawkeye camera. I used it to take photos of her and Dad playing with the train and another of Dad alone, in hat and overcoat, postponing his drive to his law office to sit on the floor and play with Vicki’s train.

My husband, Ray, doesn’t remember the presents he received as a child except for one. “When I was 4 years old, I got a little bulldozer and I had it for all of two hours. I left it outdoors, and Dad ran over it with the car. I loved that bulldozer!”

I’m surprised Ray doesn’t remember more of his presents because – beginning at age 9 – he developed a habit of surreptitiously opening his gifts when his parents were at work. He played with them, then rewrapped them with no one the wiser … which is likely the reason he is now so proficient at wrapping packages.

To my embarrassment, I once opened a present that didn’t belong to me. Lesta, who always thought Mom liked me best, handed me a present and said, “This is to you from Mama.”

Had I not been so anxious to see what was inside, I might have read the card which was inscribed “To My Honey.” Only when I saw men’s pajamas did I realize the gift was for Dad.

I’m not sure Mom was ever surprised by a gift. She had an uncanny ability to guess what her presents were. Only one time was she stymied; that was the Christmas that Ray and I bought her an eight-piece set of silverware. Although she hefted and shook the package, she was stumped. Then she handed the package to Grams, who said, “It’s junk!” 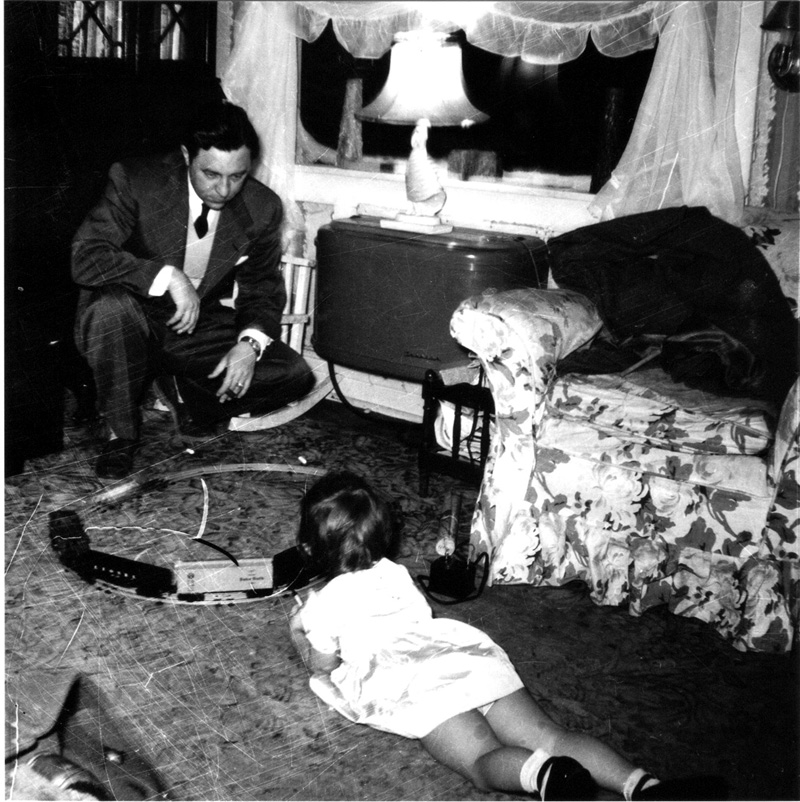 Jest for Grins columnist Marsha Goff shot this photo of her kid sister Vicki playing with her new train using the Kodak Brownie Hawkeye camera that she got for Christmas in 1952. The girls' father, Lew Henry, looks on in his hat and overcoat, postponing his drive to his law office to watch Vicki play.

What Grams, who had managed a scrap yard with Grandpa for decades, should have said was, “It’s metal,” but the word “junk” was enough for Mom to guess silverware. Rats!

I still remember the gift Dad and I bought for Mom when I was a child: a pair of backless, high-heeled, ice blue satin bedroom slippers. I was proud to select my favorite color, overlooking the fact that my mother didn’t care for blue. But I’ll never forget how glamorous she looked when she vacuumed the carpet or made our breakfast wearing those slippers.

My family has a saying – “Your shotgun just went out the window!” – that had its genesis in a pre-Christmas spat between Ray and me. When I asked Ray what he wanted for Christmas that year, for once in his life he didn’t answer with his customary “nothing,” but quickly responded, “I want a shotgun.”

Beats me why. He’s not a hunter. But I bought him one anyway, taking Dad with me to ensure that I purchased the right gun. It was wrapped and ready when, a week or so later, Ray and I had a serious disagreement. I don’t remember what the argument was about, but more than likely it had something to do with the size of a Christmas tree since that is usually the cause of our annual “Fight before Christmas.”

The conflict ended when I stomped out of the room after shouting, “There goes your shotgun, boy, right out the window!”

The threat proved untrue, and Ray still has the shotgun, although I’m not sure he’s ever shot it. But Ray’s shotgun demonstrates that sometimes what you want is more important than what you need. That is why we once gave a motorcycle to Ray Jr. and a huge Burmese python to Greg.

This year, I wish you the gift of appreciating the things that really matter. Merry Christmas!

Help is on its way, but reopening Kansas schools won’t be easy. With the state’s economy in free fall and ...

The Topeka Capital-Journal published a stunning story this week on foster care in Kansas. It prompts the question: ...

Throughout this pandemic, we’ve gotten used to waiting on, listening to and then either criticizing or thanking ...

Opinion: There’s plenty for lawmakers to do

The Kansas Legislature will return on May 21 with final, sine die adjournment. In short, the Legislative ...

Opinion: Mayors, the other first responders

Among U.S. governors, Kansas’ Laura Kelly and her advisers rank among the clearest and most decisive in ...

Two months ago, on Saturday, Feb. 22, Mike Hughes climbed into his homemade rocket on a launchpad in the desert ...