Colleagues, alumni, friends and students lauded her as a skilled educator and gracious leader.

“She has been an exceptional leader in helping us through some very difficult times,” said Jackie Mitchell, of Mayetta, a member of the Haskell Board of Regents and a tribal council member for the Prairie Band Potawatomi Nation.

Swisher, 63, announced in May her plans to retire and said the timing was right as the school neared the end of a five-year strategic plan.

Recently, university leaders have struggled with funding issues as the Bureau of Indian Affairs within the U.S. Department of the Interior sets its budget.

The school has had to rely on more volunteer and adjunct faculty members and make other changes as records show its classroom budget stayed at $9.1 million for 2003 through 2005.

Faculty, regents and alumni praised Swisher for her work during her seven years as president in light of the budget issues she dealt with.

“I know that she’s agonized – over very real – and very tough decisions that must be made when resources don’t match need. But she’s never been filled with such despair that she’s allowed herself to believe that we, Haskell, are defeated,” said Venida Chenault, Haskell’s vice president for academic affairs. 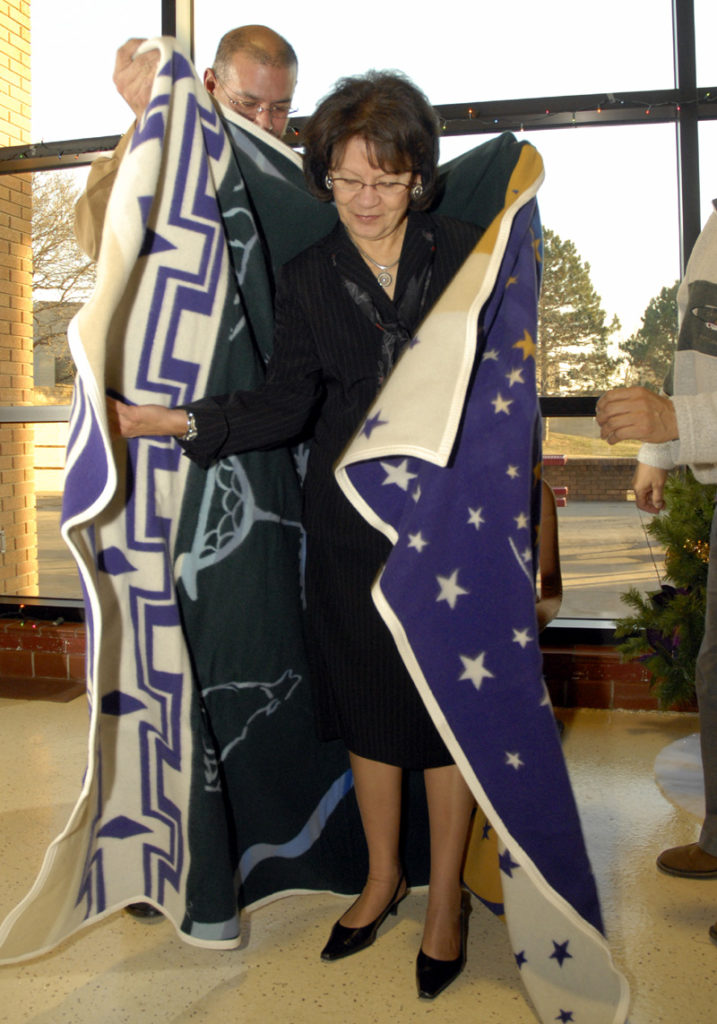 Karen Swisher, president of Haskell Indian Nations University, accepts a blanket on behalf of the Board of Regents from Regent Paul Ninham. The gift was part of a farewell reception for Swisher, who is retiring after seven years as president.

Swisher says she is helping the Haskell Board of Regents and federal officials organize the search for her replacement. She will have no say in the decision.

The university stopped accepting applications Dec. 1, and it received “a good pool,” she said.

While Swisher’s term ends Dec. 31, Lori Tapahonso, a university spokeswoman, said leaders at the Bureau of Indian Education would name an interim president before Haskell students return in mid-January for the spring semester. Students will finish their fall semester this week.

The selection committee will involve members of the Lawrence and Haskell communities as well as some from the national stage, she said.

Tapahonso said she did not know the specific number of applicants. Names will be made public when interviews are conducted sometime in mid-January, she said.

Haskell Interim Dean of Humanities Denise Low-Weso said leaders should hire someone with a firm understanding of American Indian culture and history and the workings of the Bureau of Indian Education.

“We definitely need a strong leader because of the challenges – the shortfalls of funding. That’s our main problem right now,” Mitchell said.

“We need somebody that is going to be firm with the Department of Interior,” said Paul Ninham, a Haskell regent and councilman of the Oneida Nation of Wisconsin.

‘Stepped up to the plate’

As the search process continues, Friday was a day for reflection on Swisher’s presidency. She is a member of the Standing Rock Sioux Tribe in South Dakota and started on the Haskell faculty in 1996 before becoming president in 1999.

Her tenure has been marked with some trying times other than the funding difficulties.

She had to lead the university through a controversy when the Haskell Foundation was forced into bankruptcy after its then-director, Gerry Burd, stole more than $100,000.

“At the time the foundation had collapsed, she inherited everything that went along with that. Despite this, she stepped up to the plate to help Haskell,” Chenault said.

During a short speech, Swisher mentioned the tradition that allows graduating students to write their own messages to be read as they walk across the stage.

“In those statements, you hear sometimes of their struggles, but almost always about their hopes and dreams,” she said. “They’ve had an experience at Haskell, and more and more we hear ‘I’m going on. I’m going on to get a graduate degree.'”