‘The best band you never heard of’

They had short hair in an era when everybody had long hair. They wore thick glasses when only nerds embraced the look. They played tight, blistering pop songs when overproduced stadium-rock anthems and repetitive disco tracks were the norm.

And they were from Wichita at a time when cool bands were never, ever, ever from South-central Kansas.

They were known as The Embarrassment.

From the tail end of the 1970s through the early ’80s, the Kansas quartet established itself as the most promising of the state’s sonic heroes. As the years since its heyday pass by, The Embarrassment continues to foster a national reputation as “The best band you never heard of.”

Still never apt to take the easy route, Embarrassment members are reuniting for a trio of shows … a staggering 17 years since their last live gig together. Tonight will mark their return to Lawrence with a showcase at Liberty Hall, 642 Mass., following Friday and Saturday gigs in their hometown. 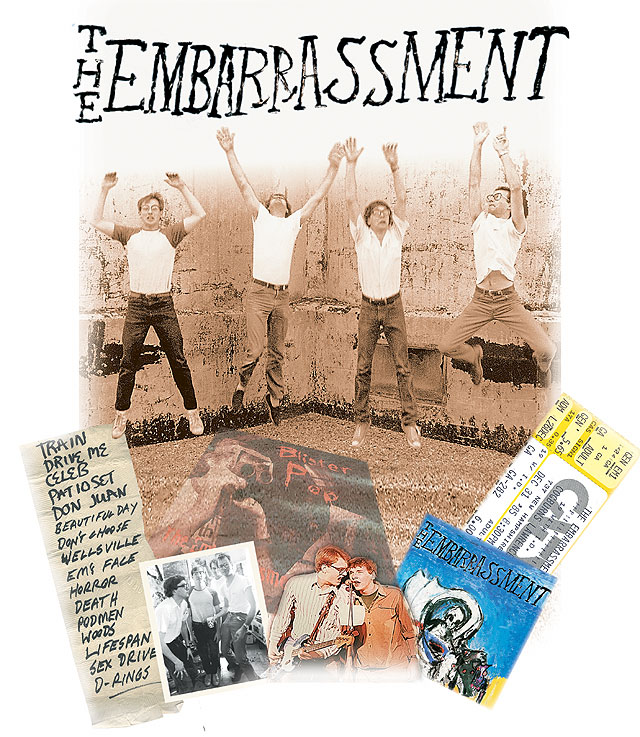 The group – affectionately known as the Embos by fans – assembled in Wichita last week to begin rehearsing the 25 songs that will be performed.

“I was really scared to come back and do this,” says bassist Ron Klaus, who joins Goffrier, singer John Nichols and drummer Brent “Woody” Giessmann in the lineup.

“I’m not a musician. I haven’t had my bass out of its case for about 15 years. I had to work extra-special hard rehearsing at home a couple hours a day. I got my fingers toughened up slowly. They’re actually kind of numb now.”

The genesis of the get-together can be credited to Dan Fetherston of the Brooklyn band Oxford Collapse. He decided to make an Embarrassment documentary after releasing a cover of the group’s song, “Celebrity Art Party.”

“He wanted to do something about a cult band that doesn’t seem to die in people’s memories,” Klaus explains.

Fetherston, an NYU Film School graduate, arranged a meeting with Goffrier and Geissman, who both live in the Boston area.

“Brent and I aren’t too far apart, but we’ve been so busy with everything we hardly ever see each other. We were interested in sitting down and reminiscing with him, and complimented by the attention,” Goffrier recalls.

Embarrassment members were spread all over the country (none had lived in Kansas for years), but the filmmaker tracked them down. He found Nichols in Orlando, Fla. Then located Klaus in Phoenix.

“Nobody was really too sure where Ron was,” Goffrier says, laughing.

Before long, it was clear that the movie would be much better with a modern reunion as its centerpiece. Somewhat surprisingly, everyone in the group instantly embraced the concept.

“We don’t dislike each other or anything,” Klaus says. “There was no reason NOT to do it.”

“For a certain group of people who are now between, say, 38 and 46 – and who came from Wichita, McPherson, Emporia, Newton – The Embarrassment were iconic,” says Steve Wilson, manager of Kief’s Downtown Music, 823 Mass.

“They were a beacon. They were like, ‘You can wear glasses and be arty and nerdy, and it’s okay.'”

Wilson is also the former singer of The Thumbs, a Lawrence act that was a contemporary of The Embarrassment.

He says, “They were really good at bringing a Kansan sensibility to what was heretofore an English/New York art punk music. They never adopted the affectations that were tempting to provincials. They were just absolutely themselves. And as a consequence, they were more interesting than a lot of other bands that were covering some of the same territory.”

More on the Embos

For Mona Katz, The Embarrassment represented a life-changing experience.

In the early ’80s, the Lawrence music fan watched helplessly as crucial venues such as Off the Wall Hall and the Lawrence Opera House closed. Then her favorite group, The Embarrassment, disbanded.

“I went home that day after going to the bank and signing papers, and I looked up (singer) John Nichols in Wichita information,” she remembers. “I called him and said, ‘Hello, you don’t know me. But I just bought a bar in Lawrence so that you would have a place to play.'”

The plan worked, and a New Year’s Eve show that year was the first of several reunions The Embarrassment enjoyed during the Reagan era. Katz’s club was originally called Cogburn’s. She soon changed the name to The Bottleneck.

“It is completely a true statement that there would not be a Bottleneck if there had not been an Embarrassment,” she says.

“This town adopted them,” she says of the band. “We rooted for them. We wanted them to make it. It’s not like I knew them, but they were kind of like a member of the family.”

Katz sold the club in 1989 – the same year as the last Embarrassment live show.

She says, “When people ask me who my favorite band is, I say, ‘It’s a band from Kansas that you’ve probably never heard of called The Embarrassment.’ And I know I am not the only one out there.”

The Embarrassment always seemed on the precipice of stardom. 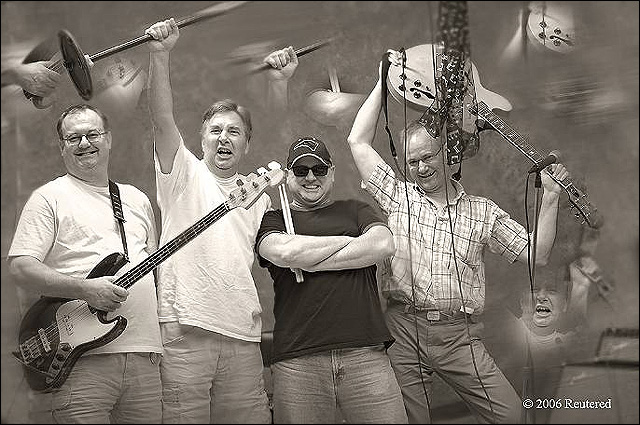 Although the four students had originally come to Wichita State University to study art, their attentions quickly became divided by music.

“We had art studios and rehearsal space for the band all in one building,” Goffrier says.

Once the Embos had effectively taken charge of the Wichita music scene, they began developing fan bases in far-flung places like New York City and Ottawa, Canada. They landed coveted spots opening for underground idols The Ramones, Iggy Pop and John Cale of The Velvet Underground – who offered to produce an album.

Songs like the debut single “Sex Drive,” “D-Rings,” “Drive Me to the Park” and “Elizabeth Montgomery’s Face” displayed the group’s balance of commercial hookiness with lyrical and musical quirkiness.

The ensemble put out several releases on Lawrence’s Fresh Sounds label. Interestingly, the group was included on a few cassette-only compilations issued by Sub Pop Records – the label that a few years later would launch Nirvana and the grunge scene.

“We played best live. We made some nice recordings, but it was a big scene when we played. People danced their butts off,” Klaus says.

After their initial 1983 breakup and the 1985 Bottleneck reunion, the members gathered again in 1988 to record a collage of new and revisited material. The effort found a home on New Jersey-based Bar/None Records, which continued to release compilations of the defunct band throughout the ’90s.

“Revisiting the songs, they really are well-crafted,” Klaus says. “They seem to still have life in them.”

‘Who are those guys?’

Nowadays, Embarrassment members aren’t too concerned with the music industry. (Drummer Giessmann is the only one who still actively performs.)

Goffrier put his college degree to good use and teaches art at a public school. Giessmann is a licensed counselor who runs a nonprofit center for musicians battling substance abuse. Nichols has been employed by various airlines over the years and is currently with USAir. Klaus works for a Southwestern sound company but is reportedly interested in moving to Costa Rica.

Three of the four members are in their late 40s, with Klaus having turned 50 this year.

The bassist recalls that the first song the four friends ever played together as a group was Iggy Pop’s “I Wanna Be Your Dog.” This week at their Wichita rehearsal space they decided to try and relearn the chunky rock anthem.

Klaus says, “We listened to an old recording of it, and we were like, ‘Who are those guys?’

“There’s one thing we realized: We can’t possibly play as fast as we used to.”