Lansing ? When the woman running a successful prison dog-training program helped a convicted murderer escape, many worried the program would be shut down. But that never was an option.

For two years, the Safe Harbor Prison Dog Program has been a fixture at Lansing Correctional Facility, where “In Cold Blood” killers Richard Hickock and Perry Smith were executed in 1965.

Prison officials tout it as helping both those rescued from doggie death row and their inmate trainers.

But on Feb. 12, Safe Harbor president Toby Young, 48, spirited trainer John Manard, 25, from prison in a dog crate inside her van. For nearly two weeks, they were on the lam until caught in Tennessee.

“It terrified me, I didn’t want to lose the program,” said Jerry McMullin, 62, who has trained about 50 dogs. He has been in prison since 1980 for murder.

It also bothered Raymond Podrebarac, 48, who has trained about 60 dogs and likes to work with the abused ones.

“You can’t hold the dogs responsible,” he said.

For the 100 inmates training some 40 dogs on any given day, their fears were for naught.

“Closing that program wasn’t a thought that occurred to me. That program is much bigger in its accomplishments than one person,” said warden David McKune, who oversees the 2,500-inmate facility.

Safe Harbor brings dogs from animal shelters – where many would otherwise be euthanized – to inmates who turn them into love sponges to be adopted as pets. Since Safe Harbor started in August 2004, some 1,200 dogs have found homes – including 300 since the escape. 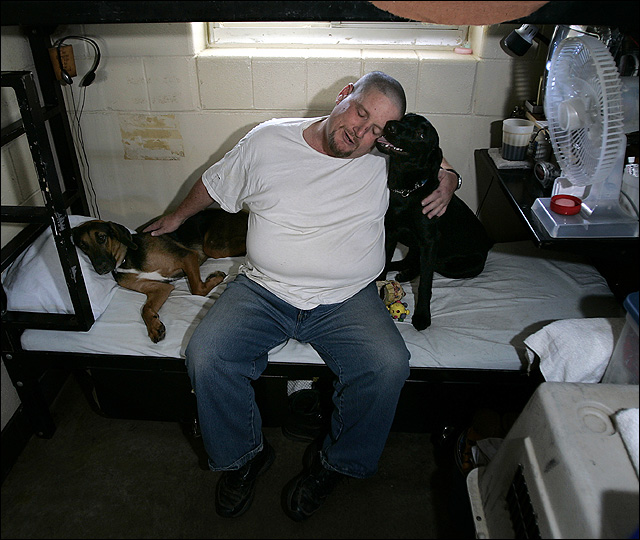 Inmate Raymond Podrebarac shares his cell with two dogs at the Lansing Correctional Facility. Podrebarac is one of a handful of inmates at the prison participating in the Safe Harbor Prison Dog Program.

Young was a trusted fixture at the prison, known simply as “Dog Lady.” She pleaded guilty in July and is serving 21 months in prison; Manard is back in his cell, where he spends 23 hours a day.

“You feel so betrayed by one of your own. How could she do that? How could you do that to the people and program?” McKune said.

The escape occurred when a guard failed to check Young’s van as she left the prison with Manard. Since then, the van stays outside in the parking lot and the dogs are walked to and from the prison by staffers.

Dogs to the rescue

Prison life never is good, but the dogs can make it a little more tolerable, participants say.

“It does serve to alleviate some of the violence issues. It’s not the answer, but it helps a lot because it helps the overall tone and attitude on a daily basis,” McKune said. “They may be having a crummy day and a dog comes up and starts licking them and things look better for them.”

Janet Florence, Safe Harbor incoming president, said even the toughest inmate can get emotional when he sees an abused dog.

“We’ve had inmates cry. You can’t help it when you see the shape they’re in,” she said. “They feel they just have to fix them.”

The first prison program to train service dogs was started in 1981 in Washington state by Sister Pauline Quinn, a Dominican nun. Similar programs to train dogs as service animals or pets sprang up across the country, including California, Massachusetts, Missouri, Maine, New Hampshire and Wisconsin.

McKune said he believes Lansing has the largest prison-based dog adoption program in the country because the dogs are trained quicker as pets, rather than service animals.

Florence said more dogs trained and adopted means more that can be rescued from shelters. The program, run by volunteers, receives no tax money and operates from donations and the $150 adoption fees.

“We still want to save as many as we can,” Florence said.

It takes about two weeks to teach basic commands such as sit, stay, come, lie down and to housebreak dogs and teach them to walk on a leash. After they are trained, spayed or neutered and vaccinated, they are ready for adoption.

Each Saturday, Safe Harbor dogs travel about 20 miles to a pet store in Shawnee for a chance to be adopted. Recently, all but two of the dozen dogs were adopted, although one later was returned because it was too aggressive around children. It later was adopted by a couple without children.

“We tell them if it doesn’t work out, bring it back and we’ll find one for you,” said Brett Peterson, the prison’s executive officer who works with the program. “It doesn’t happen that often, but when it does, we take the dog back and wait for the right family.”

“We like the thought of rescuing a dog,” she said.

As for the escape, Buchholz said, “That was a one-time incident. They do good things with the program and that didn’t affect us in any way in our decision.”

James Stanley, of Olathe, agreed as he filled out the paperwork for Taz, a black mix-breed with short legs and curly tail. 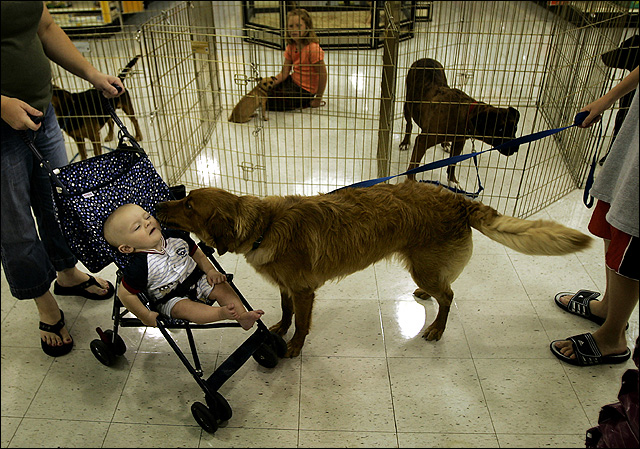 A dog available for adoption greets 7-month-old Conner Lowe with a lick during an adoption fair at a pet store in Shawnee. The dog is among several hundred abused and neglected dogs that have been trained for pets through the Safe Harbor Prison Dog Program at Lansing Correctional Facility.

“It reflects on the security at the prison and the individuals, but not the program,” he said.

Taz was trained by Bovi Lewis, 42, in prison since 1992 for rape and attempted murder. He lives an area with a dozen other trainers and their dogs.

“Taz was such a loving little puppy. I look on it as karma. I’m doing something to help another living being,” said Lewis, holding his sixth charge, a dachshund named Rusty. “Sometimes when you want to help somebody they get offended. A dog isn’t like that.”

Outside Lewis’ unit, a wading pool offers the dogs a cooling splash under the summer sun. A nearby penned area allows dogs to frolic in the shadow of guard towers and razor wire fences.

On the other side of the prison yard, Podrebarac, in prison since 2001 for soliciting sex with a minor, shares his cell with Lacey, a coonhound found chained to a concrete block, and Meagan, a black lab that lost its left eye when tossed from a moving vehicle.

“I would like to have a couple of minutes with the owner who did that,” said Podrebarac, his lips smiling – but not his eyes.

When it comes time for a dog to leave, it’s a day filled with emotion.

“It’s always like a little bit of me going with them,” McMullin said. “Sometimes there are some tears, but we know it’s best for the dogs and within a few minutes we have another dog and no time to cry.”