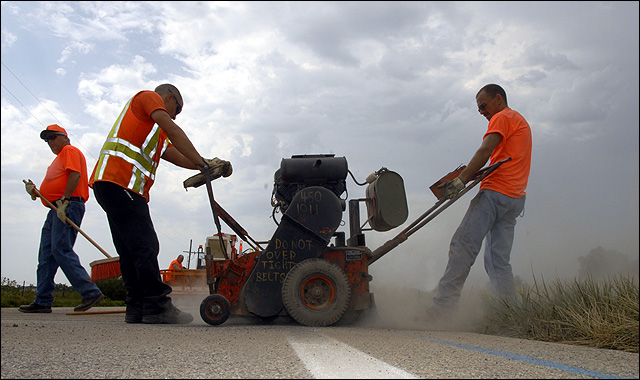 Kansas department of transportation employee Gary Fox, at left, watches traffic while Sheldon Monroe, center, and Rusty Davenport work on a grinding machine just north of the Baldwin Junction, the intersection of U.S. Highways 59 and 56. The KDOT workers spent Monday carving rumble strips, grooves 1/8 of an inch deep, into the asphalt on U.S. 59 to warn north- and southbound motorists of new stop signs at the intersection.

Baldwin Junction ? It’s a project that was rushed in the midst of the planning process, and state highway workers ran into difficulties again Monday at making the notorious Baldwin Junction 10 miles south of Lawrence a four-way stop.

“This is just not the way to do it. We need more planning time,” said Earl Bosak, area engineer for the Kansas Department of Transportation.

Bosak and his crew were ordered to put up the stop signs on U.S. Highway 59 Friday after KDOT Secretary Deb Miller’s office had received calls demanding the signs be implemented following the accident one week ago that killed Charlene Pohl, 84, of Baldwin.

The crew was originally given until mid-August to make the change, and they just received the equipment on Friday, Bosak said.

KDOT workers hope they can finish the work today after working most of the day there Monday. They discovered they needed glue, which would not be available until today, for the white stop bars that would mark stopping points on U.S. 59, Bosak said, and they were also crossing their fingers that a crew could complete the northbound rumble strips by Monday evening.

Area residents and drivers gave mixed reactions to the four-way stop plan at the dangerous intersection, where Pohl and two others have died in accidents this year.

Marvin Jardon has lived in a home along U.S. 59 near the junction since 1957. He said this year seems to be one of the worst for accidents. He would rather see a traffic light at the junction than the four-way stop.

“I think it’s going to be an awful mess (deciding) who’s got the right-of-way,” Jardon said. “Others have said it’s going to take a while before drivers from the east or west (on U.S. Highway 56) trust anybody (to stop) from the north or south.”

Some are worried that the drivers accustomed to not stopping will miss the new sign.

“I think they need to put a traffic light in. It’s just too much traffic. No one will see the stop sign, and I don’t think it’ll work,” said Jackie Gomez, of Baldwin.

But Bosak said the rumble strips, the warning signs and flashing lights should do enough to alert drivers. Things worked smoothly for the most part Friday afternoon when the signs were first put in place, he said.

The signs were covered later that day, on the advice of KDOT’s legal department, because the rumble strips were not in place.

It took KDOT workers three hours Monday morning to install the rumble strips in the southbound lane on U.S. 59, and then the installation began on the northbound lane. 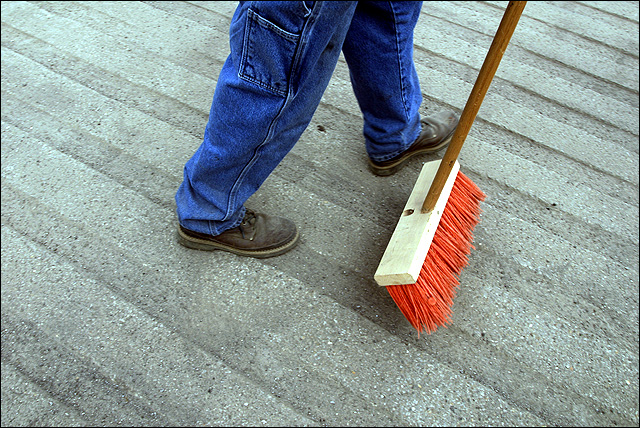 The completion of rumble strips on U.S. Highway 59 at the Baldwin Junction intersection with U.S. Highway 56 is one of the last steps needed to implement a four-way stop.

Lt. John Eichkorn, a Kansas Highway Patrol spokesman, said the final report on Pohl’s accident was still being processed, but he said the investigating trooper had determined through witness statements that Pohl had stopped her vehicle at the stop sign on U.S. 56 and then pulled to the west into the lane of traffic on U.S. 59 where she was struck by a northbound semi-trailer, which had the right of way.

KDOT engineers had already studied the junction after an accident in April that killed two Spring Hill teenagers, who were coming from the same direction as Pohl. After that, engineers decided to implement the four-way stop.

Area residents have complained for years about visibility from U.S. 56 and the 55-mph speed limit at the junction.

Lynn Killingsworth, of Baldwin, said the stop signs on U.S. 59 will make her feel safer.

“I had trouble seeing when I was doing my shoulder checks,” she said about trying to turn right from U.S. 56. “Oh sure, most definitely they need to do something different there.”

More about the intersection